The NRC is a Captured Agency, Their Conflict of Interests have Made Them Dangerous Overseeing Nuclear Power in USA

This shows it clearly.  A known nuclear plant risk, with a simple fix, and the NRC decides to "do nothing" in fact rejecting multiple attempts from engineers within the NRC to push for the required safety upgrades.

The NRC itself claims the risk to be just 1E-4 (using confusion at every chance to get people to turn off their brains).    1E-4 risk of a meltdown per reactor year.   Now what does that really mean?

Well let the NukePro shed some light with clarifying numbers. 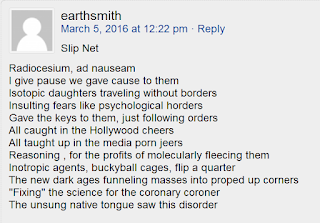 This means in 10 years, there is a one in 10 chance of a meltdown in the USA.  Again, that is if we trust the NRC low-ball numbers.

This would be a VERY smart bet to implement the safety features.   Yet the NRC refuses to put this cost onto the dying nuclear industry.   Clearly they do not have our best interests at heart.

The "NRC Seven" have been unable to get the NRC to take effective safety action, and are so frustrated that they have gone outside the NRC to file a petition.

I can imagine their future promotions will be greatly curtailed, but good on them!


Here is the petition
http://www.scribd.com/doc/302275655/NRC-employees-petition-for-corrective-action

SYRACUSE, N.Y. – Seven electrical engineers who work for the U.S. Nuclear Regulatory Commission have taken the unusual step of petitioning the NRC as private citizens in hopes of compelling regulators to fix a "significant safety concern'' that affects all but one of the nation's 100 nuclear plants.


The petition filed this week by the NRC Seven, as some call them, is similar to what anti-nuclear activists or other outside watchdog groups would file to raise a concern with the NRC.


The engineers say there is a design flaw in the electric power systems of all but one of the 100 U.S. nuclear plants. The flaw prevents the detection of certain disruptions on power lines connected to the plants. If a degraded power line were called into service during an emergency, the reactor's motors, pumps and valves could burn out, preventing a safe shutdown.


No such catastrophe has occurred. But since discovering the flaw in 2012, NRC staff have looked back and identified 13 events since 2002 when an undetected electrical fault could have resulted in serious problems during an emergency plant shutdown, the employee petition said.