Another Nuclear Plant Bites The Dust, Fort Calhoun To Be Closed This Year

And good Riddance!  Fort Calhoun Nuke Plant Is To Be Closed 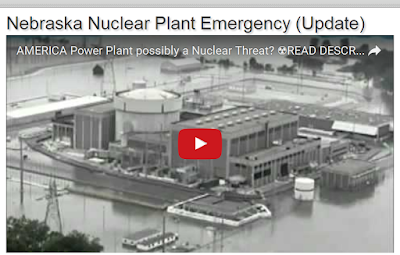 Continued operation of Fort Calhoun Station is not in the long-term financial interests of Omaha Public Power District or its customer-owners, President and CEO Tim Burke told the OPPD board Thursday.
Senior OPPD management is recommending engineers split their last atom by the end of this year and begin the decommissioning process.
“Overall this was a financial decision. The bottom line was that it is just not economically viable to continue operations there,” OPPD spokesman Mike Jones said in an interview following the meeting.


OPPD ratepayer Mark Welsch, who attended Thursday’s meeting, commended the utility’s management team and board for taking up the issue. Welsch is the head of the Omaha chapter of the advocacy group Nebraskans for Peace. He said the utility should be tilting toward renewable sources of energy, like wind.
“I’m very proud to be a customer-owner of OPPD right now,” he said. “The board is taking a hard look at a very hard potential decision it will have to make.”
If the board follows through on the recommendation, OPPD’s wind and renewable generation will make up 49 percent of its energy portfolio by 2020, up from 38 percent that is currently forecast.

OPPD in its 2015 annual report estimated that the costs to decommission Fort Calhoun would be about $884 million. The utility has socked away about $373 million for those costs.


Stephen Burns, chairman of the U.S. Nuclear Regulatory Commission, recently sat down with The Energy Times for a broad discussion about nuclear power in America. This is the last of a two-part series.
ENERGY TIMES: For existing nuclear plants, will there be universal attempts to extend license goings for another 20 years, up to a total of 60 years or more?
BURNS: For 60 years - certainly yes. About 80 percent of the existing fleet has received initial license renewal for 40 to 60 years.  For a plant that came online in the mid-1980’s, 0 years gets you to 2025 and another 20 gets you potentially 2045.  The industry is looking at the possibility of moving from 60 to 80 years.
ENERGY TIMES: To get from 60 to 80 years - will it require massive capital investment?
BURNS: I don’t probably have any particulars on the investment.  There’s going to be some costs with that.

TY, yes I lived in Illinois, I know how incredibly corrupt it is.   No coincidence with all the race bating and the emergence of Obama from that area.