Earthquake Alert Re-Upped, 7.2 on the "American Plate" The Whole Plate Is MOVING! 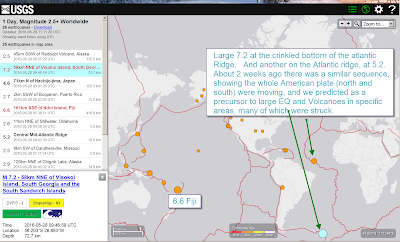 The entire North and South American plates are moving again in unison.  This is a bad sign, and forebodes large earthquakes and volcanoes.

See my prior EQ alert from May 14th, the chart here shows today's new activity. http://nukeprofessional.blogspot.com/2016/05/eartquake-alert-issued-by-nukepro-for.html

Large 7.2 at the crinkled bottom of the atlantic Ridge.   And another on the Atlantic ridge, at 5.2.   About 2 weeks ago there was a similar sequence, showing the whole American plate (north and south) were moving, and we predicted as a precursor to large EQ and Volcanoes in specific areas, many of which were struck.