This is a draft article, too busy finsihing my own totally non GMO, non GE, organic garden.

And they were trying hard, lots of cardio, weight training.

Its the food people. What else could it be? They are trying hard and still not even 1% can achieve "being in shape".

Then, after planting a heirloom crop of all non GMO products into the greenhouse and planning the direct plant for later today…..

I saw theNational Academies Press saying that GMO /GE crops are "pretty much OK". They also claim that they back up their assertions with DATA.

THEY DO NOT back up their assertions with data, nor with links to the referenced studies. They use weasel words to an amazing degree. They take pot shots at "natural methods".

They express concern and dismay that food testing is hard because it is complicated to increase the potential bad stuff in the food, to get quicker test results…and instead, OH MY GOD, they sometimes have to resort to feeding the actual GMO / Roundup treated food to the animal. The absurdity of it all! 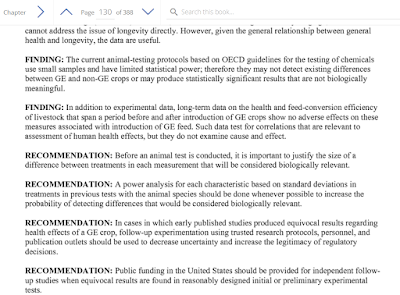 Then they complain, that these "whole food" tests are kind of a joke, because you can't be sure who is funding them, and because we don't know how long of a test is good enough (90 days is a long test in their book)that we just maybe should use that type of "whole food testing"

I'll comment more as time allows.   For now I recommend you skim through it yourself.   Its looks like a massive sellout by the scientists who were given our public trust....BUT, and this is different, with so many obvious weasel words used in the report, that it would be hard to sue or convict any particular participant or group.

Also, it is still labelled as a "prepublication copy", another disgusting oversight or just intentional weasel method.
Posted by Stock at 2:01 PM