The "European Union" is an interesting construct.   The basic theory is that the primary purpose of the "Union" is to allow centralized control to the real powers that be, those who are pushing for a New World Order.    Basically it's the super rich, the Rothschilds, Rockefellers, Bilderberg types.

Many of these types are sociopaths, which is a whole topic onto itself, of which I have several articles on the blog.    These are some of the most dangerous people on the planet.    Bottom line, they have no conscience, and power and manipulation over other people are very important to them.   Sociopaths will take unnecessary risks that are way out of proportion to the possible gain, especially when the risks can be primarily foisted onto other people.

Which brings us to our point.    Nuclear energy has so clearly failed at every level, but in a sales pitch it still looks like "a free lunch" to those driven by greed and power. 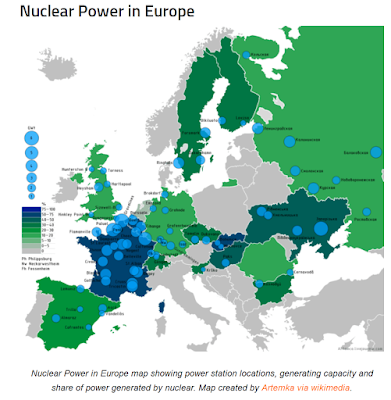 There are a few categories of people who are still motivated for nuclear, still fooled by nuclear power, to name a few:

1) The stupid who think they are smart (say readers of Popular Science, ruh roh, I used to be one)
2) The uninformed
3) The "true believers", perhaps smart people, Blinded By Science.
4) Profiteers of the Nuclear Industrial Complex /Cartel

The failures and dangers of nuclear are so obvious, so clear-cut, that rather than belabor them here, I simply refer you to this entire blog ---Nukepro

So, per the below, clearly the EU is not driven by altruistic motives in pushing for nuclear.   Europe is the worst place in the world for nuclear, nuclear disposal, and a nuclear reactor.   Not that there is a good place for any of that, just that is it the height on insanity to load Europe with nuclear.


Citing a strategy paper from the EU on Tuesday, "Spiegel Online" reported that the European Union plans to defend its technological dominance in the nuclear sector.


According to the document, the European Union's 28 member states should strengthen cooperation on researching, developing, financing and constructing innovative reactors.


The paper is reportedly the basis for the European Commission's future nuclear policy and is expected to be passed by the European commissioner for energy union on Wednesday. The report would then be presented to the European Parliament.