Would an Earth Magnetic Reversal Result in Earth Being Stripped of Its Oxygen? 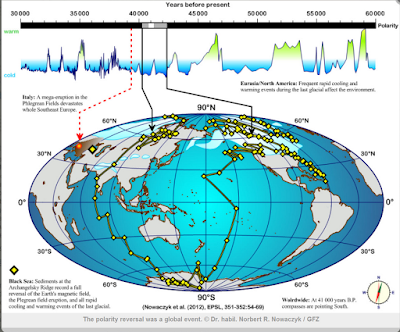 The author "CindyDiesintheEnd" is kind of a taunting arsehole, but does finally provide some decent links, and some degree of interpretation, but not in any impressive, helpful, or convincing way.
I think I can sum up the "Cindy" take as this...the Earth is going to be stripped of all its oxygen and
that it will happen in the next few generations of humans.

I have personally been looking at the pole shift issue for many years.    Here is one article I wrote:

I believe a "pole shift" occurred about 40,000 years ago, and with it, of course, came reduced magnetic field (aka shield) and much higher gamma radiation from space and sun.    It also marked a massive uptick in human "cave art" indicating quite possibly that the increased gamma had caused a successful human mutation.   We got lucky on that one.

Oxygen was not stripped and there was not a mass extinction.    We have plenty of black swans, we don't need to take white ones and paint them black.

Sure appreciate any and all comments!

Briefly, I digress to Tony’s wild goose chase with Einstein and Velikovsky. True, he was one of the last to have Einstein reviewing his manuscript, but it had much more to do with common cultural ties and perhaps nostalgia, more than anything else.

Einstein spent most of his time with Velikovsky trying to talk him out if some of his ideas that challenged “conventional science”. This was ironic given his views on censorship. However he felt Velikovsky’s ideas would be more “palatable” if they were a bit “toned down”.

Towards the end of his life Einstein had grown a bit cynical of the Establishment, and a bit bored with relativity.

And that brings the Gift of Fire, to make his Unified Field Theory work, he decided he had to “get around relativity”.  In the 1700 or so manuscript pages that were “found” behind Dukas’ archival office in Princeton’s filing cabinet just shortly before the whole batch was shipped to Jerusalem in the 80s, is your answer to defeating the answer to the riddle.

Its very unlikely those pages accidentally ended up there. Dukas was devoted to her rask, detail oriented, and fastidious. (they were found after she passed, i believe) I don t believe much progress has been made working with those pages.

Which perhaps is fortuitous, because the fact our increasingly weakening magnetosphere, is probably going to make your glorious paper as useful as a paperweight. Ok, we’ll maybe less so.
It was not mentioned before, but there is lag time between what is happening with the sun, and the effects on Earth, here. So I wonder what else happens? Well, if you get past the lousy weather, the Earth wooziness of a excursion or reversal, breathing is going to become a real problem. That’s gonna leave a mark.  Winner of the intergalactic lottery, remember?
Ben, that is all I can get on that, at this time.
Now, I am finding translations or doing them myself on some articles that of are substantial interest.  In the meantime, I would ask you to reconsider this article you discussed previously in light of what’s going on now.

http://www.sciencedirect.com/science/article/pii/S0012821X14001629#br0220
this may help you further flesh out some aspects. Be aware that always, what happens at the Sun, affects here.

[1] The discovery of the reversals of Earth’s magnetic field and the description of plate tectonics are two of the main breakthroughs in geophysics in the 20th century. We claim that these two phenomena are correlated and that plate tectonics controls long-term changes in geomagnetic reversal frequency. More precisely, geological intervals characterized by an asymmetrical distribution of the continents with respect to the equator are followed by intervals of high reversal frequency. We speculate that the distribution and symmetry of mantle structures driving continental motions at the surface influence the equatorial symmetry of the flow within the core and thus change the coupling between the dipolar and quadrupolar modes which controls the occurrence of reversals.

http://www.nature.com/ncomms/2014/140606/ncomms5014/full/ncomms5014.html
Momentum transport in the solar wind erosion of the Mars ionosphere (Article)
(As u know, Mars and Venus do not have a strong magnetic field, but we do know at some point, their atmosphere got sucked into space, so to speak)
So um, like, at what point does our weakening fields cause an acute increase of atmospheric loss of oxygen ions from earth through magnetospheric processes?
And my personal doomy fave:
http://onlinelibrary.wiley.com/doi/10.1002/2014JA020549/abstract
Abstract
The Earth’s dipole moment has been decaying over the past 1.5 centuries. The magnetosphere thus has been shrinking and the chance of geosynchronous magnetopause crossings has been increasing. We quantitatively evaluate the increasing exposure of geosynchronous orbit in the solar wind caused by the decay of dipole moment and the variation of solar wind condition, and study the possible situation if such decay persists for several more centuries. The results show that the average subsolar magnetopause distance would move earthward by ~0.3 RE per century, assuming the linear decreasing of the Earth’s dipole moment at present rate. The minimum solar wind dynamic pressure required for geosynchronous magnetopause crossings will decrease by ~4 nPa (2 nPa) in the next 100 years under northward (southward) interplanetary magnetic field. Under normal solar wind conditions, the noon region of the geosynchronous orbit will be exposed to the solar wind in the next few centuries. These results suggest that the secular variations of geomagnetic field are of paramount importance for our understanding of space climate

Well somebody starting to get it. Too bad their assumption are a bit wrong and timing is off.
But see,

So now might be a good time to get around that whole relativity thing. Be glad you have some resources available you can talk to. That guy that helped build the space shuttle might be useful.
Good Times.

will be back to read comments eventually, and will be posting more tools needed, in the meantime, happy hunting guys and gals

PSS-brilliant albeit probably unreliable and a bullshitter, but check out Eric Dollard’s lectures, especially on the History of electromagnetism. Probably gonna need to grasp some of that, for starters

CindyDiesintheEnd
December 9, 2014 at 2:30 pm #11784
Drat! This is what happens when one can’t use their secretary for “Internet stuff”. Mea culpa, some of the above links are frakked, so lets try a different way.
Google this, u guys already have a link
Oxygen escape from the Earth during geomagnetic reversals: Implications to mass extinction. Yong Weia, b, c, , ,; Zuyin Pub,; Qiugang Zongb,; Weixing Wana, …
Plate tectonics may control geomagnetic reversal frequency
http://onlinelibrary.wiley.com/doi/10.1029/2011GL048784/full
Pétrélis, F., J. Besse, and J.-P. Valet (2011), Plate tectonics may control geomagnetic reversal frequency, Geophys. Res. Lett., 38, L19303, doi:10.1029/2011GL048784.
http://gsabulletin.gsapubs.org/content/82/9/2433.abstract
Faunal Extinctions and Reversals of the Earth’s Magnetic Field
JAMES D HAYS (oldie but goodie)
(Party in the House for AGWs followed by terrible, horrible extinction–yay, well food for thought)
A Model of Correlated Episodicity in Magnetic-Field Reversals, Climate, and Mass Extinctions
David E. Loper, Kevin McCartney and George Buzyna
The Journal of Geology
Vol. 96, No. 1 (Jan., 1988), pp. 1-15
http://www.jstor.org/discover/10.2307/30064982?uid=2460338175&uid=2460337935&uid=2&uid=4&uid=83&uid=63&sid=21104804690611
Enhanced atmospheric oxygen outflow on Earth and Mars driven by a corotating interaction region Wei
http://onlinelibrary.wiley.com/doi/10.1029/2011JA017340/full
Increasing exposure of geosynchronous orbit in solar wind due to decay of Earth’s dipole field zhong
http://onlinelibrary.wiley.com/doi/10.1002/2014JA020549/abstract
Before I forget, consider the fact that as of 2014 the Holocene is roughly 11,750 years old
Timing, is everything.
Fuller (Fuller, M., Geomagnetic field intensity, excursions, reversals and the 41,000-yr obliquity signal, Earth Planet. Sci. Lett. 245 (2006) 605–615
Testing the relationship between timing of geomagnetic reversals/excursions and phase of orbital cycles using circular statistics and Monte Carlo simulations Xuan
obliquity signal, Earth Planet. Sci. Lett. 245 (2006) 605–615.) pointed out that, for 9 reversals over the last 3 Myr, reversal age has a non-random relationship to the phase of orbital obliquity.
(There are articles for and against Fuller out there, btw)
For extra points, guess what phase of orbital eccentricity we are in/ heading for?
Glacial Inception anyone?
Since Mccenny does it so well, brush up on the end of the Holocene
http://wattsupwiththat.com/2014/05/29/glacial-inception/
We have a lot of things coalescing roughly close in time. This is the ghost story of our children’s children, and this is After the other stuff. If we are also truly close to the end of the interglacial, I think we are so f$&@ked we can’t even take a bus, back to f$&@ked. Even if its by degrees of severity, its still gonna leave a huge mark.
The rough , and I mean rough estimate is two generations, + /- 30 years.
So, are we having fun yet, kids?
Posted by Stock at 3:58 PM