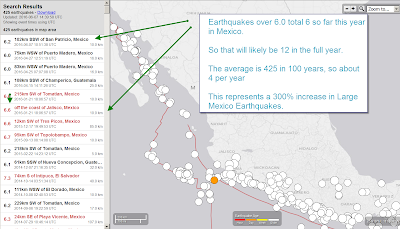 Earthquakes over 6.0 total 6 so far this year in Mexico.

So that will likely be 12 in the full year.

This represents a 300% increase in Large Mexico Earthquakes. 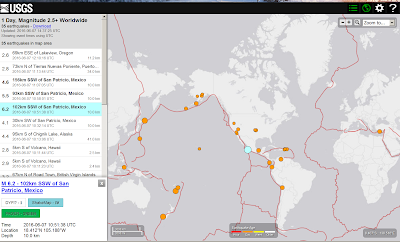 A huge magma chamber may slowly be growing beneath Matata town, southeast of Auckland in New Zealand, according to a new study performed by GNS Science. The discovery of a growing volcano may help to explain a recently observed swarm of earthquakes.  Good news is, the scientists don't expect the volcano to erupt anytime soon.

stock here: These asshat grant funded government mouthpieces can reassure the public that it won't erupt anytime soon, yet with their hundreds of millions in funded they can't even predict earthquakes, whilst unpaid Citizen Scientist can make pretty accurate earthquake predictions?

The discovery came as a big surprise to the scientists, AP reports, as no active volcanoes have been observed near Matata for al least 400 000 years. In the period between 2004 and 2011 the area experienced a quick uplift, and this event has probably induced the recently observed swarm of earthquakes.

I have called the "space soup" before, but I kind of like the "Chili" analogy better.

Now scientists say they may have discovered a 5th force.   We will see.   I think they have blinded themselves to a real truth by assuming that the 5th force must be comprised of a "force-carrier particle".      It may not be a particle at all.

It think when the "Chili" is really discovered, there will be thousands of physicists kicking themselves in the arse because "it was so obvious all along".

Four known fundamental forces of physics are gravity, electromagnetism, the strong and weak nuclear force. Because the standard model of particle physics seemed to be unable to explain the dark matter, a substance which, according to scientists, makes up over 80% of the Universe's mass, the scientists have begun to look for another fundamental force. Theoretical physicists have proposed a variety of exotic force-carrier particles so far, the so-called dark photons being one of them.

Some MSM is breaking away from the "Global Warming" aka Wealth Transfer Via CO2 Hoax
https://wattsupwiththat.com/2016/06/05/cnbc-breaks-with-the-climate-disaster-narrative-of-msm


Surprising Story Coming From CNBC says Paris Climate Accord is “irrelevant” and cuts would “impoverish the world”
Jack Simmons writes:
When I first started reading this story, I had to do a double take.