Radiation Pollution, Enabled By A False Dose Model, Is Causing a Cancer/Disease Epidemic

"…The governments of all countries have been regulating the emissions from nuclear sites and the exposures of humans on the basis of a FALSE RISK MODEL === A false relationship between exposure to radiation and the health effects that they produce. And this risk model, which was developed in 1952 in order to underpin the development of nuclear weapons, has been broadly unchanged since 1952. 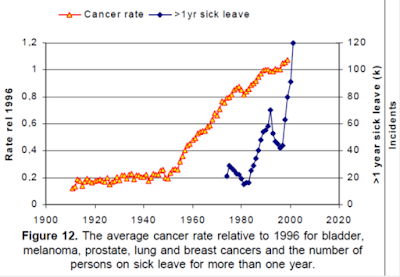 It's held by a group of people called the International Commission on Radiological Protection…. The Scientific Secretary of this organization met with me here in Stockholm in April of last year and at least conceded in a debate that we had, which was videoed, that the risk model is indeed false. It cannot be used for predicting or explaining the health effects of exposures to substances like Strontium90, and Cesium137, and Plutonium and so forth ….

This is the biggest public health scandal in recorded human history. People have been systematically contaminated and poisoned by these substances since … global weapons testing… the nuclear fallout from atomic bombs…and it is this exposure …that is essentially the cause of the current cancer epidemic.”

From the link immediately above:


The dirty secret about internal emitters

The aforementioned stakeholders in keeping us ignorant about the risks of radiologically contaminated food know full well that alpha radiation is the elephant in the room, the sword of Damocles hanging over the head of everyone who eats.


Obesity is linked to cancer in reality because people who eat more, ingest more internal radiation emitters, including the very dangerous alpha emitters. The more you eat, the more alpha emitters end up in your blood stream and in your cells, and the greater the risk of a double DNA strand breakage that can’t be repaired and turns into cancer because the cell does not commit suicide, neither stops dividing and the immune system is not in the full 100% of cases able to kill the tumor before it’s larger than a grain of sand or at most a grain of rice.

When you’re older, these mechanisms become less efficient and will eventually fail. Alpha exposure from an internal emitter will then inevitably result in cancer. Public information on alpha emitters obfuscates the issue. Alpha radiation is portrayed as the lowest risk of all, in pictures that show that alpha particles can’t even penetrate the skin. It is as if they want to make them appear harmless.