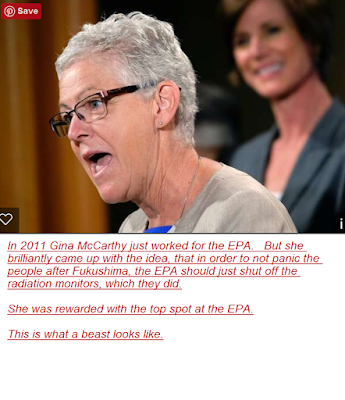 Apparently the 50,000 messages Food & Water Watch supporters sent back in March wasn't enough to keep the EPA from caving in to nuclear industry pressure. Now, the EPA is moving forward with a guidance


to increase the amount of radiation allowed in your drinking water.

It's not just a slight increase they're proposing. We're talking the equivalent of 250 chest x-rays a year!

The EPA quietly dropped the news on this so-called "protective action guidance" earlier this week, hoping we'd miss it. Not a chance. We've only got a short window of opportunity to make a big impact. Send a message to President Obama and the EPA — do NOT increase limits on radiation allowed in my drinking water.

I had this to say

I have a Masters Degree in Material Science from the U of Michigan. My education includes 5 years of study and research in radiation and heavy metals.

I am surprised and even shocked that an agency (that we pay your salaries, remember) created to protect the people, is proposing a standard that is effectively allowing an equivalent to 250 chest xrays a year.
This is shameful for a modern and so called civilized society to allow the people who pay your salary to protect them, to be exposed to these massive levels of radiation. Of course, internal radiation is far far worse than external radiation.

I also protest the "weasel words" of calling this "non regulatory guidance". Those civic leaders who have no where near the education and experience that I have, cannot possibly take this "guidance" if passed, as anything other than a directive.

The EPA needs to fight back against the corporate and nuclear cartel that is pulling the strings to loosen up the rules so this top heavy and archaic "science" that we call Civilian nuclear power, can have a chance at existing. Start representing us, again, and stop the puppet like response to the $1.4 Billion per year that the nuclear cartel spends to promote themselves and influence the EPA. Make us proud! Don't kill us. Don't pre-plan and allow more tolerance for a nuclear disaster at our aging nuclear plants that are averaging 2 emergency shutdowns per week.

Thank you, very much. Be real men and women, don't be a weasel.

By: Public Employees for Environmental Responsibility (PEER)
The PAGs have been expanded to cover not just large accidents but any release of radioactivity for which a protective action may be considered. They cover the “intermediate phase” after “releases have been brought under control” – an unspecified period that may last for years. …

The new guidance would permit radiation exposures equivalent to 250 chest X-rays a year and, for some radionuclides, a person could receive a lifetime dosage from a small glass of water.
Despite public consternation about the plan, EPA has employed troubling hide-the-ball ploys, such as –
• Although it would set new concentrations for 110 radionuclides, EPA has not disclosed what those new concentrations would be for all but three of these. Yet, internal EPA documents obtained by PEER claim that proposed concentrations "would exceed MCLs [Maximum Contaminant Limits of the Safe Drinking Water Act] by a factor of 100, 1000, and in two instances, 7 million."
• EPA removed from the electronic portal for comments (regulations.gov) the boxes for commenters to include their names, an extraordinary move that reduces specific public input from a range of experts, cities and even states as coming from "anonymous" sources; and
• Taking the unexplained step of requiring all documents submitted to be in full (no urls) but imposing a limit of ten megabytes per attachment.
"This is a very creepy plan rolled out in an especially creepy fashion," stated PEER Executive Director Jeff Ruch, noting that because the public comments are concluded EPA can put the plan into effect at any time. "It is unconscionable that full impacts of suspending drinking water safeguards during long periods of nuclear fallout are hidden from the public." … 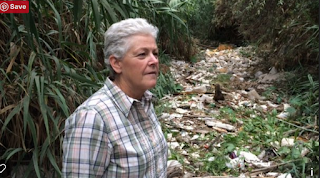 From jebus at ENENEWS

Time for an overhaul. Ridiculous. You are not my representative, nor my environment or childrens.
You obviously represent the struggling, bankrupt, careless and planet poisoning nuclear industry.
That you would ever even propose such toxic nonsense in drinking water, no matter the circumstance, is very telling of who you work for.

Shame on you…and shame on Americans for letting things go this far.

Am I an angry citizen? Of course I am! You're so far in- you can't see out!

Your job is to protect the environment and children, not propose more of the most toxic substances known to man in their DRINKING water.

You have taken the responsibility of protecting our water and turned it into a green light for the nuclear industry to "spill" unprecedented amounts of their radioactive poisons into our drinking water- for our babies??

July 25, 2016 at 1:07 pm · Reply
RE: Proposed Change in EPA PAG Guidelines for radiological contamination of water
Please make your comment at the link here no later than today,
July 25, 2016

RE: EPA proposal to change PAG's for allowable radiological contamination in water during a radiological accident
July 25, 2016

Changing the PAG's for radiological content during a nuclear accident will NOT protect the public. It is completely antithetical to logic to increase allowable amounts of radiological contamination in water, and state this is part of a "protective action."
It would appear the nuclear power industry has once again persuaded the EPA to set aside its stated goals of protecting public health, and instead is adopting PAG's which would favor the nuclear industry.
By raising PAG's for water and "alert levels" for radiological contamination of air, the EPA gives at least the appearance of abandoning public safety concerns.

Some were put to death.   It didn't matter that they were "just following orders".    It doesn't matter that you all are captured by the nuclear/industrial industries even if you don't know it.    Social unrest is very high and we are at a tipping point (potentially) in which you may find an extreme backlash against government scientists who did not protect those who paid their salaries.

It is time to step back, look at the big picture.  Nearly all of us are sick in some way, or the Big C Cancer.

Do your jobs.   Turn on all the Beta and Gamma radiation stations in the USA.   Fix them if need be.   Data transmission via cell or WIFI is simplistic, that was used as an excuse for why some weren't worth operating.

We are watching your actions. 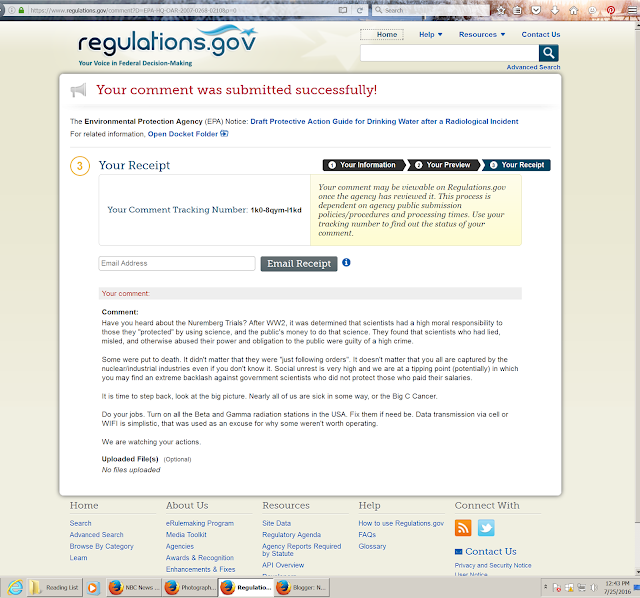