"A team of researchers", suddenly change their tune, after the "experts" had considered the Volcano extinct. 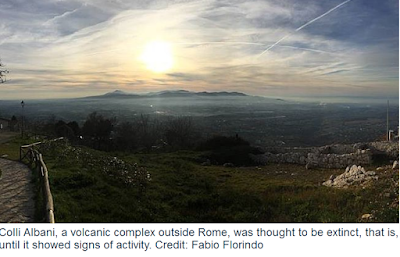 A team of researchers, led by volcanologist Fabrizio Marra of the National Institute of the most recent of which occurred 36,000 years ago
Geophysics and Volcanology in Rome, used ground-based observations of rising land, earthquake swarms and steam vents alongside satellite data to track Colli Albani's recent activity. An analysis of rocks from the volcano revealed a history of past eruptions,

Now, researchers have reported in the journal Geophysical Research Letters that Colli Albani just doesn't erupt that often. In fact, it enters an eruptive phase every 31,000 years or so.

A volcano outside Rome, long thought extinct, is rumbling to life. But don't panic: The volcano isn't likely to blow its top for at least another 1,000 years.

But "don't worry" even though overdue, it won't happen for 1000 years. 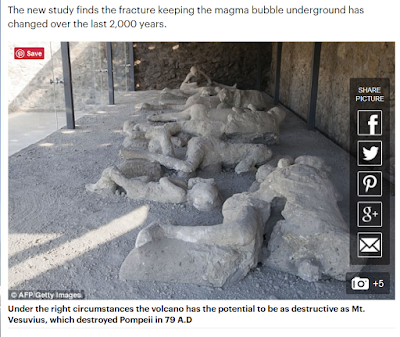 see below from another article.    Here is the new scientist game plan:

1) Minimize any immediate threat so the people don't panic, so economic activity is not disrupted
2) Get more grant money to "monitor" even though speaking out of the other side of their mouth...."it won't happen for at least 1000 years".

Yet the experts are piss poor at predicting even simple, very predictable earthquake risk timeframes.

Although a massive eruption of Colli Albani is not likely for another millennium, Marra said he hopes the new research is a wake-up call for closer monitoring of the volcano.