USA Nuclear Is Dying, Another 4 Nuke Plants Bite The Dust

Whatever it takes, whatever method or reason, closing nuclear plants is a huge win for the humans, animals, plants or the world. 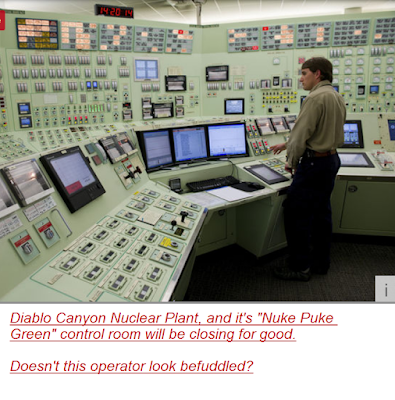 And now even though they had a license extension and long term lease renewed, Diablo Canyon is
going to close 2 plants, and replace it with

PERFECT!   and listed in the "right order" also.    Diablo Canyon is about 9% of California's Electricity, so that is a big deal.

After years of debate over its future, Diablo Canyon is succumbing to the fate of many nuclear plants in organized markets.
With low gas prices and stagnant load growth keeping market prices down, nuclear plants, with their relatively high fixed costs, are finding it difficult to compete. Five reactors were shut down in 2013 and 2014, the Post notes, while Exelon just announced plans to shutter two major plants after efforts to win legislative support in Illinois failed.
“Our analysis continues to show that instead of continuing to run all the time, there will be parts of the year where Diablo will not be needed,” PG&E CEO Tony Earley, said Tuesday, according to SF Gate.

And Exelon is shutting down 2 plants, there.    Huuwah! 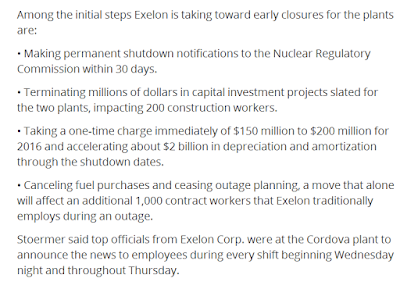 This describes the run up to the decision
http://www.utilitydive.com/news/updated-exelon-says-2-nuke-plants-on-the-line-in-sweeping-new-illinois-ene/418730/

And this is the decision

And a citizen journalist does some nice research to prove that a PUC official was biased against solar even while currently reviewing policy on solar.   That PUC official got her ass canned.

Voltz said he made the connection via a Google search of a Twitter account and connecting the picture on the account to Tanner’s Facebook page.
“A review of these comments shows that Ms. Tanner was disparaging the rooftop solar companies, the net metering customers and the Bureau of Consumer Protection, while at the same time praising NV Energy, when the Commission still had this matter pending before it,” Voltz told the commissioners in the public testimony portion of the Wednesday meeting.
He provided a link to the comments.
The Twitter account appears to have been closed.
Voltz said Tanner appeared to have violated the rules of Judicial Conduct which prohibit a judge or court staff from making comments that impair the fairness of a matter pending before it. The rules apply because the PUC is a quasi-judicial agency.
The PUC had no comment and would not even say if Tanner had left the agency. But she is no longer listed as staff member on the PUC website.