323 Reindeer Dead In Norway -- It's a Special Anthrax, But The Experts Tell Us It's Lightning


Many reindeer are shown with their heads completely missing, this one has its antlers on the carcass.   The article does not discuss that at all.    There are no heads laying around, they weren't blown off by the lightning strike, they were removed by humans who left the antlers because they had to carry the heads in a helicopter.   Why would they do this?   The answer is below, but read on.

Finally, I will tie all this in with the nuclear accident at Chernobyl, and the Fukushima debacle, via Chitin and weakened immune systems. 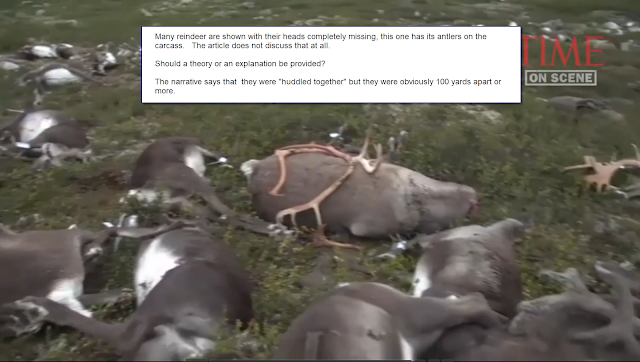 Should a theory or an explanation be provided for this implausible lightning strike?   Yes, I have one below.

The narrative says that  they were "huddled together" and all 323 were hit by lightning.   But they were obviously 100 yards apart or more.

None of the animals showed any signs of being charred

As BNO News notes, the deadliest lightning strike involving livestock occurred in 2005, when 68 cows were killed in Australia, according to the Guinness Book of World Records

Reindeer and known to be affected by Anthrax, the same type that can kill humans.    Normally they just let "nature takes it's course" when they find dead animals, but in this case they are discussing further actions.   Indeed if Anthrax killed these reindeer, they would want to bury them, or burn them.

But this is crazy right?    Is there any evidence that Anthrax could be popping up in the artic?   Yes!


A 12 year old boy has died and a further 90 people are in hospital following an outbreak of ‘zombie Anthrax’ on the Yamal Peninsula, northern Siberia. Abnormally warm temperatures are the likely cause, allowing dormant spores to reawaken in either human or reindeer corpses as they thaw.

The Siberian Times reports that 20 cases have been confirmed as Anthrax. Two thirds are reported as having the skin form of the disease, which is more easily treated. The others, however, have contracted the more complicated and deadly intestinal form of the disease, from which one boy has died.

Caused by the bacterium Bacillus anthracis, Anthrax can occur in one of four forms: skin, inhalation, intestinal or injection. Typically affecting sheep and cattle, the spores of the bacteria are normally spread by infected animal products and cannot be transmitted person to person. The destructive disease is also known as “Siberian plague” in Russia and hasn’t been seen in the region since 1941.

While bio-warfare troops rush to incinerate the reindeer carcasses at high temperature, the other herders in the vicinity are being evacuated to ‘life sustenance camps’ near Salekhard, the regional capital. Any potentially infected meat must be eliminated to prevent the spread of the disease. The local government have completely banned the export of any meat, skins or antlers from the region in an effort to avoid poachers spreading the disease on the black market.

Now why would they remove the heads?   Kind of extreme, right?   When they said they removed the heads in order to see "whether it was one lighting strike or two" my bullshit detector went off, my spidey sense.


The Merck Veterinary Manual States that for an anthrax diagnosis:


For carcasses dead >3 days, either the nasal turbinates should be swabbed or turbinate samples removed. Pigs with localized disease are rarely bacteremic, so a small piece of affected lymphatic tissue that has been collected aseptically should be submitted. Before submission, the receiving reference laboratory should be contacted regarding appropriate specimen labelling, handling, and shipping procedures.


This same type of mass die off occurred before, and it was a bacteria

This occurred also in 1988, the end of the last big el-nino and the beginning of the "pause" in global temperatures.    And here is the clincher, the death knell for the nuclear industry.      It was 2 years after Chernobyl.    And during a "hot spell".

Just like now, now 5 years after Fukushima and at the tail end of a hot spell.    So either some ancient and really deadly bacteria melt out of the tundra, or normal bacteria just had a population spike due to less winter die off, or we had a radiation induced mutation in the bacteria turning them into Super Bugs.

Pasteurella is found normally in the bodies of ruminants like the saigas, and it usually doesn't cause harm unless the animals have weakened immune systems.

What weakens immune systems?   Radiation.   These mass die offs happened after Chernobyl and After Fukushima.   They have not happened in the southern hemisphere, where there is little nuclear.   How does radiation weaken immune systems?

Do you know what Saiga and Reindeer have in common?   They both love Lichens.     Why is that a big deal?    Because Lichens are one of the largest bio-magnifiers of radiation in the environment.

Lichens are comprised of Chitin, a special biological structure which I did some prior study on which is very interesting, find it here:  http://nukeprofessional.blogspot.com/2016/02/a-scientific-basis-for-destruction-of.html

What else does good gut flora (and thus good immune system) require?

Some gut flora is greatly benefited by the presence of Oligosaccharides in the gut.

OK for those that follow me, this is now going to knock your socks off.

What is the best source of Oligosaccharides?

And Chitin absorbs radiation like a sponge and bioconcentrates it.

So the thing that we need desperately for gut health is destroyed by radiation.

That article is here: 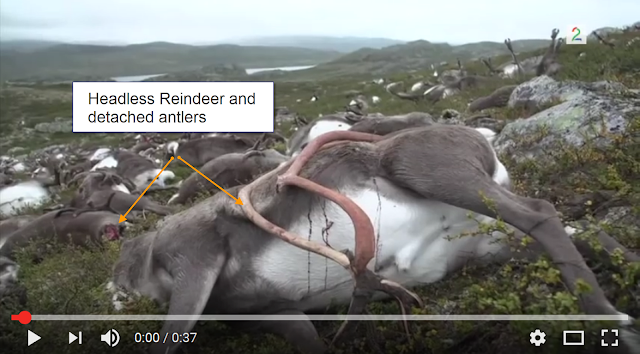