Do Water Dams Create Earthquakes? It Appears So. 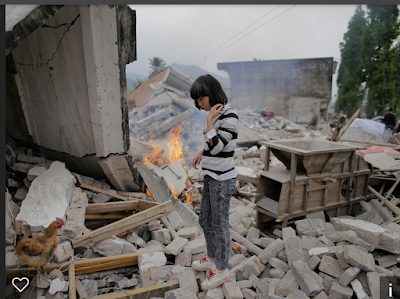 I am a large believer in hydroelectric power.    I think we need to do more of it, even at the expense of some frogs and such.

However, is there a larger price to be paid for some of these dams?

Abstract Two  and  a half years  prior  to China’s  M7.9 Wenchuan earthquake of May
2008, at least  300 million  metric  tons  of water  accumulated with  additional seasonal water  level changes  in the Minjiang  River Valley at the eastern margin  of the Longmen Shan.  This  article  shows that static surface  loading  in the  Zipingpu  water  reservoir  in- duced  Coulomb  failure  stresses  on the  nearby Beichuan thrust fault  system  at <17km depth. Triggering stresses  exceeded  levels of daily  lunar  and  solar tides  and  perturbed a  fault  area  measuring 416±96km2 .  These  stress  perturbations, in  turn, likely  ad- vanced  the clock of the mainshock and directed the initial  rupture propagation upward towards the  reservoir  on  the  ”Coulomb-like” Beichuan fault  with  rate-and-state  de- pendent frictional behavior. Static triggering perturbations  produced up  to  60 years (0.6%) of equivalent tectonic loading,  and show strong  correlations to the coseismic slip. Moreover,  correlations between  clock advancement and  coseismic slip, observed  during the  mainshock beneath the  reservoir, are  strongest for a longer  seismic  cycle (10kyr) of M>7 earthquakes. Finally, the  daily  event rate  of the  micro-seismicity (M≥ 0.5) correlates well with  the  static stress  perturbations, indicating destabilization.


et  al.  1995).  This  intra-continental region  has  been  extensively studied both  prior  to and  after  the  M7.9 earthquake in 2008, including  a) paleo-seismicity studies  (Burchfiel et  al.  1995; Densmore  et  al.  2007; Zhang  et  al.  2009; Zhou  et  al.  2007; Burchfiel  et al.  1995; Chen  et  al.  1994),  b)  instrumental  recordings of the  seismicity  prior  to  and after  the  mainshock (1970-2009)  (Hu  2007; Lei et al. 2008), c) inversion  data analyses of teleseismic  body  waves of the  mainshock (Wang et al. 2008a; Zhang  et al. 2009), d) studies  on coseismic ground  deformations (Lin et al. 2008; Zhang  et al. 2009). Finally, the  trigger  mechanism of the  2008 M7.9 Wenchuan earthquake has been debated since the earthquake’s occurrence (Klose 2008; Lei et al. 2008). Some studies  suggest  that the mainshock might have been triggered by pore pressure  diffusion within  the earth’s  crust resulting from  a nearby artificial lake,  the  Zipingpu  water  reservoir  (Lei  et  al.  2008; Ge et al. 2009). Other studies  reject  the  hypothesis of triggering due to pore  pressure diffusion  (Deng  et al. 2010; Gahalaut and  Gahalaut 2010). It  can  be anticipated that the earthquake cycle was already in its late stage in 2005 and close to failure conditions, because  the Wenchuan earthquake ruptured in 2008. But,  did the surface loading  affect the  earthquake cycle and  the  initial  rupture? How many  years  of equivalent tectonic loading  would the  artificial loading  advance the  clock of the  mainshock and  how much of the  coseismic  slip would  it produce?
This study shows that observations and data modeling support the initial  argument that lithostatic stress  changes  and  the  poroelastic response  of the  earth’s  crust  due to the  weight of the  Zipingpu  reservoir  on the  earth’s  crust  most  likely triggered the  2008
M7.9 Wenchuan earthquake (Klose 2008). The article  provides  further evidence  that a) surface  loading  due  to water  mass  accumulations within  the  Zipingpu  water  reservoir in the  Minjiang  River  Valley  between  2005 and  2008 induced  Coulomb  failure  stress changes  in the earth’s  crust  and b) triggering stress perturbations beneath the artificial lake likely advanced the  clock of the  Wenchuan earthquake, while affecting  the  initial rupture propagation. Furthermore, the  water  reservoir  impounding generated static triggering stress  perturbations in the  earth’s  crust  beginning in 2005 that biased  daily stress  alterations due  to  tidal  elongations of the  moon  and  the  sun.  Furthermore, it could  have  changed  the  natural earthquake cycle and  advanced the  clock of the  2008
Wenchuan earthquake by several  decades.
Posted by Stock at 5:31 AM