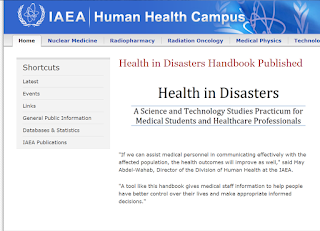 "If we can assist medical personnel in communicating effectively with the affected population......"

Ah, now the pimps for International Radiation are guiding Doctors on who to sell propaganda to their patients and society overall.

Incredibly they give primary thanks to the famous Dr Yamashita, the asshat criminal lying "Doctor" who told people on video that if they smiled that Fukushima could not hurt them.

Then as they shift into a mode of downplaying radiation by presenting and promoting the "Hormesis Theory" that radiation is actually good for you.

But amazingly, on page 40, they present this quote from Ann Coulter, AND THEY FAIL TO RECOGNIZE that this is a prime example of why people do not trust the media and the lying Doctors like Yamashita....because when people perceive obvious lies being thrown at them, they look at any "communication" with suspicion.

They continue on with the promotion of hormesis, somewhat presenting "both sides" but they control the narrative by a false argument of limited choices.    One must either be a true believer of hormesis, OR one must be a LNT follower (Linear No Threshold).     Read it on Page 34.

Then amazingly they actually write this as a Conclusion---P 36

This has been illuminated by the cultural and historical discourse of radiation health effects, which have affected and continue to affect the alleged objectivity of scientific definitions of disease and illness. Care must be taken to avoid medicalization of conditions in defining contested diseases because of possible inadvertent implications in social and medical policy. At the same time the leveling or trivialization of potential health risks from radiation for the sake of political or public interests should be avoided in the interest of potentially affected individuals.

What they are attempting to persuade with is "because radiation has been looked at poorly in the past, therefore you Doctors need to question your own objectivity, especially as it relates to "medicalization".     Amazingly the IAEA coins there own term Medicalization, and then goes on to define that as "over diagnosing illness".     They pretend that some sicknesses are "just the way it is" and you should just accept it as that, and not lump it against radiation. 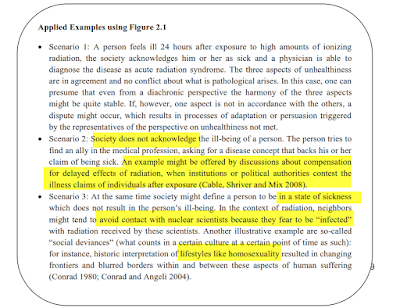 Seriously, that is their tactic---pretend that sickness and disease, IS NOT sickness and disease.
Then they throw out these insanely offbase examples, with the first example pretending that only "acute radiation syndrome" can be called a "disease".   The absurdity of it all.   Just read these and shake your head.  P29 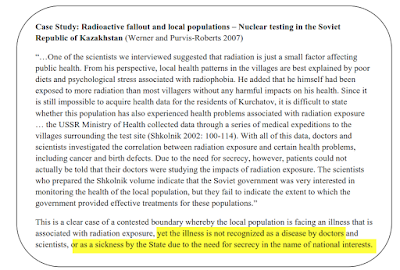 This "breakout" on P32 seems to be trying to brainwash Doctors to the idea that if something is not recognized as a disease, that is OK, especially if that is in the "national interest" 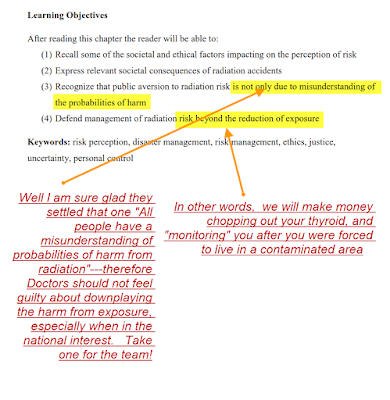 On page 42, they layout their plan for the propaganda quite clearly 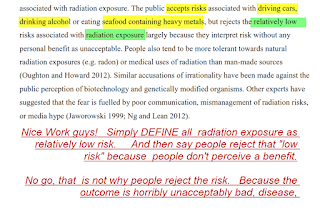 Radiation risks represent a class of environmental risks over which people feel a particular lack of control (Slovic 1996), and particularly those associated with exposures following accidents. The public is dependent on information from authorities or media, and has little personal choice or control over the situation. The public has to deal with the risks from the exposure and in addition they must cope with the effects of the measures imposed to reduce exposure such as relocation, bans on agriculture or access to amenities. The latter represent
decisions taken at central level. They are disruptive and infringe upon liberty and free choice.

But the lies and propaganda just keep rolling, review this from P49 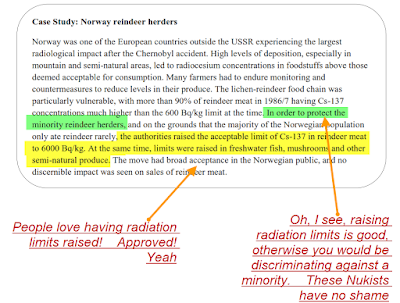 Then on P53 they get into "genetic testing",  how convenient, even if the cancer was caused by radiation, they can blame it firstly on genetics and "bad luck".   Please read it yourself.

Then on Page 55 they have an Exercise.    It seems like a fun game in which you have total control in decided who stays in a fallout shelter after a nuclear war, and who gets forced out into the radiation.    What lesson do you think the IAEA is trying to push?   That forcing people into radiation is normal and necessary.     Read it.