Lemons - A Panacea To Alkalize the Body and Prevent Cancer, Or An Urban Myth

For 6 months I have "religiously" as part of a new morning ritual done this:

Wake up, and even before coffee 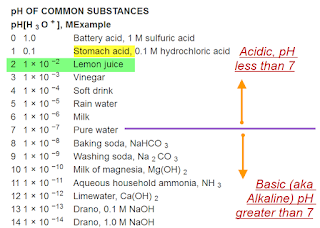 1) Mix 2 glasses, Lemon Juice concentrate from the Frig, about an ounce each, with RO water.

2) Put 2 tablespoons Apple Cider Vinegar in a LARGE spoon, and then slam that down with an IMMEDIATE lemon water chaser.   2 points here, The ACV needs to have "the mother" I mean, still active bacteria, and ACV can burn your throat over time so the quick chaser will help prevent that.

3) 2 tablespoons Honey
Then I drink the remaining lemon water just naturally in the morning.

The 2 Dimensional View on the Internet is simply than Lemon juice is a "great clean alkalizer of the body with all the spin off health effects".     But look at the chart above that I have annotated.   Lemon juice is quite the strong acid, how can it alkalize the body (opposite of acid).

I am going to be using more of the 2D, 3D, and even 4D descriptions in the future, after seeing it used effectively on a review of the Sandy Hook training exercise.

The general "tilt" of the 3D view on the net is that Lemon juice is acid, but (magically and without explanation) it becomes alkaline "within the body".   Some go on to say.....because of the other minerals within the lemon juice...it becomes alkaline.   But there are never any pH levels cited, never any chemistry equation to show what and why. 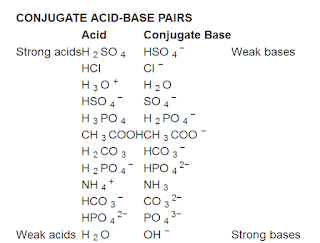 
This article touts Lemon and Baking Soda Combination as a Cancer Killer, indicating studies, but not naming or linking those studies.   Again, thats just 2D and very disappointing.


Somewhat off topic, but a real discussion of sorts....seen on one website-- LOL found the referenced article....$40.00 for 48 hours of access.   Yeah right.


What I would like to add from a more microbial perspective is that a paper by Yoshiake Miyake on the Metabolism of Antioxidant in Lemon Fruit (Citrus limon BURM. f.) by Human Intestinal Bacteria (1997) has shown that Lemon fruit can be an important antioxidant. Antioxidants are known in clinical medicine to be inhibitors of acidosis and is why we recommend blueberries and such to take care of those nasty free radicals and ROS species. What this article suggests though is that they only tested Bacteroides.

These little microbes are responsible for some of the breakdown of indigestable plant material, possibly lemons, that occurs within our gut. Recently I read an article, "Impact of diet in shaping gut microbiota revealed by a comparative study in children from Europe and rural Africa", which sequenced the fecal microbiota of 14 children from Africa and 15 Children from the EU to understand if there is an association between diet and gut flora regionally. Although it was a small sample size, it showed that overwhelmingly children from Africa had a significantly higher proportion of Bacteroidetes while also having a higher bacterial gut diversity overall.

Children from the EU had a large proportion of Firmiculates because Western diets have the need for Firmiculates to breakdown highly processed foods, sugars, and animal fats.

What if it is at the detriment to our balance of gut microbes? Could the lack of complete breakdown and neutralization of acidic fruits such as lemons along with production of acid through protein breakdown be a common cause for the massive increase in non-infectious enteric diseases in the western world?

Just the thoughts of a lowly molecular researcher.

August 21, 2016 at 6:18 pm Log in to Reply
stock. Acid-alkaline is almost too complicated to be practical. No simple understanding suffices. The best is to resort to natures method; fresh and raw foods with lots of herbs, a healthy lifestyle.

Lemons are acidic but so is the stomach. Acids in the stomach helping to digest food, ionize minerals, release bicarb into the system will all affect PH balances. Breathing out C02 (tax it!) and retaining bicarbonate by the kidneys are the way we naturally keep ph in its narrow limits.