This letter from a colleage

Hello Lori,
A colleague asked me to review Talk of Alaska's latest episode. I listened to the tape and was not surprised that 'Art' in Wasilla brought up the phenomenon of persistent and spreading contrails. As an aside, please use the scientific term, solar radiation management, or atmospheric geo-engineering, rather than the misnomer 'chemtrails'. Solar radiation management is a topic of international conferences and accorded respectability by a number of PhD atmosphere researchers. See here:

Note that DK suggests that SRM is an option for the future. Bullshit, he's plowing the ground to soften the lay public's realization that it is already well underway.

The denial issued by your guest, Mr. Bretschneider, is an affront to anyone with eyesight. The caller's allegations are correct. Your guest's response demonstrates he is either dumb as a brick or a disinformation agent. I've read the report he referenced; it does not comport with witness accounts and other data. I expected you to confront him with details of your own investigation. My expectation was premature; your journalism needs to expand before that happens.

BTW, we know know that the CIA coined the term 'conspiracy theory' in the mid-60s to counter criticism of the Warren Commission. It is now widely used to divert and diminish attention to vital public concerns. Please research my assertion and adjust your responses to people who counter arguments by throwing out conspiracy theory claims.

A resource about SRM you may find useful:

Bear in mind that the Deep State has had access to billions of dollars in black budget funds over the last 70 years. These funds have nurtured secret projects and scientific breakthroughs outside the ken of most Americans. Yet if a journalist digs into the literature, evidence for the narrative I present can be uncovered.

I also direct your attention to Dane Wigington's site: geoengineeringwatch.org. Journalists the world over are using it as resource to better understand the phenomenon.

Finally, as you were presenting Talk of Alaska live, these photos were made of the sky north of Black Rapids on the Richardson Highway. The activity coincided with your broadcast. 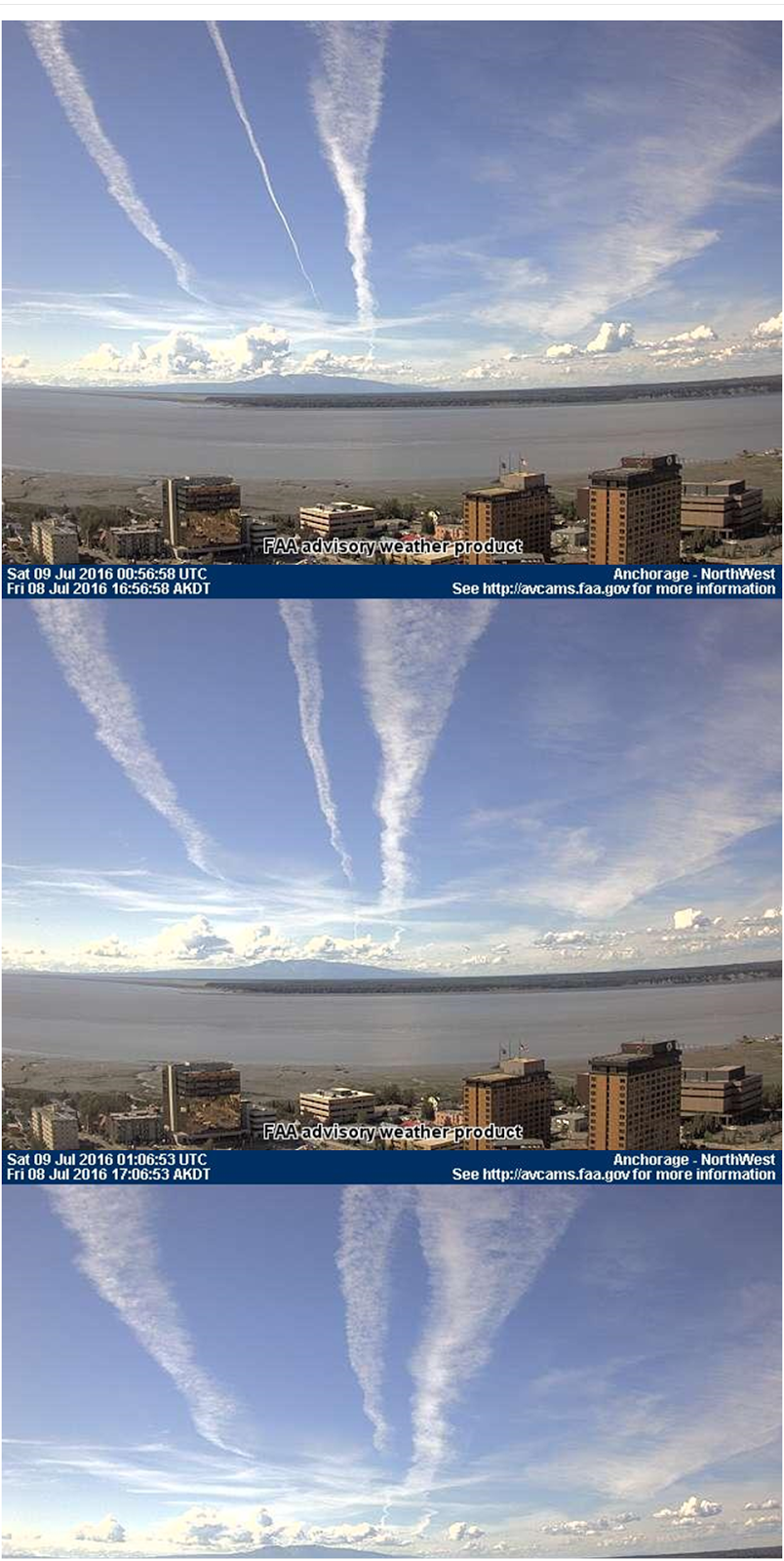 And here's images from Anchorage in early July. Similar evidence is available showing spraying from Ketchikan to Barrow, Gambell to Eagle.

Don't let TPTB corrupt your journalism. The caller who featured his concerns about SRM needs to be taken seriously. Our skies are being occluded with man-made aerosols. Your guest tells the audience to ignore their eyes and to ignore decreases in solar panel output. In light of the material I'm sharing with you, it's clear Mr. Bretschneider was lying or is deeply conflicted or both. How do you intend to set the record straight?

Chem trails. Old news. A 300 page paper was produced out of DELFT university back in 2010
At an international symposium at Delft University of Technology in Ghent, 29 May 2010, the Belfort Group enlisted Dr Coen Vermeeren, a senior aeronautics engineer, to address the issue. Vermeeren based his presentation on a 300 page scientific report entitled “Case Orange: Contrail Science, Its Impact on Climate and Weather Manipulation Programs Conducted by the United States and Its Allies.” According to Vermeeren, the authors of the report are “a group of scientists/inside who have chosen to remain anonymous.” The Case Orange report reveals the existence of publicly available material indicating that various forms of geoengineering have been going on for “at least 60 years.”
http://www.i-sis.org.uk/atmosphericGeoengineering.php
Chem trails are also what they look like; transmission lines. They work by 'distributed capacitance'
Posted by Stock at 6:52 PM