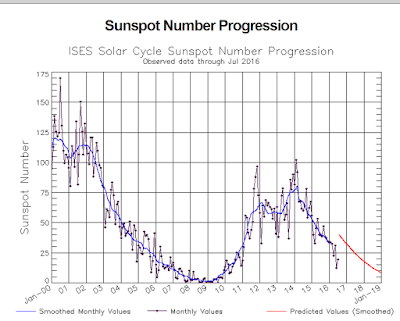 Mankind in it's incredible hubris, cannot bring himself to believe that things outside our world can actually influence us.     Man can convince himself that us all important humans are "forcing" the climate.

Its really fairly disgusting to view this hubris and watch it/live in real time.

To the right is real sunspot data from NOAA

Kirkby hopes that the experiment will eventually answer the cosmic-ray question. In the coming years, he says, his group is planning experiments with larger particles in the chamber, and they hope eventually to generate artificial clouds for study. "There is a series of measurements that we will have to do that will take at least five years," he says. "But at the end of it, we want to settle it one way or the other."

stock here---funny they need 5 years of grant money.   They could much more easily take a look at historical sunspot numbers, and compare them with cooling periods.

They could also correlate cloud cover over the world using satellite data for cloud cover.

2011 -- WELCOME TO THE RISE OF SUNSPOT CYCLE NUMBER 24...
Revolutions start where there's most oppression - so Arabs  are busy revolting
... and the cycle is just getting going. This should be quite a "revolutionary wave."

Well, the status quo doesn't recognize the facts. Most of what I looked at on that site were climate charts or proxies. There is overwhelming evidence for a naturally variable climate "system" but the status quo, the 38% of the population, a near majority who dominate the school systems (65-70 percent of teachers belong to this subgroup) just can not see facts for what they are. The letter that comes from the head of their organization has much more sway than the evidence. It sickens me but that is the reality. Humans are so God centered naturally that they refuse to believe other types exist and especially abhor the thoughts that they are in one of these groups.

Yes, grant money drives all of the current research. I have looked at newer climate books and they don't even talk about ice age anymore. I'm not kidding. The stuff that used to fascinate early climatologists doesn't even exist any more, not just because they are inconvenient truths but because they have been systematically eliminated over the last fifty years, which is two full generations. The AlGore people are real and fully believe what they say. They are biased towards this incorrect viewpoint and no amount of facts can change that.

It is not just simple corruption. The problem runs much deeper. It is an illogical species, which everyone can see and admit as long as you are talking about the "others". This 38℅ stuff is good science and probably explains the starting points for the political parties. I have always guessed 40 percent are born lefties or righties. The small movable middle are the ones who matter.

It fucking kills me to read (from academia) how my kind of brain is "mind blind" and can't recognize other types of thinking when that blindness seems to me to be the core human condition. Everything is always upside down and backwards and that is normal.

Most people have natural groupings that fall into the 38 percent typing, there are two of these, and two smaller 12 percent groups (basic Jung stuff - and his work is the basis for most testing today). People are able to find their own natural groups, think Susan and her teachers or Chong and his ignorant gun nuts. This creates an illusion of correctness.

The massive fail in logic is that these groups really do think the others are illogical if not totally wrong and even insane. Each thinks this of the other side, hence the awful political environment that will not talk to the other side civilly or productively.

My logic is clear - there can be no way that 40  percent of a population can be insane (illogical). It must be all of them. The 40/40 balance keeps us safe, when it tips too far we will have big problems. 60/40 may be too much to keep the system stable.