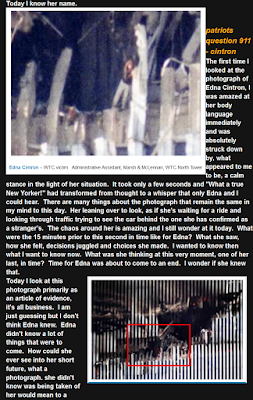 I never spent much time on the 9-11 Debacle.   But the more you look  the curiouser it gets.

AFter reviewing a number of videos, from a number of angles, there is no doubt that 2 airplanes flew into the towers.  But were the buildings also blown up in a controlled demolition, to get rid of pesky problems like asbestos and lead, and justify a decade or two of war?

The fire were supposedly so hot that they melted (or at least phase changed) steel that was protected by insulation to prevent just that from happening, yet a lady can stand in the open hole that the plane went into?   Edna Cinton is her name.

Down at the bottom we try to establish any basis for the claim of molten steel in the foundation basement even weeks later.    There is some basis, but no pictures, that is odd.

Like this short video which is a guy filming a firefighter in "full battle gear" just standing in the road, and then he pans to WTC1 and films the airplane impacting.

1-20-17 on the inauguration of Trump, I remembered this one....The BBC reporting on the WTC 7 collapse, even as that building stands in the background.


Clear video of second airplane coming in. Loud Rumbling felt just before the first airplane hit the WTC here is the 2nd Airplane going into WTC, a compilation of 43 angles.

52 clips of WTC South coming down

At 2:06 you can see this large horizontal block of something. What is it? The "roof" would not be that big or heavy.    Around 8:00 is also a unique view showing the upper portion of the building "sliding" in towards the center of the building, after which all hell breaks loose. 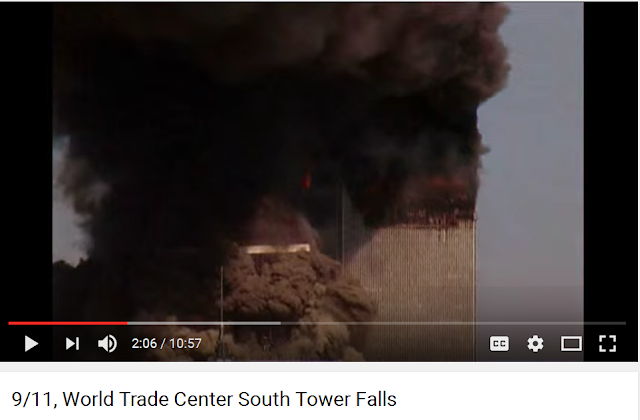 stock here                  Was there molten steel, "rivers of molten steel" in the foundation, even weeks afterwards?   This claim has floated around, but I have been unable to substantiate it.   I haven't checked every link below, someone with time could, and report back.

But I don't see any pictures that have any credibility on what they are and where they are, which is odd.   I wonder if they had a "company policy" of No Pictures?    That would be curious.   A Bing image search revealed nothing credible.

"7a. How could the steel have melted if the fires in the WTC towers weren’t hot enough to do so?

"Les Robertson [ingegnere strutturista del World Trade Center], in presentation at Stanford University, confirms that he saw a «river of molten steel» at the B1 level of the WTC debris pile"

According to Greg Fuchek, vice president of a company that supplied computer equipment used to identify human remains at Ground Zero: "Sometimes when a worker would pull a steel beam from the wreckage, the end of the beam would be dripping molten steel."

"Peter Tully, president of Tully Construction of Flushing, New York, told AFP that he saw pools of «literally molten steel» at the World Trade Center. Tully was contracted on September 11 to remove the debris from the site.

Loizeaux, who cleaned up the bombed Federal Building in Oklahoma City, arrived on the WTC site two days later and wrote the clean-up plan for the entire operation.

"I didn't personally see molten steel at the World Trade Center site. It was reported to me by contractors we had been working with. Molten steel was encountered primarily during excavation of debris around the South Tower when large hydraulic excavators were digging trenches 2 to 4 meters deep into the compacted/burning debris pile. There are both video tape and still photos of the molten steel being «dipped» out by the buckets of excavators. I'm not sure where you can get a copy."

"The fires got very intense down there and actually melted beams where it was molten steel that was being dug up."

Public health advisor Ron Burger, a veteran of disasters from the Mississipi floods to Mt. St. Helens who arrives at Ground Zero on September 12, said: "Feeling the heat, seeing the molten steel, the layers upon layers of ash, like lava, it reminded me of Mt. St. Helens [...]."

Alison Geyh, who heads a team of scientists studying the potential health effects of 9/11, reports: "Fires are still actively burning and the smoke is very intense. In some pockets now being uncovered, they are finding molten steel."

A review of of the documentary Collateral Damage in the New York Post describes firemen at Ground Zero recalling "heat so intense they encountered rivers of molten steel."

Unflinching Look Among the Ruins, NYPost.com, 3/3/04

"You'd get down below and you'd see molten steel, molten steel, running down the channel rails, like you're in a foundry, like lava."

"I saw melting of girders in [the] World Trade Center."

The thinning of the steel occurred by a high-temperture corrosion due to a combination of oxidation and sulfidation.

Heating of the steel into a hot corrosive environment approaching 1,000 °C (1,800 °F) results in the formation of a eutectic mixture of iron, oxygen, and sulfur that liquefied the steel.

The sulfidation attack of steel grain boundaries accelerated the corrosion and erosion of the steel.

The severe corrosion and subsequent erosion of Samples 1 and 2 are a very unusual event. No clear explanation for the source of the sulfur has been identified."(1)

"Perhaps the deepest mystery uncovered in the investigation involves extremely thin bits of steel collected from the trade towers and from 7 World Trade Center; a 47-story high rise that also collapsed for unknown reasons. The steel apparently melted away, but no fire in any of the buildings was believed to be hot enough to melt steel outright."

New York Times, 02/02/2002, James Glanz and Eric Lipton
"Jonathan Barnett, professor of fire protection engineering, has repeatedly reminded the public that steel - which has a melting point of 2,800 degrees Fahrenheit - may weaken and bend, but does not melt during an ordinary office fire. Yet metallurgical studies on WTC steel brought back to WPI reveal that a novel phenomenon - called a eutectic reaction - occurred at the surface, causing intergranular melting capable of turning a solid steel girder into Swiss cheese. [...] The New York Times called these findings «perhaps the deepest mystery uncovered in the investigation.» [...]. This Swiss cheese appearance shocked all of the fire-wise professors, who expected to see distortion and bending - but not holes."