Chalk River Nuclear Disaster --- They Covered Up, Parly Fessed Up, and Minimized With Lies About Benefits

The report pretends that there were no large releases, no public outcry, yet incredulously on page 6 they state 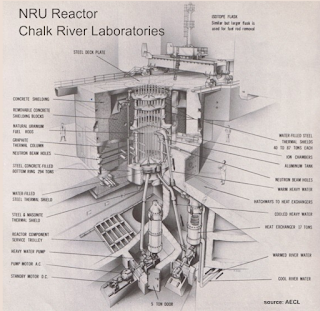 8000 to 30000 curies of fresh fission products discharged from the top of the stack.

*This single, large release has provided an extremely useful
source for long-term studies on the movement of fission products
through the ground.

stock here, they state that it was an airborne release, but that is provided a good study of movement through the ground.    Amazing, this was from 1952, lies and distortions out of the gate.

The air that passes through the reactor, between the water­
jacket around each fuel rod and the tube that forms part of the
moderator tank, is discharged from a 200-foot stack beside the
reactor building. Airborne activity was carried up this stack.
There was no monitor in the stack and if there had been one it
would almost certainly have gone off scale. The only measure
of the amount of activity emitted resulted from a fortunate
accident. An electrician was working near the top of a telephone
pole a few feet from this stack at the time of the power excursion
and his film badge read 350 mrem.

I wonder how that electricians thyroid thought about the Iodine 131 that he sucked in.   Sorry the film badge didn't measure that.

The day after the accident - Saturday - there were short
articles - a few column-inches - in the Ottawa, Toronto and other
papers with headings i" to i" high, and not· always on the front
page. They reported essentially what they were told by laboratory
management, and either they weren't told very much or they didn't
consider it very newsworthy. The reactor damage was described
as "a small hole, no bigger than a pin-point

A description that produced some merriment among those who had observed more than a
hundred gallons a minute coming through the "pin-hole".
In all the papers that I checked there was no suggestion of
any worry about the safety of the public. In the circumstances
this was indeed reasonable but in the climate of today it seems
abnormal.

-----------------------------------
The accident was hardly spectacular from
most points of view; no one was injured, no large area was
seriously contaminated, the public was not frightened by reports
of real or imagined dangers. However, this accident did
effectively destroy the core of a reactor which at that time had
the highest flux of any in the world. It then provided the
first opportunity to explore the problems of dismantling a large
reactor.

Hmmm....hardly spectacular.   Then they discuss how they dump 10,000 curies "into the ground" and that they estimate the ground will "hold it" so it doesn't get to the river.

Normally, the cooling water from the reactor goes into a
delay tank before being discharged to the Ottawa river. It was
decided to empty this 2&0,000 gallon tank into the river and to
pump the water from the basement into the tank through a makeshift
pipe-line (Fig. 8). This provide~ enough time to make connections
to an 800,000 gallon tank that normally formed part of the reactor
cooling water supply system. While water from the basement wa&
being pumped into that tank, an emergency pipe-line, insulated
against the sub-zero temperatures, was built to take the water just
over a mile from the reactor to a waste-management area where it
was put into the ground. This pipe-line was finished 10 days
after the accident and a million gallons of water containing 10000
curies of long-lived fission products were then pumped through it.