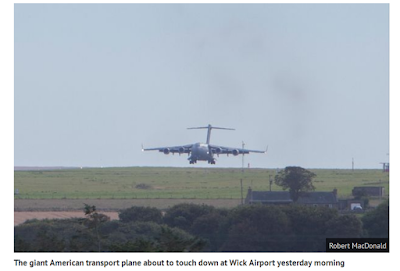 Anyone who is interested in being prepared, should think about owning a Geiger Counter and knowing how to use it.    And here is one reason--Obama has arranged to FLY nuclear waste into our airspace.

Second reason: when there is a radiological accident, they always cover it up, and they can't anymore.    And the largest damage to humans is done in the first few days.   So if you have your own information, you can more effectively protect yourself and your family.
------------------------------------------
We just learned today that they plan on conducting these flights for at least 18month, so there will potentially be hundreds of load of nuclear waste (actually highly enriched fissionable material) playing Russian roulette with our lives.

THE first flight believed to be carrying British nuclear waste to America took off from Wick Airport
amid tight security yesterday.
Scots politicians and anti-nuclear campaigners have slammed the deal,
brokered by David Cameron and Barack Obama, to move the waste.
The airport was closed from early morning as armed police patrolled the perimeter.

Twenty miles away in Thurso, more armed officers escorted a lorry from the Dounreay nuclear plant through the town. It was carrying two heavily reinforced containers.

They announced this is Spring 2016, but it never got any traction with MSM.   Imagine that.


Without any further discussion, and garnering only a brief reference in the NDA's Strategy consultation that Dounreay HEU may be 'transferred to a third party', it appears the previous public consultation processes - which were already fairly inadequate - have been ditched in favour of removing much of the materials to the United States in, as the BBC called it, "the largest ever such movement of nuclear waste".
No mention had previously been made of the US link and no specific public information has been provided to consultees.
NFLA are writing to NDA to now clarify how many transports, whether by sea or by air, will have to take place, and whether there will be any public consultation on this. It also wants to know what programmes the HEU arises from at Dounreay - such as nuclear submarine fuel, fuel for nuclear weapon warheads or from other military nuclear programmes.

We answers we need - and are not getting
There are a number of other important specific questions about this deal which also need answers, including: