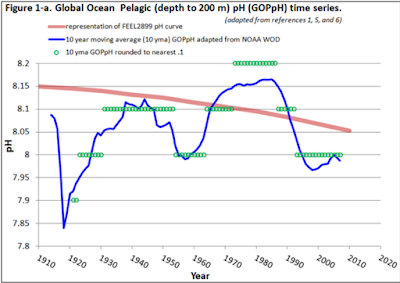 Seems like every publication
with "science" in it's name is pretty much the exact opposite.

Ocean pH is not acidic, it is basic, which is the opposite of acidic.   It has also been less basic (more towards acid) in the past.

Magazines are now being used as Propaganda tools.  NOAA is one of the worst, they even jiggered the temperature data at Obamas request to make a "stronger case" for the Paris-site climate conference.

The shell damage corresponds so precisely to where chemical changes have hit the marine world hardest — specific coastal hot spots in Washington and Oregon, where water wells up from the deep on windy days — that NOAA scientists said they could clearly pinpoint the cause: atmospheric CO2.

It starts out with a Statement, and then describes how a senior scientist at NOAA is going to prove why the premise is true.   In fact, they do nothing to prove the premise, but instead trot out all the scary ramification and buzz words.

If carbon dioxide makes up only a minute portion of the atmosphere, how can global warming be traced to it? And how can such a tiny amount of change produce such large effects?

And the love to use the term "forcing"


The long-lived greenhouse gases, however, can be considered an external forcing clearly influenced by human action.

And they love to use the term "clearly" when it is anything but clear.

And as part of the spin, they even had to invent a brand new "Epoch".    Then to give credibility to this newly defined era, they assume its existance by describing how some are naming it.

Some are calling this new epoch the anthropocene and it is all thanks to our increasing the relatively small amount of carbon dioxide in the atmosphere by burning the vast stores of carbon trapped inside of the fossil fuels that power our modern lives.

And then this evil Carbon is not just an invisible gas, it actually becomes a "blanket".

But the planets surface will be warmer, because a larger fraction of that infrared will be blocked by the blanket of greenhouse gases.  (CO2, methane, nitrous oxide).

The the rabid warmistas come out in the comments and add more stupidity....


Case in point. Despite low solar activity (high solar flares cause warming) Queensland and Australia in general recording higher temperatures for the month of March.


But then the "climate deniers" chime in


The global warming effect of carbon dioxide is constant with time and essentially independent of the density of carbon dioxide. This is because CO2 is an efficient absorber of infrared in the two spectral bands for this gas. It absorbs approximately 50% of the infrared energy for a meter of absorption length at the present 380ppm concentration. Thus all the energy it can absorb it does so in less than 100 meters. Increasing CO2 only shortens the absorption length in direct proportion of the density. With all the turbulence in the atmosphere CO2 increases are benign. CO2 absorbs about 8.3% of Earth's radiated infrared energy. This is constant over a very wide range of CO2 concentration. CO2 is not a problem.


What the hell is a "climate denier" just another ad hominem such an conspiracy theorist.

And they are so cock sure of themselves that it is CO2 and beyond that, caused by man.   But do they ever consider that it could be the overall toxic environment, including radiation that bio-magnify up to 2 million times in Chitin?

The two major structures are the buccal mass – chitin hooks – and

the radula, with a large number of small teeth. The move-
ments of these structures are under the control of the buccal
ganglion.

Hmmm, do you think that the pteropods might have trouble eating if one of their 2 major structures for eating was blow up by radiation?


In some parts of the North Pacific Ocean, pteropods may make up only 2 to 10 percent of plankton species, while copepods and krill — which are more nutritious — play a greater role, Mackas said. But in a few isolated spots pteropods can make up half or more of plankton species.

Truth doesn't seem to be a main goal of science these days.    Instead, in almost every study or article you read, the closing conclusion, not stated directly but almost so, is that we need more money, we need more grant money.

“I think this is a huge flashing light for us that we need better observations and monitoring of our natural environment,” she said. “We need better information.”

And thus the earth was lost, via grant whore scientists

Check out the "cute" graphic below

How much carbon are we putting into the ocean?

We’re dumping the equivalent of a hopper car of coal — about 100 U.S. tons — into the ocean every second.

Herring, mackerel and some seabirds eat pteropods, as do other pteropod species. In the open oceans, some small fishes, squids and large shrimp eat them. Some of those animals then become important in the diet of tuna, salmon and walleye pollock, the centerpiece of a $1 billion industry based in Seattle and Alaska.
--------------------------------------------
References:
1) Current Greenhouse Gas Concentrations (updated October, 2000)Carbon Dioxide Information Analysis Center(the primary global-change data and information analysis center of the U.S. Department of Energy)Oak Ridge, Tennessee
Greenhouse Gases and Climate Change (data now available only to "members")IEA Greenhouse Gas R&D Programme,Stoke Orchard, Cheltenham, Gloucestershire, GL52 7RZ, United Kingdom.

f. EPA Seeks To Have Water Vapor Classified As A Pollutantby the ecoEnquirer, 2006Alternate link: