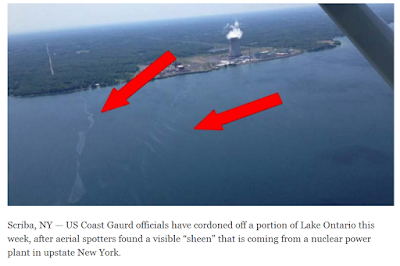 stock here: The Fitzpatrick Nuke Plant is at the Epi-Center of corruption of Gov Cuomo in New York.

They are going to steal $8B from the citizens to give to the nuclear industry, and "save" Fitzpatrick nuke plant.    But Fitzpatrick is old and not aging well.    Now it is leaking, no coverup possible, into the Great Lakes. 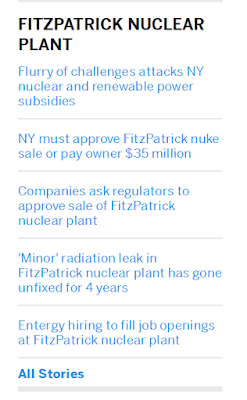 Scriba, NY — US Coast Gaurd officials have cordoned off a portion of Lake Ontario this week, after aerial spotters found a visible “sheen” that is coming from a nuclear power plant in upstate New York.

The Coast Guard Auxiliary aircrew first noticed the sheen on Sunday. Shortly after, a boat crew from the Oswego station tested the sheen and a “temporary safety zone” was put in place.
The Free Thought Project spoke to the Coast Guard Sector Buffalo Command Center on Tuesday and confirmed that the zone was still closed off, and there is no information as to when it will reopen.

The oil sheen is said to be coming from the vent for the hydrogen seal system of the Fitzpatrick plant is in Scriba, New York, approximately 10 miles northeast of Oswego.
Posted by Stock at 11:29 AM