OK High Fives to the first one that can answer the original source of: 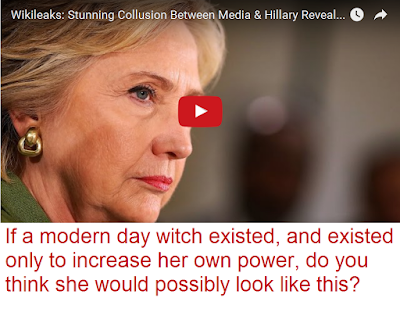 This polling source is easy to find.  Anyone looking for an online poll will find it.

amazingly, it is hard to find live online polls, although many poll results.    Seems Odd 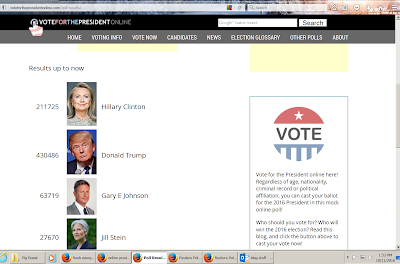 A Soldier's Experience With Hillary

Eric Bonner, a military K9 handler, posted the following on his Facebook page. His comments have gone viral. His military working dog, “Suli,” sniffs for bombs .

"I’m not voting for Clinton. It has nothing to do with her views. It really doesn’t even matter about all the laws she broke. It’s because she actually talked to me once! Almost a sentence.

Being a K9 handler in the military, I got to do a few details involving distinguished visitors... mostly Generals, DOD officials and Secretaries of Defense. I was lucky enough to pull two awesome details... Presidents George W. Bush and Obama.

GWB looked at me and smiled, then he said, “Man, who would piss you off?” Then he high-fived me and continued on. I was climbing down from a catwalk I had stood on for 4 hours with nothing but dust and a radio to keep me company. The radio died early on. It was pretty sweet.
Barack Obama, as he was walking out to his plane in Turkey, said to me, “What the hell kind of dog is that?” in reference to Suli.

• All of a sudden the President of the United States won't attend the funeral of a flag-rank Officer (Gen. Greene) killed in action; he (Obama) played golf. But he sends a big delegation to Michael Brown's funeral. He sends only a minor delegation to Margaret Thatcher's funeral. He won't acknowledge Chris Kyle's murder but he'll fly the Flag at half mast for Whitney Houston.
• All of a sudden, I'm sick to my stomach. I'm not sure the majority of Americans recognize the seriousness of the situation and how much "progress" has been made by Islam these last 7 years, a very brief time compared to a 75 year lifetime!

All of a sudden....POOF! NO U.S.A!!!!
Please wake up Americans.
If Hillary wins... she will be a continuation of Obama..... Don't forget; in all probability she will appoint Obama to the Supreme Court!
What a disaster to "our America" as we have known it!!!
If you agree, be strong enough to at least forward this to a few friends.

The ENTIRE WORLD needs to wake up and UNITE to END the 1400 plus year old WAR Islam has had with some part of the world.
Did you hear that?
Since the SIXTH CENTURY, and this is the twenty-first century, they have been fighting to take complete control of the entire world.