We should review how the super wealthy, the secretive Bilderburg "club", has a primary goal of weakening America AND extracting it's wealth, with mostly a move to Asia and their own accounts.

Honestly, I don't think that Islam itself is a huge problem, and co-existence would be possible.   But the powers that be have intentionally pitted Islam against America, against Christians.

That said, it would nothing short of irresponsible, perhaps even suicidally insane not to keep a close watch on any "radicalization" type of efforts, any recruitment of terrorists.    Germany is a very complex country, while they can get it wrong in such amazing fashion, they have also wisely phased out their nuclear power which is far too dangerous, and just lately, did raids in 60 cities to shut down a terrorist recruitment cartel.

FAREWELL TO BRITAIN --IT HAS BEEN ASSIMILATED--Hijrah; that's the takeover of a nation without going to war.

This is an interesting "Farewell to England" list of Islamic accomplishments in that country that I thought might give you a better understanding of the insidiousness of Hijrah; that's the takeover of a nation without going to war.
Don't think for a moment that America is not a target or that there are no American cities where Islamic and Sharia victories and takeovers have already occurred. It's time for border control, or start planning for a very big goodbye America party!
Here's what has already happened to England within a few years of opening their borders without entry control:
How the British have passively succumbed to the Muslim invasion:
All the following achieved by just 4 million Muslims out of the 66 million population:
Over 3,000 Muslim Mosques
Over 130 Muslim Sharia Courts
Over 50 Muslim Sharia Councils
Muslims Only No-Go Areas Across The UK
Muslim Women... 78% don't work and are on FREE benefits/housing
Muslim Men... 63% don't work and are on FREE benefits/housing
Muslim Families... 6-8 children planning to go on FREE benefits/housing and now all UK schools are ONLY serving HALAL MEAT! 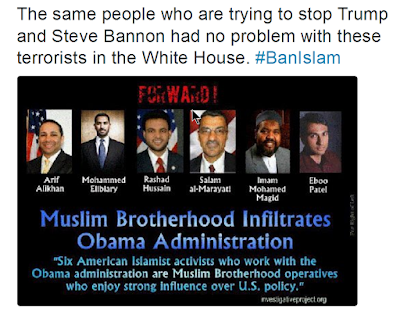 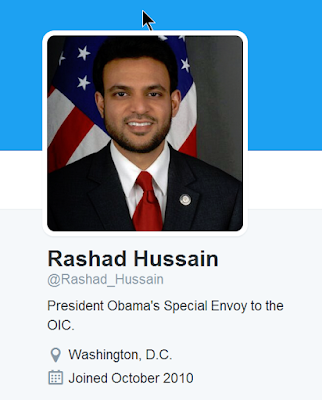 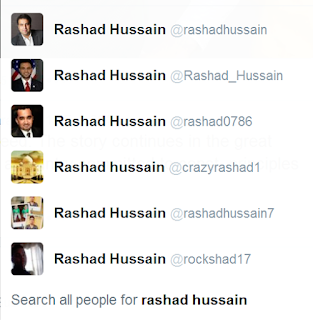 This guy doesn't look like he has a Twitter account -- the only one that doesn't.   The push on social media must be a closely calculated approach to winning the hearts of the disenfranchised, over indebted millennials living in their parents basements.


And here is another guy, put in position of high authority in "Homeland Security"

Ayers and Dohrn were on the run for almost a decade as fugitives for their involvement in the bombings of federal buildings, including the Pentagon and the U.S. Capitol, in protest of the Vietnam War. Ultimately, federal authorities dropped the charges against them because of FBI misconduct, The Hill reported.

Ayers later served alongside Obama on a number of charitable and education boards in his capacity as a professor, and hosted a 1995 campaign event for Obama, who was running for the Illinois state Senate at the time.

Robert Creamer, founder and partner of Democracy Partners, the group behind the organized violence at Trump rallies, as shown in the video by James O’Keefe and Project Veritas, is no ordinary agitator. Creamer, a convicted felon, is arguably the spiritual godfather of ObamaCare and much of the current progressive left agenda.

Creamer, along with his wife, Illinois Rep. Jan Schakowsky is no stranger to agitation, violence, and expanding the progressive agenda. As Investor’s Business Daily pointed out in March 5, 2010 editorial regarding protests against House Ways and Means Chairman Dan Rostenkowski over the Medicare Catastrophic Coverage Act of 1988, which expanded Medicare benefits and funded the change with a supplemental tax: