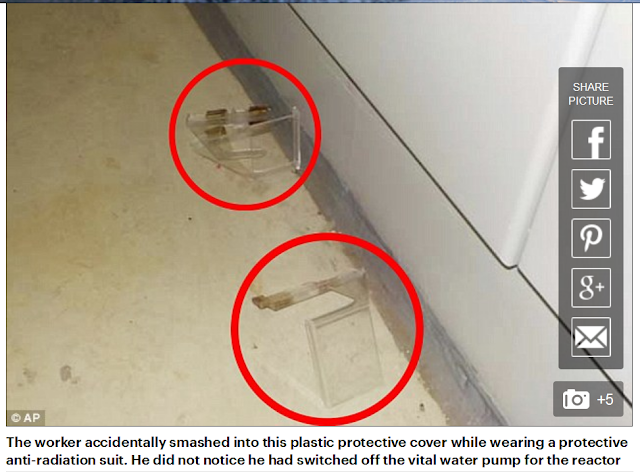 off and lying on the ground.    The worker would have heard this.   And then to also turn the switch.    Very unusual.

And the narrative comes out.  It was the "lack of space".    Sorry, no it wasn't, it was a poorly trained and careless worker who didn't care what he did, much less understand what he did.

OK I have built A LOT of motor control centers.   They all look like this, they are in electrical rooms in which the Architects know that "they will find a way to make it work".    In USA its 36" clear to allow work and to allow an escape path should Murphy step up.


They are ALL TIGHT!     It's not the tightness that caused this horrific blunder.    It's not human error either, it's Human "I don't really give a shite".

Monday's incident occurred when the worker was passing by a dimly lit isle that was only 2.8 feet wide, flanked by tall switch panels on both sides, Okamura said.
With radiation levels still high, the worker was wearing a full-face mask and hazmat suit when he lost his balance while carrying equipment.
His elbow jammed into the switch, breaking off its safety cover and inadvertently turning the lever to turn off the water injection pump to the No. 3 reactor.
Okamura acknowledged the lack of space at the site and said that the plant will seek ways to eliminate human errors like one on Monday.

World | Dec 5, 16:14
One of the melted reactors at tsunami-hit Fukushima nuclear power plant had a temporary loose of cooling when a worker accidentally bumped a switch while passing through a narrow isle of switch panels during an inspection and turned off the pumping system.
The plant operator, Tokyo Electric Power Co., said cooling for the No 3 reactor, one of the three reactors that melted following the 2011 earthquake and tsunami, was out for nearly one hour today until a backup pump kicked in.
TEPCO said the reactor had enough water left inside and there was no temperature increase or radiation leak from the incident.
TEPCO acknowledged some other key switches are in similarly tight locations. -AP

To "win" this..the numbed public has to be able to morally side with us..globally..as long as we all..the numb and the awaken.. dont "see eye to eye"..we will be kept by TPTshouldentB 's official narrative a minority "cult" dwelling in "fake news"..there will never be enough energy to stop our exploitation to death..
Imaging how bad the manipulation of the public perception could have been if the protesters had not been selfrestrained aka peacefull..
Jordan UNDERCOVER: Racism Alive & Well In North Dakota
https://www.youtube.com/watch?v=2X-dWa2MhxE