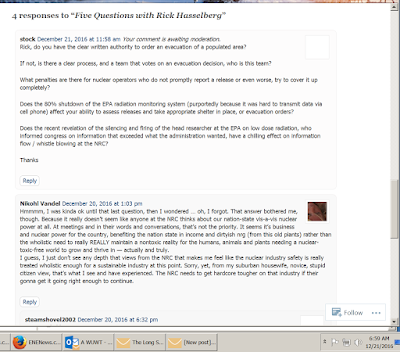 The NRC, partly in their hubris of thinking they are really doing a good job and regulating, has a pretty strong effort to "engage the public" via their NRC blog with comments.   They moderate, but appear to be fairly non-jack booted.


I had this to say at the NRC blog….be good to see some of yous guys there.

Rick, do you have the clear written authority to order an evacuation of a populated area?
If not, is there a clear process, and a team that votes on an evacuation decision, who is this team?

What penalties are there for nuclear operators who do not promptly report a release or even worse, try to cover it up completely?

Does the 80% shutdown of the EPA radiation monitoring system (purportedly because it was hard to transmit data via cell phone) affect your ability to assess releases and take appropriate shelter in place, or evacuation orders?

Does the recent revelation of the silencing and firing of the head researcher at the EPA on low dose radiation, who informed congress on information that exceeded what the administration wanted, have a chilling effect on information flow / whistle blowing at the NRC?