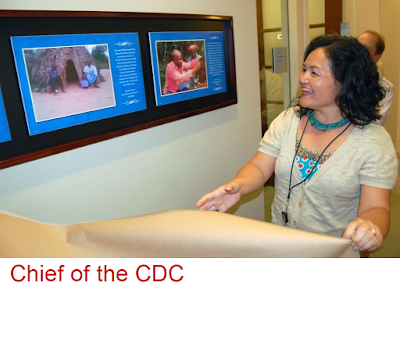 stock here: We been harping on "Lying Scientists" for quite some time.     It exasperates the effects of our toxic environment when those at the helm of science play fast and loose with facts.

Here is the lady in charge of the CDC.    Seems like widespread abuse of the scientific
process.    As we always suspected, really knew, just didn't have the proof.

Interesting that the CDC flickr photo collection is not focused on USA Health, but they have assembled a few dozen very expensive people to unveil................artwork/pictures taken in Nigeria


There is a group of anonymous scientists at the US Centers for Disease Control—they call themselves the Spider Group—Scientists Preserving Integrity, Diligence and Ethics in Research. They have penned a letter to the CDC’s chief of staff, Carmen S. Villar:
Here is the explosive accusation they make:


“We are a group of scientists at CDC that are very concerned about the current state of ethics at our agency. It appears that our mission is being influenced and shaped by outside parties and rogue interests. It seems that our mission and Congressional intent for our agency is being circumvented by some of our leaders. What concerns us most, is that it is becoming the norm and not the rare exception.”


“Some senior management officials at CDC are clearly aware and even condone these behaviors. Others see it and turn the other way. Some staff are intimidated and pressed to do things they know are not right.”


“We have representatives from across the agency that witness this unacceptable behavior. It occurs at all levels and in all of our respective units. These questionable and unethical practices threaten to undermine our credibility and reputation as a trusted leader in public health. 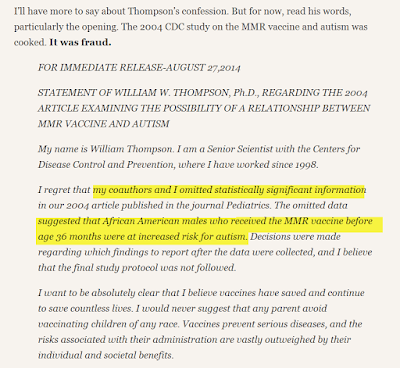 Here it is. All the people who said we were making it up, inventing charges of fraud at the CDC Whistleblower William Thompson’s own statement, released from his lawyer’s office today.
CDC…well, here it is.
I’ll have more to say about Thompson’s confession. But for now, read his words, particularly the opening. The 2004 CDC study on the MMR vaccine and autism was cooked. It was fraud.


FOR IMMEDIATE RELEASE-AUGUST 27,2014
STATEMENT OF WILLIAM W. THOMPSON, Ph.D., REGARDING THE 2004 ARTICLE EXAMINING THE POSSIBILITY OF A RELATIONSHIP BETWEEN MMR VACCINE AND AUTISM
My name is William Thompson. I am a Senior Scientist with the Centers for Disease Control and Prevention, where I have worked since 1998.
I regret that my coauthors and I omitted statistically significant information in our 2004 article published in the journal Pediatrics. The omitted data suggested that African American males who received the MMR vaccine before age 36 months were at increased risk for autism. Decisions were made regarding which findings to report after the data were collected, and I believe that the final study protocol was not followed.
I want to be absolutely clear that I believe vaccines have saved and continue to save countless lives. I would never suggest that any parent avoid vaccinating children of any race. Vaccines prevent serious diseases, and the risks associated with their administration are vastly outweighed by their individual and societal benefits.
My concern has been the decision to omit relevant findings in a particular study for a particular sub­ group for a particular vaccine. There have always been recognized risks for vaccination and I believe it is the responsibility of the CDC to properly convey the risks associated with receipt of those vaccines.
I have had many discussions with Dr. Brian Hooker over the last 10 months regarding studies the CDC has carried out regarding vaccines and neurodevelopmental outcomes including autism spectrum disorders. I share his belief that CDC decision-making and analyses should be transparent. I was not, however, aware that he was recording any of our conversations, nor was I given any choice regarding whether my name would be made public or my voice would be put on the Internet.
I am grateful for the many supportive e-mails that I have received over the last several days.
I will not be answering further questions at this time. I am providing information to Congressman William Posey, and of course will continue to cooperate with Congress. I have also offered to assist with reanalysis of the study data or development of further studies. For the time being, however, I am focused on my job and my family.
Reasonable scientists can and do differ in their interpretation of information. I will do everything I can to assist any unbiased and objective scientists inside or outside the CDC to analyze data collected by the CDC or other public organizations for the purpose of understanding whether vaccines are associated with an increased risk of autism. There are still more questions than answers, and I appreciate that so many families are looking for answers from the scientific community.
My colleagues and supervisors at the CDC have been entirely professional since this matter became public. In fact, I received a performance-based award after this story came out. I have experienced no pressure or retaliation and certainly was not escorted from the building, as some have stated.
Dr. Thompson is represented by Frederick M. Morgan, Jr., Morgan Verkamp, LLC, Cincinnati, Ohio, www.morganverkamp.com.