"They" did not distribute or recommend Potassium Iodide in Japan, which would have avoided many of these cancers.     "They" the lying scientists and doctors say that thyroid cancer can be successfully treated.    Ya right, by thyroid removal or by blasting it with so much radiation that the thyroid dies completely.

But the thyroid controls your whole metabolism, and other important functions.    Shame on the medical industry for pretending to be heroes by "curing the cancer" as opposed to preventing the cause of the cancer.    Shame, Shame.

After the Great East Japan Earthquake and Tsunami in March 2011, radioactive elements were released from the Fukushima Daiichi Nuclear Power Plant. Based on prior knowledge, concern emerged about whether an increased incidence of thyroid cancer among exposed residents would occur as a result.

After the release, Fukushima Prefecture performed ultrasound thyroid screening on all residents ages 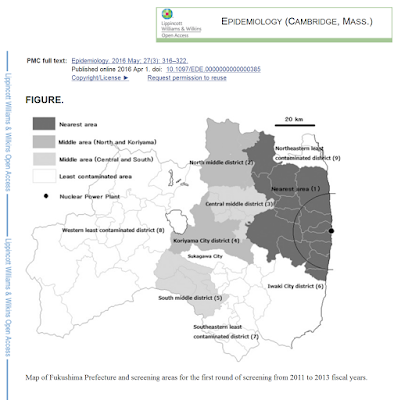 ≤18 years. The first round of screening included 298,577 examinees, and a second round began in April 2014. We analyzed the prefecture results from the first and second round up to December 31, 2014, in comparison with the Japanese annual incidence and the incidence within a reference area in Fukushima Prefecture.

The highest incidence rate ratio, using a latency period of 4 years, was observed in the central middle district of the prefecture compared with the Japanese annual incidence (incidence rate ratio = 50; 95% confidence interval [CI] = 25, 90). The prevalence of thyroid cancer was 605 per million examinees (95% CI = 302, 1,082) and the prevalence odds ratio compared with the reference district in Fukushima Prefecture was 2.6 (95% CI = 0.99, 7.0). In the second screening round, even under the assumption that the rest of examinees were disease free, an incidence rate ratio of 12 has already been observed (95% CI = 5.1, 23).

An excess of thyroid cancer has been detected by ultrasound among children and adolescents in Fukushima Prefecture within 4 years of the release, and is unlikely to be explained by a screening surge.