I shall once again point out that even though the contamination levels in the Pacific are diluted to what the paid scientists like Kenny Boy Buessler and Jay Cullen (Culling) say are safe, there are specific biological structures that magnify the radiation 20 to 2,000,000 times the background level. Radiation is one of the few things that can destroy this important biological structure called Chitin. Here-in I layout the scientific basis for the destruction of the Pacific Food Chain. It's fairly easy to follow. I have sent this to over 100 so called scientists, and nary a peep. It goes against the narrative. https://nukeprofessional.blogspot.com/2016/02/a-scientific-basis-for-destruction-of.html
Posted by Stock at 7:51 AM 2 comments

Tomorrow, Trump meets with all 100 senators for a briefing on North Korea.    That likely means war, and that could go nuclear. 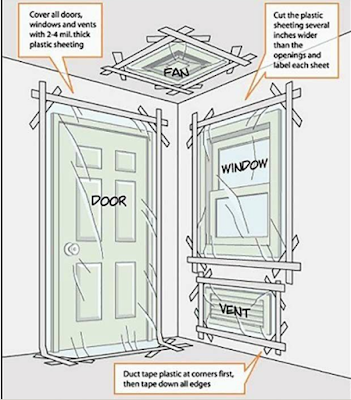 A day or 3 after that USA will be pelted with fallout.


Print this list now, in a font you can read in lower light.
Start pulling it together in one or 2 large boxes.    But keep them to a size that the second strongest member of your group can still load into a vehicle in case Shelter in Place turns into Get The Hell out of Dodge.

It took me about 3 weeks to pull together all this stuff in an efficient manner.   It could probably be done in 1.5 days with a full court press effort.


When the SHTF there won't be electricity, computers, thumbdrives, readers.

Read now, Print Now....when you need them you won't have the ability to start up your computer and printer.   Do not store "online", do not store on a thumbdrive.    Knock yourself upside the head and think about what it will be like.

Island Breath -- Exposing the Death Of the Pacific Via Fukushima

I wanted to give you an idea of someone in Hawaii who is actually covering Fukushima.   Please visit and let them know stock sent you.

span style="font-weight: bold;"> By Admin on 19 March 2017 for ENEnews -
(http://enenews.com/report-hundreds-of-millions-of-pacific-salmon-missing-presumed-dead-govt-issues-emergency-order-along-us-west-coast-japan-suffering-historic-collapse-fish-starving-to-death-all-forms-of) 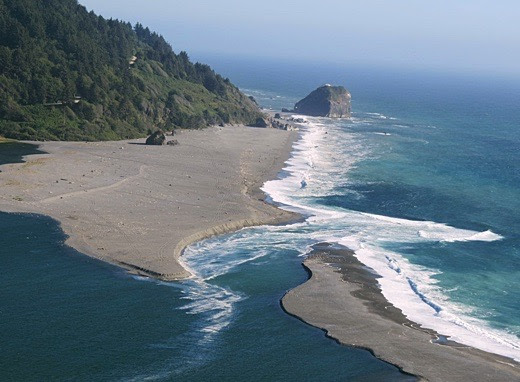 Image above: Mouth of the Klamath River near Klamath, California. From (http://www.heraldandnews.com/news/local_news/worst-klamath-chinook-run-on-record-forecast/article_dcbaf22f-f694-5bee-9c76-c7a7c1ea2647.html).

[IB Publisher's note: Certainly global warming, and other factors like tsunami debris, plastic gyres, military operations, over fishing and other factors are contributing to ocean die-off - we believe that the lack of any mitigation of Fukushima radiation entering the Pacific stands in the way of possible recovery of ocean life. The collapse of  northern Pacific Ocean salmon population continues. We recommend not eating fish that has spent time in radioactive waters. See Ea O Ka Aina: Hawaii Seafood Guide. That would include all salmon caught off the west coast of the United States.]

South Yuba River Citizens League (SYRCL), Mar 16, 2017
The low salmon run size for the Yuba River appears to be part of another regional salmon collapse. The California Department of Fish and Wildlife point to preliminary data from the Sacramento River that indicates salmon runs have also dropped to record low levels. According to Dan Bacher’s reporting, last year’s salmon run on the Klamath River was a 38-year low… Gary Reedy, SYRCL’s consulting salmon expert reports that “A new crash for the Central Valley Chinook salmon is not unexpected.”…

Mendocino Beacon, Mar 16, 2017:
Returns of spawning Klamath River fall Chinook are projected to be the lowest on record in 2017… “The salmon runs this year will present a challenge for ocean fishermen and managers throughout the West Coast,” said Executive Director Chuck Tracy… “the low forecast for Klamath River fall Chinook is unprecedented”… “This year will be an exceptionally difficult year for ocean salmon fisheries, especially in Oregon and California”… said Council Chair Herb Pollard.

The Oregonian, Mar 15, 2017:
The worst run forecast on record for the Klamath River’s chinook salmon could close all salmon fishing along most of the Oregon Coast this summer…

Juneau Empire, Mar 6, 2017:
Spring king fishing canceled by emergency order… the Juneau area will be closed for king salmon fishing… biologists expect a second-straight year of record-low king salmon returns on the Taku River. “We’ve been in a period of low productivity, not just on the Taku, but on several rivers up and down the coast,” Juneau Area Management Biologist Daniel Teske said… Nobody knows exactly why Southeast king salmon are struggling, but biologists do know where the fish are being affected: in the ocean… The increased die-off must be happening in a marine environment, Teske said, otherwise numbers on the four rivers wouldn’t fall at the same time…

Minato-Tsukiji, Mar 3, 2017:
The harvest in Hokkaido was the worst in 24 years… Beginning with the Sanriku area, landings all over Honshu were below those of the previous year… The number of returning four-year-olds, which are regarded as the main shoal, was a record low…

Undercurrent News, Feb 1 , 2017:
Japanese salmon fisheries in historic collapse — Landings in Hokkaido, Japan are the lowest in nearly three decades, reports the blog RussGeorge.net. The volume of salmon caught at main fishing ports, including Hokkaido, plunged 30-40% in 2016 from the previous year. The figure represented the lowest level in 28 years. The collapse has been confidently attributed to the starvation of four-year-old Chum salmon…

Hokkaido Shimbun, Jan 31, 2017:
Salmon landings in Hokkaido in 2016 are the lowest in three decades — The number of salmon caught in Hokkaido in 2016 plunged 29.4% from the previous year… The figure represented the lowest level in 28 years… Local fishermen have been increasingly concerned over the fact that the trend of meager catch that continued in recent years has not been held in check…

Russ George, Jan 31, 2017:
News from Japan is terrible for NW Pacific fish… Local fishermen have been increasingly concerned over the fact that the trend of meager catch that continued in recent years has not been held in check and indeed is worsening every year… Given the shortfall of fish and the scrawny condition of the fish that were caught all evidence points to a cataclysmic collapse of ocean pasture primary productivity and fish starving at sea… Across the Pacific ocean salmon pastures have failed…

Published on Apr 9, 2017
Dr. Timothy Mousseau, Professor of Biological Sciences, University of South Carolina. Mousseau discussed his many studies on the health impacts on wildlife and biota around Chernobyl and Fukushima which soundly debunk the notion that animals there are “thriving.”


The top dogs of the Globalists (aka one world government) are George Soros, Henry Kissinger, the Rothschilds, the Rockefellers (and lets all be happy that the human heart purchasing David Rockfeller is  recently dead).   I am sure there are some other lynch pins, but that's a good start.

Here is an example of how they ARE rolling out their agenda.


BREAKING: America Is Under Attack By These 187 Groups Funded By George Soros


Some contributions by readers:


This site has a list of NWO quotes.
http://www.theforbiddenknowledge.com/quotes/index.htm

This is JFK's speech in which he talks about Secret Societies.
https://www.youtube.com/watch?v=zdMbmdFOvTs

This site has the transcript of Kennedy's speech.
“I think that his [Obama’s] task will be to develop an overall strategy for America in this period, when really a New World Order can be created.”
—Henry Kissinger, CNBC 2008

“In the next century, nations as we know it will be obsolete; all states will recognize a single, global authority. National sovereignty wasn’t such a great idea after all.”
—Strobe Talbot, Deputy Secretary of State, TIME, July l992

“One of the least understood strategies of the world revolution now moving rapidly toward its goal is the use of mind control as a major means of obtaining the consent of the people who will be subjects of the New World Order.”

If there is no New World Order, why do all these presidents and politicians talk about it?
https://www.youtube.com/watch?v=R2c9PMV3ZJg
The angry reaction of our friends and associates is telling; They are angry for a reason; they cant stand an upset in their world vision. The more the comfort zone of their world or religious ideology is upset, the angrier they get. Was the demolition of the world trade center an inside job? The ramifications are too much for them.
Emotion rules peoples reality, not facts and logic. There are always enough facts to argue endlessly. emotion decides the belief. Those people have not been divided from us by subversive organizations, they were ALREADY that way. They were snitches in Nazi Germany, they were angry and turned on their neighbor during the inquisition. Our friends are few indeed and the others we will never convince.


Hawaii has 112,000 people in government housing (I don't include the military in those numbers), and the most staunchly Democratic state in the union.
Indeed, the atmosphere was much more aggressive, upset. People got their undies all bunched up with the Hillary loss/Trump victory.
I have even gone on fake facebook to some liberal sites and tried to "fit in" and try to understand what makes them tick. I will let you know how that turns out…..lol, kind of entertaining.


Proofs of a Conspiracy Against All the Religions and Governments of Europe, Carried on in the Secret Meetings of Free Masons, Illuminati, and Reading Societies
By John Robinson, A.M.
1798 John Adams Library collection
PDF-
https://ia601209.us.archive.org/0/items/1798ProofsOfAConspiracyIlluminatiFreemasonsRobisonJohnAdams/1798%20Proofs%20of%20a%20Conspiracy%20Illuminati%20Freemasons%20Robison%20John%20Adams.pdf
Alt link -
https://www.scribd.com/document/344221671/Proofs-of-a-Conspiracy-Illuminati-Freemasons


I found that Kenny Boy has been testing some krill and phytoplankton.

In terms of potential biological impacts, radiation doses in marine organisms are generally dominated by the naturally occurring radionuclides 210Po (an alpha emitter) and 40K, even when organisms are exposed to anthropogenic radioactivity discharged to coastal waters (14). To be comparable just to doses from 210Po, 137Cs levels in fish would need to range from 300 to 12,000 Bq⋅kg−1 dry weight, some 1–3 orders of magnitude higher than what we observed ≥30 km off Japan.

We know Po is dangerous to spies…..

Have you studied Po?    Is he making his comparison based on “energy deposited to a bag of water”

Quite a lot of studies on Marine Po

The concentrations of210Po and210Pb were determined in about 30 species of marine organisms collected mainly from the north-easterm region of Japan to know the levels and distributions of these radionuclides and to estimate their intake levels from marine foods.210Po and210Pb showed a wide range of concentration in species: 0.6–26 and 0.04–0.54 Bq/kg (wet wt) in fishes, 0.5–220 and 0.2–43 Bq/kg (wet wt) in molluscs, echinoderms and chordatas, and 2.8–4.3 and 0.4–1.3 Bq/kg (wet wt) in algae, respectively. Higher accumulation of210Po relative to210Pb was found in all of the samples analyzed. The intake levels of210Po and210Pb by marine foods consumption were roughly estimated to be 0.48–0.69 and 0.022–0.042 Bq/d per person, respectively, on the basis of the statistical data on the consumption of seafood and/or production rates of marine foods.

Fukushima Now Being Recognized as A Trillion Dollar Eco-Disaster 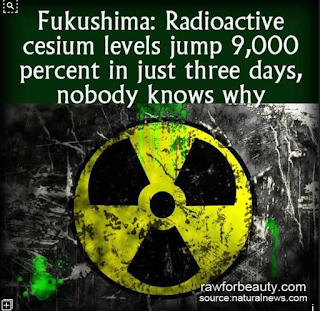 The truth is "leaked out".    It prevents a dramatic response for the population at large.   A revolt is avoided.   And as the years go by, some sheeple switch to "I knew that all along". 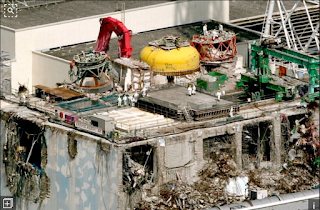 The total cost to deal with the Fukushima Daiichi nuclear plant disaster has been estimated at 70 trillion yen ($626 billion), over three times more than the government calculation, a study by a private think tank showed Saturday.

The Japan Center for Economic Research said total costs at the Fukushima nuclear complex operated by Tokyo Electric Power Company Holdings Inc. could rise to between 50 trillion and 70 trillion yen. It compares with the roughly 22 trillion yen a government panel estimated in December.

"If costs rise, the public burden could greatly increase. The country's nuclear policy needs to be reviewed," the JCER said.
Posted by Stock at 12:50 PM 3 comments