Dilbert Is Smart Enough To See Through the "Fight Carbon" Lies, Simply a Tool For Global Control Over Energy 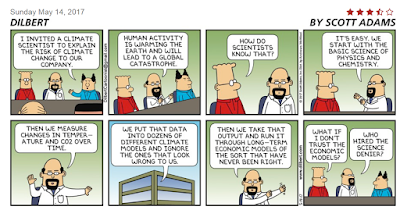 Robust comments there, here is one of them.


Well, we might as well get some facts here, facts that do not fit the narrative. Indeed, had poor Dilbert mentioned these to "Michael Mann", he would have been subjected to a quite long stream of abusive tweets about his being a science denier. And yet every proposition presented below is so well supported by data that we teach it to first year paleoclimatologists.

First, this is NOT the hottest year "on record", unless one cherry picks the record to make it so. For example, a consensus view (see Marcott et al. (2013) Science 339, page 1198) notes that temperatures today are ~ 75th percentile since the end of the last Ice Age 11000 years ago (this is a period of time called the Holocene). That is, in the last 11000 years, 25% of the years have been warmer than today. This includes the Medieval, Roman, and Minoan warm periods, the first of which the Mann "hockey stick" tried to eliminate from widely accepted fact, because it denied his political goal.

All natural variability. And no, these warmer temperatures did not cause the polar bears to go extinct, the coral reefs to die, or methane to bubble from the permafrost and make Earth into Venus. And, yes Dilbert, no computer model accounts for it.

Another proposition that is well supported by data: Modern global warming did not begin in 1880 (when thermometers became available). It began with the end of the Little Ice Age, about 250 years ago. And yet this was long BEFORE anthropogenic CO2 was a factor. The computer models that we are supposed to believe, at the threat of being called a "denier", cannot account for this either.

Nor is the RATE of current temperature change greater than that seen naturally. Abrupt changes in temperature occur for entirely natural reasons, as climate science has studied for a half century (See Flohn (1979). "On Time Scales and Causes of Abrupt Paleoclimatic Events." Quaternary Research 12:135-149. for a paper that all of our students read). And the current rate of temperature change is small compared to any of these. And nope, no computer models account for these.

And, of course, the computer models behind the Paris Accords are failing. Thus, over the last 10 years, the temperature has been roughly constant, variously measured, even though human generated carbon dioxide continues to increase. Our models are missing some negative feedback. Low clouds may be one of these.

Now, in the Climategate emails, people affiliated with Michael Mann admit that their computer models do not work. That is, not only do the computer models fail, and not only does everyone expect them to fail (given the approximations that go into expect them to fail), but the people who create them KNOW that they fail. And yet any Dilbert who dares to point this out is a "science denier".

And, of course, simple math shows that even if the models were correct, and even if every item of policy in the Obama agenda, the Paris Accords, and Al Gore's wish list were implemented, 100%, the result will be no measurable impact on climate in the face of human population growth and industrialization The only effect will be to enrich third world corruptocrats.

How do we know the last? It is like trying to get medical care into the third world. You can offer to give Zaire FDA-approved drugs free of charge. But then the Zaire govenment will say: "Great, but first you must pay $10 million to move them through Zaire drug approval, at the Zaire Drug Approval Bureau". Which, conveniently, is run by the brother in law of the president of Zaire. And the money ends up in a Swiss bank account.

Pretty much every uncorruptedclimate scientist agrees that climate change is real, it occurs naturally, natural variation can be large and rapid, only a part of current change (and possibly a small part) is caused by human CO2, the models behind the Paris Accords fail, yet even if they did not fail, the Paris accords will do nothing significant about CO2 in any case, but will fill the Swiss bank accounts of third world corruptocrats.

Even the engineer Dilbert can see this. Yes, that "science denier."
But say that you buy into Michael Mann's big lie. If you actually want to reduce US CO2, you should simply convert to natural gas (by way of fracking) for your transportable fuel needs, and do what the French did for fixed power generation; convert all the current coal-fired plants to nuclear power. Especially some of the modern versions where fuel is less expensive and waste products are less onerous. But that would not meet the political goals of Gore, Obama, ...

And still, you have people like Mara Naile Akim, who does not understand how "burden of proof" works in science.

Some of the classic pro nuke trolls showed us, since I showed up

http://dailycaller.com/2015/05/19/more-countries-caught-manipulating-their-climate-data/
Posted by Stock at 4:05 PM