In 2016 we busted NOAA and MSM dead to rights lying about all the deaths, throwing out "Domoic Acid" as the main culprit even though when I got my hands on their real data, it only showed 1 to 3% deaths caused by Domoic Acid.

Starvation and a weakened immune system were the main culprits, as they are now.

So we know that krill are highly affected by even low levels of radiation in the environment, proven by test data on the CS134/CS137 ratio in water showing that the krill are taking CS134 to Davy Jone locker at faster rates because it kills them faster.

The disappearance of krill also allows other phytoplankton to expand.    More algae.   More Domoic Acid.    Domoic Acid latches on to Brain Neurons and causes them to fire.   But here is the real kicker, Domoic Acid acts like a chelator and can grab and carry heavy metals with it.

So any radioisotopes present can be neatly delivered right right to the brain neurons, for a wicked double whammy.

Additionally, we know that even low levels of radiation bio-magnify in Chitin, a biological structure of great importance in many ocean flora and fauna.    Radiation is one of the few things that can break the tough Chitin bonds, so it can blow up the structure of animals and plants.   But its destruction does not have to end just there.   It can also, when close to DNA, destroy that DNA.

But it gets even "better", Chitin is also used in cell walls, where it affects  the ionic and voltage gradients which are prime mechanisms that allow and tell cells how to function, change, grow.    Morphogenesis -- is the fancy way of describing how cells grow into different body parts, and so it should be obvious that having damaged Chitin in the cells is not going to be a good thing for proper cellular development.

But if you ask the "scientists" at the International Atomic Energy Association, they will explain that radiation damage can be 100% calculated by modelling the human body literally as a bag of water with energy being deposited into it.    It is shameful.

But the military/fed funded scientists who are directed to make sure that people are smiling and unaware of the causes of the mass die-offs:
1) Test the water only, and state how there is no danger
2) Hang their hats on the ICRP radiation danger dose model (just a bag of water)

Domoic acid is a heavy metal transporter used by those toxic plankton to modulate different metals to their needs…iron, copper… There is an analogy; Some molds thrive in radioactive environments…they live off it. They use melanin, and the mold is black with it.

So anyway its a possibility, just a hypothesis, that the nuclear toxins are better handled by the toxic algae because of the domoic acid, which gives them an edge in the competitive world.

The domoic acid may bioconcentrate radionuclides also, and I wonder if it is shuttled to the nervous system. As an analog of glutamate, an excitatory neurotransmitter,

DA binds to the kainate type of glutamate receptors, but with a binding capacity three times greater and 20 times more powerful than kainic acid

run with it stock…call it a discovery

per code
----------
Chitin is a polysaccharide biological structural polymer found in exoskeletons, like insects, crabs, beaks of squid etc, and combined with calcium carbonate to form shells of crustaceans. It absorbs radioactive fallout.

"radiation destruction of chitin
The change in functional composition and molecular mass of crab, shrimp, and Antarctic shrimp (krill) chitin under the effect of ionizing radiation has been studied….it was established that primary radicals appear in positions 1 and 4 of the pyranose ring with subsequent breakdown of the glycoside bond analogous to cellulose and chitosan decay when γ-irradiated."
https://inis.iaea.org/search/search.aspx?orig_q=RN:26023735 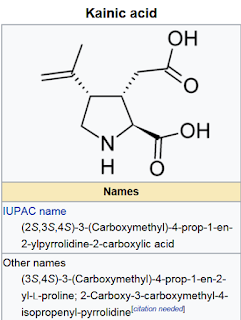 Kainic acid is commonly injected into laboratory animal models to study the effects of experimental ablation. Kainic acid is a direct agonist of the glutamic kainate receptors and large doses of concentrated solutions produce immediate neuronal death by overstimulating neurons to death.

Such damage and death of neurons is referred to as an excitotoxic lesion. Thus, in large, concentrated doses kainic acid can be considered a neurotoxin, and in small doses of dilute solution kainic acid will chemically stimulate neurons.[2]

Morphogenesis (from the Greek morphê shape and genesis creation, literally, "beginning of the shape") is the biological process that causes an organism to develop its shape. It is one of three fundamental aspects of developmental biology along with the control of cell growth and cellular differentiation, unified in evolutionary developmental biology (evo-devo).

The process controls the organized spatial distribution of cells during the embryonic development of an organism. Morphogenesis can take place also in a mature organism, in cell culture or inside tumor cell masses. Morphogenesis also describes the development of unicellular life forms that do not have an embryonic stage in their life cycle, or describes the evolution of a body structure within a taxonomic group.

Morphogenetic responses may be induced in organisms by hormones, by environmental chemicals ranging from substances produced by other organisms to toxic chemicals or radionuclides released as pollutants, and other plants, or by mechanical stresses induced by spatial patterning of the cells.

cant wait until you realize the other part of the story stock. The chitin acts like an ion exchange resin…and the radiation CAN break down the chitin,
http://enenews.com/mass-death-species-found-around-fukushima-nuclear-plant-govt-disappeared-little-reproductive-success-evident-biota-around-power-plant-affected-nuclear-accident/comment-page-1#comment-746906
BUT there is a whole other path of influence. The chitin machinery is right there on the cell wall, and several things have been discovered which influence morphogenesis…which limb goes where…which microtubule in the cell cytoskeleton goes which way…among which influence is the ionic gradient and the voltage gradient.

So EVEN IF the chitin is not degraded significantly, or if its consumed by a non chitin based animal…it still forms a hot spot of ionic and voltage gradient which can interfere with morphogensis on the macro and micro scale.

Indeed, ion gradients and flow is a large factor in biochemical process and morphogenisis. Needless to say this is a deforming potential not directly related to DNA breaks.

In fact has been found that organisms can select for different isotopes; "it is thought that accumulation of radionuclide elements follows that of nonradioactive elements. However, with the
discovery of isotope discrimination for a number of elements by a range of organisms, this may not hold true.

You arent done with your discovery process

This fits in there.

"Collectively these data demonstrate that low-dose ionizing radiation has an important effect on absorbing water, consuming O2 and releasing CO2, which means the risk for embryo and endosperm development was higher."

Localization of chitin in algal and fungal cell walls by light and electron microscopy.

The low iron treatment may have increased the susceptibility of S. marinoi to other stressors, in this case, domoic acid. Previous studies have shown that nutrient limitation increases the susceptibility of phytoplankton to radiation [23,24] and to unidentified allelopathic compounds produced by other phytoplankton [25]. From this experiment, it is not clear whether domoic acid directly inhibits the growth of S. marinoi or if domoic acid binds iron, and reduces iron availability to the already iron limited S. marinoi cells

May 31, 2017 at 5:07 pm · Reply
Formation of excessive fibrinogen inside arteries and vessels is an inflammatory response to a toxin, or pathogen. There may be other causes. Kent Holtorff, M.D., discusses this in detail in a video at his website. He discusses it in the context of an inflammatory cascade and the long-term development of chronic disease states.
'Ho out ….

for what its worth....the fallout is absorbed and travels with the MSG, and thus most assuredly with the glutamine and domoic acid,  binds to the glutamine receptors and lingers there.  The glutamine is heavily tied to mitochondria health, cancer progression, vascular inflammation, thrombosis, and on.  The key story is that science believes without question that radiation = radiation. But we know that both specific activity and the largely unexplored frequency and harmonics, as well as the chemical nature of the isotope all differentiate man made radiation
from so called background.   This is the hurdle...convincing young
scientists that nuclear fallout is different, worse, of unknown biological cascade effect, promotes morbidity, not just all or nothing hit or miss cancer, bioaccumulates in known and unknown ways and causes hot spots on macro and micro scales