Apparently, anyone who supports the President of the United States of America is fair game for any type of attack, LOL, imagine that. 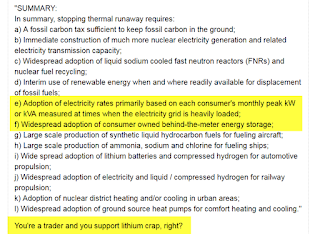 plays into the hands of the utilities, and against the consumer

I then posted a rebuttal to points e and f, which is summarized in an article here:

Troll responds with the non-sensical tripe below

Note in the screen cap, right, he says "you're a trader and you support lithium crap, right?"

The nuclear cartel has a dossier on me, for quite a few years.   They have dug deep and found other websites I have run, including one I did on technical stock and futures trading, of which I am an expert but refuse to participate in the sham of a market that currently exists.   Bottom line, I haven't mentioned stock trading in many months, so the only one that would bring up something like this, is someone that knows me very well, or someone who has recently skimmed the "Dossier". 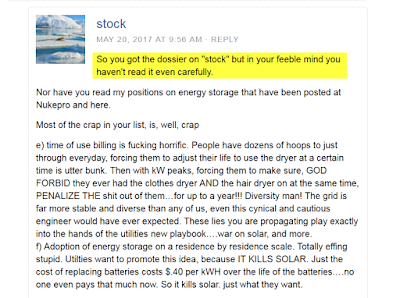 May 20, 2017 at 10:12 am · Reply
You don't seem to get it, they promote "their" solar stuff, along with the nuke crap, their smartgrid and whatever bullshit it is they sell.
Why? Because, like for instance the land you live on, you'll still support it.

Farthington MacMananus
May 20, 2017 at 10:13 am · Reply
With "it", I mean, government delegation. In the way you're trying to support Trump. In the way that you pay taxes, in the way you were "granted" a "right" to that land you falsely consider yours.

May 20, 2017 at 10:23 am · Reply
Typical sociopathic vague and obtuse sentence formation, you have already been called out on this, its your calling card.
Please point to any single contribution you have made to this site. just one to start.

by Stock------
"Trying to defend Trump" is different than trying to expose an evil cartel that has purchased the media, spends hundreds of millions to disrupt America, and is just pure making shit up…..
To further harm America.
This should be obvious to all
But yes I will also defend the President of the USA against pure unadulterated bullshit attacks that are damaging to the USA and our ability to improve our lot.
I will point out when a group is so desperate to cripple or remove our president, that they will risk nuclear war just to accomplish their goal.

Farthington MacMananus
May 19, 2017 at 11:20 am · Reply
So, is it bullshit that he associated with the clintons, epstein, uses outsourcing too, has been bankrupt to the tune of billions, requiring american taxpayers to bail him out, had rothschild accountants for him (article is on forbes if you wanna check it out, kinda old), etc?
Remind me again of what's so wonderful about what he's done?
I will do a breakdown on the bullshit of MacManaus

So, is it bullshit that he

1) associated with the clintons,
2) <associated with> epstein,
3) uses outsourcing too,
4) has been bankrupt to the tune of billions, requiring american taxpayers to bail him out,
5) had rothschild accountants for him (article is on forbes if you wanna check it out, kinda old),
6) etc?
7) Remind me again of what's so wonderful about what he's done?

stock here--so the sociopathic stylized argument is attempting to ask me to, goad me into "refute some of those things that I mentioned.

Commentary on 1 and 2
I have seen him in pictures with Clintons, they are the powers that be, I would expect them to cross paths, even do deals together.    What is your point?  Especially in regards to how he has performed as President, his ideas for future improvements, his fitness to be president?    Those are the real issues.   Epstein does look pretty dirty.    But the "claim" there that matters is that Epstein and Trump raped a 13 year old girl at Epsteins place in 1994.   Rape claim filed on April 26, 2016 by Katie Johnson she was apparently living in a foreclosed house where someone had recently died.
Trump announced his run for president on June 16, 2015
On April 5, 2016 Trump did well in the Wisconsin Primary, Wisconsin was already seen as a crucial state by the Republican party.   Cruz took Wisconsin and caught up a bit, but Trump was still in the lead.    As an aside it was amazing that Hillary, who hated common people directly per Podesta, refused to campaign Wisconsin hard...courting the Cheeseheads was beneath her.
On April 19th, 2016 Trump win the New York primary.   This must have panicked the Democrats something awful.
On April 26 2016  TRUMP SWEPT ALL 5 STATES.  One of the biggest primaries races were held:26 April: Connecticut, Delaware, Maryland, Pennsylvania, Rhode Island Primaries
April 26, Rape claims, after 22 years were filed against Trump.    It is curious that after 22 years, these charges are finally filed, just 7 days after the Trump win in super Liberal/Democratic New York.
Here is a more expansive timeline of his campaign
http://people.com/politics/donald-trump-timeline-to-presidential-nomination/
Commentary on 3
"Trump uses outsourcing"
Indeed, it is legal, why not use it when it make economic sense?    But it does take money that could go to US workers and businesses.   I have used outsourcing, getting Philippine engineering support for 1/3 what it costs in Hawaii.    But if the law is structured to make it less profitable to outsource, then the rules of engagement are changed, and America is protected from economic loss.   So that is the answer...NOT lambasting a sound and fully legal business decision.

Commentary on 4
has been bankrupt to the tune of billions, requiring american taxpayers to bail him out,
I won't argue that Trump's businesses haven't declared bankruptcy several times.    There is a law in the USA that encourages people to build businesses and build job, by taking risks.   The bankruptcy law is designed to encourage growth by allowing an entity, to go under, without taking the person "under".    The "taxpayer to bail him out" thing is fake news, bullshit, made up lies.    Trumps use of the tax law related to short term capital gains and losses and long term capital gains and losses is very basic in the business world.    You don't even need to declare bankruptcy to use the "benefits" of a loss.   I have used both both short term and long term capital losses to offset future income, it gives an even better incentive to work hard to make up what you lost.    It is not some "brilliant tax move that the Donald used to game the system" as the biased media tried to frame it as.    It is very basic and fair and legal.
Commentary on 5
had rothschild accountants for him (article is on forbes if you wanna check it out, kinda old)
Sure we know that overall the whole Rothschild family is pretty evil, pretty corrupt and openly pushing us towards a one world government, where they can sell all their products including financial products, no matter how crappy or dangerous, any where and any time.

That said, what is your point about Trump using their accounting firm?
Commentary on 6
etc?
My response, LOL
Commentary on 7
Remind me again of what's so wonderful about what he's done?
Again it the annoying phrasing that you use, that makes it impractical to rebut or respond.    Your vague assertions make it much harder to respond, because to respond, you put the burden on the responder to handle all cases.   Intentional or not, it is a diservice to those you are discussing with.   A little bit of care and clarity would go a long way, but you don't give a rip about that.    The question is WHEN??? When is the key issue.   You mean before he became President?    Well I think we covered that above.    Or do you mean after he has become President, because that is where we are at and our actions in the present are what matter most.
Posted by Stock at 10:46 AM