Owned and Controlled Media In A Full On War Against Truth, Desperate Attempt To Establish One World Government

stock here: to anyone paying attention, it should be beyond obvious that the super rich have bought up almost every major media source, as well as social media and are using those as tools of propaganda to sway the world into their iron fist control.

First off: Screw them

The sacking of Bill O'Reilly....on Fox news, one of the few news outlets that still reported fairly.
Bill was made an example of.    Bill may not be "Lily white" but this was an obvious contrived sack aimed at eliminating people who produce true news.

Another Author saw that scenario, and is also predicting that Hannity will also get "sacked" on some, pun fully intended, Trumped up charges.

Horowitz says the recent media hit job on Bill O’Reilly was nothing less than “cold-blooded murder” by liberal outlets that desperately want to stop Donald Trump.
“I predicted all this in my book ‘Big Agenda,’” Horowitz says. “The CNNs of the world hate Trump, but they know they have to kill off his few media allies like O’Reilly and Hannity first.”

They are selling the Newsmax magazine along with said free book, you can review it here if you wish.    No financial incentive for me, FYI.

Let no crisis go to waste.   So people have been doing gang rapes and killing themselves and others on social media.   And these things go on or stay up on social media for HOURS.   Simple enough methinks to have maybe 8 people receive "reports" and then quickly decide, in minutes to remove content. 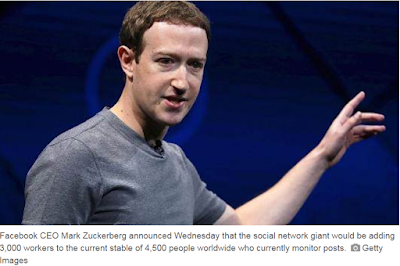 Zuckerberg....as evil as they get....is hiring 3000 under the guise of eliminating this sort of thing.    It should be totally obvious, that it is not about that, but about censorship of content that doesn't fit the party line.

Some say he is positioning for a run for president.   God save us.   Because at that point, as the old Meatloaf song goes "I'll be praying for the end of time, hurry up man alive!"

ABC, NBC, CBC are so blatantly NWO Establishment, that it is almost disgusting just to read their headlines.

"They" are desperate, and desperate organizations are dangerous.

Alaska was hard hit by Fukushima.   The ocean life increased in radiation by the same amount as a direct nuclear bomb test, due to Fukushima.   Hard to believe?    This is from the official government reports.    They did another run of tests in 2016, no word on when results will be released.

So if the damage to Alaska gets out into general public knowledge, it will be harder for them to keep covering up Fukushima.   And covering up their cover up, and the damage it has caused.   So the solution?

I am not "Anti Jew", but any fair and balanced view makes it OBVIOUS that the "worst actors" in the world are primarily Jewish.


Cool, another effing philanthropist, creating policy through non profits while his Jewish butt buddies get tax breaks and control the narrative.    Poor guy and his ilk are just so persecuted.

University of Chicago Law.....imagine that.   Now we is funding that Law School so that 10% of all lawyers graduating with have a full ride covered by Rubenstein, and thus be called Rubenstein scholars.

And just a coincidence....but he is spending $20M to play the "slave card" for a long time
In April 2013 and 2015, he donated a total of $20 million[30] to the Thomas Jefferson Foundation, which will be used to rebuild at least two buildings in the slave community on Mulberry Row at Monticello.
He says “"I think it's important to tell people the good and the bad of American history, not only the things that we might like to hear." [31]
(referring to his wanting to put a face on slavery using his donation to rebuild slave quarters at Monticello)”

He is also funding the “Institute for Advanced Studies” to make sure that influence can be exerted on truly our best and brightest.    One of their studies is “Mathematical  and Theoretical Biology” so maybe I will quiz then on radio-isotope concentration factors in Chitin.   It should be noted that Albert Einstein studied here, as well as John von Neumann
”During World War II Neumann worked on the Manhattan Project, developing the mathematical models behind the explosive lenses used in the implosion-type nuclear weapon. After the war, he served on the General Advisory Committee of the United States Atomic Energy Commission, and later as one of its commissioners.”
Also studying at IAS was Joseph Godel:
Albert Einstein was also living at Princeton during this time. Gödel and Einstein developed a strong friendship, and were known to take long walks together to and from the Institute for Advanced Study. The nature of their conversations was a mystery to the other Institute members. Economist Oskar Morgenstern recounts that toward the end of his life Einstein confided that his "own work no longer meant much, that he came to the Institute merely ... to have the privilege of walking home with Gödel".[18]

Finally, his wife Alice Rogoff, who had worked for the Washington Post, a bastion of fake news, decided to purchase the largest Newspaper is Alaska in 2014 (Anchorage Daily News) as the Unusual Mortality Events started becoming obvious.

Rogoff hosted Barack Obama in her Anchorage home in 2015 when Obama made his infamous trip to Alaska to promote wealth transfer through “carbon taxes” in order to fight “Global Warming”.

Alice was the pilot of a Cessna 206 float plane, heading to a party in a small town.    She hit a tree on the landing approach, even though the entire Cove was available to land on.   The damage was severe with one wing bent at 90 degrees, and she crashed into the ocean.    Rather than stay in the accident area to talk to authorities, she was whisked away by “private parties” and when the troopers arrived there was no one there.   That was Sunday, the troopers did not go talk to her in this town of 72 people in which obviously everyone would know where she was.   Instead they punted to the NTSB

Even before the NTSB had done any investigation, they stated “A crash without serious injury and a healthy pilot, Johnson said, usually would call for a limited investigation.
“Typically we won’t launch on these,” he said. The NTSB instead receives a majority of its information for the investigation from the pilot.”
He stated that they hoped to talk to her in 2 or 3 days.    Ah yes, benefits of power and privledge and control of the media.     I mean after all it would just be a conspiracy theory to think that she was obviously drunk, going to a party, and the troopers just shrugged it off.    Even though she was a single passenger/pilot, these types of actions could be a grave risk to others in the future.
http://www.seattletimes.com/seattle-news/transportation/alaska-newspaper-publisher-survives-floatplane-crash/

Finally, in classic Jewish tradition:
"The only game in Washington is the Fed." [62]
(at the Aspen Institute, 2013)