Indeed, nearly every media accusation against Trump has been based on nothing but innuendo, misleading headlines, fake “anonymous sources” (a Washington Post favorite) or outright misrepresentations of hard facts. The New York Times and Washington Post have deliberately published fake news, then whipped it all into a “media circle jerk” frenzy where the same false stories are repeated across the ‘net, all hyped up by Facebook’s selective oppression of liberty-oriented news so that left-wing media lies are more easily shared.


https://www.youtube.com/watch?v=PpbM0ZXptkw
On your video posted above, "if we tolerate this"….

I would further that it is not just our children we have to be concerned about…but ourselves. You know as well as I that the battle drums beat hard for complete worldwide jack boot control, by the Bilderberg assholes that have been working on it for 40 years….Soros, Rotchilds, et al.

Also the meme of "most dangerous thing is ignorance", I disagree.

The tools of the internet as a means to instantly assess the effects of the controlled media propaganda is very strongly in the NWO and just plain evil people's favor. Even non-ignorant people cannot stand up to a continual onslaught of propaganda.

People in my life that I love deeply are in this trap and even with my best efforts I cannot get them to open their eyes, many of them are plus 50 and plus 70. The 50 somethings have in their mind nearing the end of their lives (sad since I am 53 and my actuarial table predicts an average life of 98 for me). The 70 plus cloud is glad to get 10 to 15 years…they don't want to open their eyes much, and certainly they are not ready to take up armed resistance.

The reality is that those with means, those with much to lose, are unlikely to get past being pacifists.

Those without means are struggling so much it is difficult to organize. Hence the massive increase in food stamp handouts and government housing…basically to prevent mass protests and even revolution.   It is a "safety net", for many criminals at the top.

We see these blatant criminal activities at the top, that are never prosecuted.   Top politicians know that in the current system, that they too must undertake actions that if fully exposed, would be clearly illegal.

Not to mention now that with the blatant deep penetrating espionage by the NSA et al, there would be very few not subject to full on blackmail if they don't tow the establishment line.   For the few with integrity of sorts, they can often be captured with a "honeypot" a sexual setup.

This is the level the game is being played at.   So although we can educate on crucial issues like radiation and the danger of the nuclear industry, until we can get back to some semblance of fairness, justice, rule of law, and stopping insanely anti-constitutional invasions into our privacy, I think little substantive value will be accomplished.

They are so desperate after losing the presidential race with their intensely flawed candidate, Hillary Clinton.     I think they want to run her again, amazingly.    So desperate that they have played the "Russia card" and then antagonize to the point of risking nuclear war.

Even Putin has come out as saying that American "politics" (without directly calling out the Establishment liberal Democrats AND many Establishment Republicans) as Crazy.   His words were translated as schizophrenic.

Professor Cohen Says Assault on Trump Presidency is Our Greatest National Security Threat: Is There A 4th Branch of Government?

A short eye-opening chat at the beginning of this podcast with a major whistleblower - A Dennis Montgomery interview:

Then we have ((( them ))) OTHER cut-throat thieving control freak pirates that like to blackmail and extort their will on all the other pirates.

Notice who isn't on the pirate list fucking up the USSA government?

Live Hard, Face It, There Are A Lot Of Pirates In Control Of 'Our' Government And 'We The People' Are The Hostages, Die Free
~DC v5.0 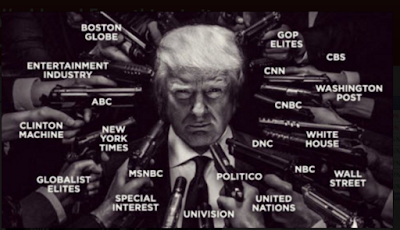 from one of the handful of blogs that I follow---Funny he is writing this the same day I decided to
spell out the obvious.


The World and Everything in It War on Trump

The real war is not between the Republicans and Democrats, or even Conservatives and Progressives. It’s not black v. white, or Illegals v. Americans.

THE REAL WAR----
It’s between the Political class and the People of our country. The Political class doesn’t want any of us anywhere near the levers of “their” power, and will stop at nothing to stop non-politicians from getting a foothold in Washington, DC.

I saw subtle symptoms of this when I worked in the Washington media. I did mornings on a major radio station there, and when I first moved inside the beltway, lived in Arlington, Virginia, a short drive across the Key Bridge into the District. I would fly back to my previous home for the weekend every couple weeks until my then-fiance followed me. I remember having to hump my bags in from parking at National Airport (now Reagan, International), across an almost always virtually empty parking lot WITH a guard 24/7. I asked about it once, and was told it was for members of Congress, and was right next to the terminal. I never saw more than one or two cars parked there, a completely empty, lined slab of concrete I wasn’t allowed to park in. Over the years, I would see COUNTLESS examples of this sort of thing. All of it set up to make Congress’ life as easy as possible. Screw the rest of us.

Trump is that crazy-ass soldier who stands up, charges the line and flops down on the barbed wire, so the rest of the unit can follow, undeterred by the wire. The only way we get our country back is to follow him and charge the enemy, who is concentrating all their fire on him to keep anyone from following him against them. If we stand back and don’t follow, we sacrifice the brave crazy guy and lose the battle, which by the way, means we lose the war, because we won’t find another crazy-ass natural leader to lay down on that barbed wire if we let this sacrifice himself for nothing.

Remember: The war is US versus the POLITICAL CLASS. We have to get our kind elected, and open the supply roads to bring in more like us. It’s the only way we win.

Our Founding Fathers did not set the country up to be run by professional politicians. They expected local farmers, merchants, businessmen, etc. to go to Washington for a term or two and then stand aside. All continuity was to be supplied by the Senate. Why else would they set up a system that involved Congressional elections every two years? Think about how difficult it was to travel long distances in the 18th Century. There was a reason a new Congress was called every two years. It was supposed to be mostly made up of new members.

Whether or not you fully support Donald Trump, don’t waste this guy who is laying across the barbed wire.

Run for office. If that’s not you, work as a volunteer for someone you believe in and help them get elected.