Lies From the Nuclear Cartel, Using Mass Media To Try to Control the Narrative of Safety

We know that nuclear is sloppy and not safe at any level.   And so the nuclear cartel attempts to control the narrative by publishing the exact opposite of the truth.

1) Forbes is publishing an article trying to convince people that there is no need to worry about the nuclear spent fuel pools all over the country (and world for that matter). 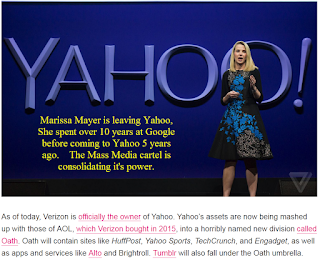 As an aside, I noted that the consolidation of "power" within mass media continues.   Break up the big banks, sure, I guess even
Trump is not comfortable with floating the idea of breaking up "Big Media".    Noted this week as I tried to get my Samsung Android phone on a Verizon service working, I backed up my contacts, and found that Verizon was not linked at the hip with Google Cloud.    Yep, all your data and contacts now belongs to "them".    Verizon also bought AOL in 2015

Then just yesterday, Verizon bought out Yahoo which also owns flickr.    Yep, all your emails and pictures now belongs to "them".

In truly Orwellian fashion, Verizon has named its new division "Oath" somehow trying to imply honesty and steadfastness in their twisted group that also includes Huffpost.

When "Science" magazine came out with a critical review of our nations spent fuel pools, the cartel needed to bring out the big guns and use Forbes as a mouthpiece for their propaganda.
http://science.sciencemag.org/content/356/6340/808 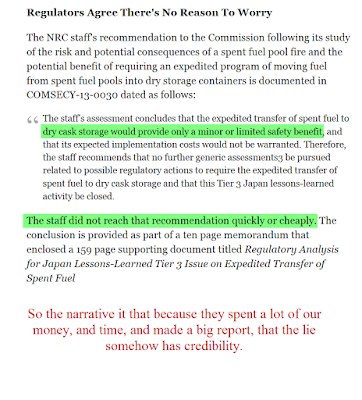 So Forbes brings out Rod Adams, a true believer, who might even believe his own lies.   Rod uses the classic lie of trying to pretend that the only dangerous things in radiation is Cesium, ignoring Strontium and Plutonium which, among others, are far more dangerous than Cesium.

Here is a write-up I did on why strontium is so dangerous, and an article on the extremely long biological half life of strontium means it sticks with you until it kills you (330 years).
https://nukeprofessional.blogspot.com/2013/03/strontium-bogeyman-exists-wicked-one.html
https://nukeprofessional.blogspot.com/2014/11/resource-spreadsheet-strontium.html

“Seventy new micro-cracks have been discovered in the high-pressure boiler at the aging Tihange 2 nuclear reactor in Belgium, since the last inspection in 2014.

Experts using ultrasonic technology found the new cracks after positioning the camera in a different direction . . . “
What’s with this “micro-crack” fig leaf? Since th contamination threat is atom sized and the crack isn’t sub-atomic it can’t be called a micro-crack. It’s a crack. 70 cracks.