The troll degradation/takeover of ENE proceeds.   Logged in Monday morning to review troll status, and indeed in the right side bar, 9 of 10 of the latest comments were from ManAnus.   See long image on right here.

Alternative News and Activist websites have been targeted by corporate and governmental organization for a long time.

They send "trolls" to screw up the conversations, to confuse, dilute, disgust.

I'd vote, if I had a vote, to BAN the subversive entity(s).
I keep clicking Report Comment, but alas, it seems useless.

I remember the days when people left interesting 'comments' here regarding the actual article posted, not just senseless jabber or links to somewhere else without an explanation.

Alarming mass die-off on California beaches
— “How many have to die before somebody cares?”

The comment below was in response to my assertation that I was going to write this article documenting the troll tactics.   The image on the right is from an online comment that DUDe found, so in case I get a foreign object stuck in my eagle eye, you know who to look for. 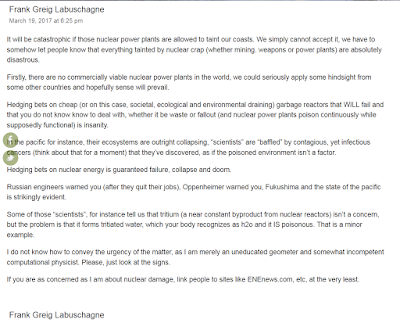 June 16, 2017 at 12:10 am · Reply
Drop your stupid neanderthal attempts of power, control and will, okay?
Lift the burden off her shoulders.

June 13, 2017 at 5:06 pm · Reply
stock will be pleased to know, no doubt, that at an abusive muslim institution I'm kinda related to, some crazy africans ran in there and started destroying shit.

June 11, 2017 at 6:34 am · Reply
Let's spend our time fighting and killing each other, raping the earth, abusing animals and generally fuck up absolutely everything we rely on. Sounds good? Just remember to find a scapegoat or two.

Farthington MacMananus
June 11, 2017 at 7:06 am · Reply
Maybe I posted the wrong version there, just to throw you off. But basically, go do a search for something called GJK and EPA. Now those are STILL considered state of the art. Yeah, and I'm dumb.

Farthington MacMananus
June 11, 2017 at 7:56 am · Reply
And, before I get some more bullshit accusations about being a narcissist or whatever. You did accuse me of some things, you are ignorant, you are a piece of shit, Guppy Dick. You figured I wasn't going to reply?

June 11, 2017 at 8:26 am · Reply
You reckon so? Are you suggesting I submit, you know I can't do that right?
frontier space pioneer – commander of the secret elite mercenary wing of the freelance alliance – the prequel to the sequel limited collector's special edition
Once upon a time in garaxy fall away…
Now…time has become.
SUPPLIES! FIGHT! VICTOLY!

June 11, 2017 at 9:07 am · Reply
I watched a few minutes' video of Kevin B with a fishing rod, and now I see an ad above about 'sport fishing adventures'. IMO this site might be owned by google.

June 10, 2017 at 10:18 am
I tend to avoid books, a que from Pythagoras and Socrates, perhaps.
I did go to school and it's like, well shit, most of these books are riddled by snakes. Especially the ones talking about history.

June 10, 2017 at 10:32 am
This is why I listen to death metal and black metal. Something honest, truthful and not quite as disturbing as the horrifying distractions.
Like that time you doze off in front of your TV while you're being programmed by CNN or FOX "news". You wake the fuck up and it's like "Fuck, who let me watch this shit?"
Farthington MacMananus

June 10, 2017 at 2:22 pm
Seriously, now I'm supposed to defend PT against stock? jesus this is tiring. stock, you're a piece of shit.
Farthington MacMananus

June 10, 2017 at 8:04 am · Reply
Here I am with my younger brother, working on a precursor model.
http://www.raffaelloindri.com/wp-content/uploads/bfi_thumb/FR-FOTO-WEB-2-2yhsorqgcc3qnsjg5l3gn4.jpg
Savvy?

June 9, 2017 at 5:23 pm · Reply
Shit, I made a typing error (which of course I never do), I missed a whole word there. Wouldn't be the first time but hey, people aren't very observant and/or entirely full of shit.
It's so strange that I find it easier to convince people that lies are truth, they'll fucking believe anything. That's some real twilight zone stuff.
Farthington MacMananus

June 9, 2017 at 6:58 pm · Reply
"but he didnt use the half step modulated mixolydian mode of the ostinato."
The what? Phrygian, stygian, mixolydian, midichlorians and fucking 7th and shit, the fuck are you talking about? I'm a simple man, I like tremolo and d-beat.
Farthington MacMananus

May 21, 2017 at 7:43 pm · Reply
A bit unrelated but…
In 2014/2015 (I can't remember), she (iirc) had a video of some very bizarre reactions/phenomena at FD. It almost looked like a nuclear radiating creature, I showed that video to other people and they were freaked out.
Dunno if you've seen it, but at the time there seemed to be fires too.

Farthington MacMananus
June 13, 2017 at 5:13 pm · Reply
You had to get someone else to taze you though?
I didn't bother with delegation, played with some electric fences, got myself a 5.5 million volt stun gun. Fun times.

June 13, 2017 at 5:34 pm
I've a pretty bad cyst (for maybe 15 years now), which I *think* is the result of poisons from abscesses being isolated and encapsulated. Biopsy? No way man.
Still thinking some lasers could help with that, not that it matters.
Farthington MacMananus

June 13, 2017 at 5:24 pm · Reply
Yeah but what about all the other nuke tests, the corroding nuke waste barrels a few dozen miles off the american coast, the combined pollutants, etc?
I don't think I could be a marine biologist, mainly because I don't fucking like asshole

June 13, 2017 at 6:07 pm
Dazy, the problem is, something like weed doesn't just have chimaeric spores that turn into opportunistic pathogens easily transmitted in the atmosphere, vs say, fungus (in fact, more prevalent at higher altitude).
Otoh, I do enjoy fungus killing itself as it produces alcohol.

Farthington MacMananus
June 13, 2017 at 6:09 pm
Also, that fungus is very pathogenic already. It may even bioaccumulate pathogens, particularly in poisonous environment.
Though I wouldn't argue plants do the same. But if I compare the mutability of fungis vs those plants…it's kinda easier to notice the shit.
Farthington MacMananus

June 13, 2017 at 6:15 pm
Watch out for trends, before you know it, you'll be homogenized and pasteurized.
Narrowing your choices? Ouch. Soon, you won't have any choice.

Farthington MacMananus
June 15, 2017 at 6:00 pm · Reply
DUDe, a guy like Sanders appeals for more government, delegation. Helfeld poses simple questions, much like Socrates (your father of science, btw) did, yet was demonized. Therein lies the contradiction.
Where do you think he (Sanders) got his money and support? Would you like to mention that he conveniently turned to partisanship in support of clinton?

Farthington MacMananus
June 15, 2017 at 6:01 pm · Reply
Politicians bro, why bother trusting them? The only thing they're useful for is fodder.

Farthington MacMananus
June 15, 2017 at 6:03 pm · Reply
Just think how cool it would be if could pit them against each other, a couple of thousand clowns, devoid of honesty.

June 15, 2017 at 6:56 pm · Reply
"..Would you like to mention that he conveniently turned to partisanship in support of clinton?.."
Oh i know.. we dont know how volunteer it was tho..and i doubt it was..paid or not..
"..Politicians bro, why bother trusting them? The only thing they're useful for is fodder.."
Why stop there with the mistrust..99% (imo) of the people don't even know themselves..conscious does not know subconscious..every relationship is a compromise..

Farthington MacMananus
June 15, 2017 at 7:20 pm · Reply
I know this country is horrible, mainly because of typical polarizing bullshit.
Did you know much of what influences this country also influences your country, and that america projects significant insecurity?

Farthington MacMananus
June 14, 2017 at 3:31 pm · Reply
All the music promotion companies.
I just appreciate music and I think a lot of it is under-appreciated, sue me.

CodeShutdown
June 14, 2017 at 3:41 pm · Reply
Farth, no it was a serious question. Those bands spend 20k, 30k for an indie disk, and much more for all the other band stuff, then they have to promote it. You go to a promotion company and they charge you 1000 a month to get the music out in front of the public. And so those companies embed shills in public forums to push music, and thats how its done. Gotta get a tour going, some TV spots and work on your death metal image…T-shirts. Everything is business in this sad world of men. And somehow you can afford several liters of wine per day…so

Farthington MacMananus
June 14, 2017 at 3:53 pm · Reply
And it was a serious answer. Except for the first line. Maybe.
I can't afford to buy anything, because I don't work, I'm broken like that.
So these songs I've been posting, most of them have been kind of unpopular, some even free albums. What the fuck, it's appreciation.

CodeShutdown
June 14, 2017 at 5:11 pm · Reply
Its OK Farth, I enjoyed some of it. On one song I was at once transported to a peak of depraved indignation, as if I had suffered years in the torture chamber of a medieval dungeon, and finally my rage was unleashed and propelled as projectile bilious vomit by the staccato double pedal bass onto the walls and any person or animal in between. Having been beaten down to subhuman shreds of sinew, I wondered where this energy came from…almost as if the rage itself was a force inhabiting my body, coursing through my flayed nervous system like a dark spirit awakened by an exorcism. The dichotomy of wretched debasement and virtuoso musical performance stretched my feeble awareness to the breaking point. A fuse…burned out in the machinations of a technological Juggernaut that demands more than humanly possible yet drags all beings with it to hell. At the end, I ripped out the picc line that was feeding acidic drugs into my system to enhance the death metal experience and staggered into the kitchen in search of hard liquor. Water would only make me vomit. I considered listening again but then I would have to kill myself and that might affect my relationships. I loved it.
so in the end…is it yes or no…you are paid to expose music online or not?

CodeShutdown
June 14, 2017 at 5:36 pm · Reply
who takes care of lion cubs? Just curious. Somebody has some serious muscles too