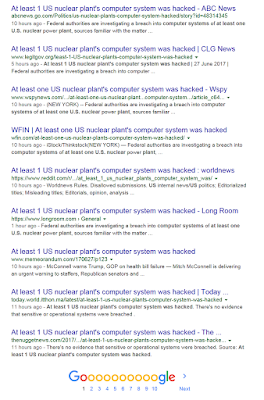 NOTE: added to bottom, new information about Entergy's "Nuclear 17" the NRC nickname for a particular and recent hack.   Of course there was no immediate threat to the public.   And why are we up to "17"?

Federal authorities are investigating a breach into computer systems of at least one U.S. nuclear power plant, sources familiar with the matter tell ABC News.

One U.S. official called this an "ongoing matter" that is still being investigated. No public word has been given on who may be responsible, but authorities are looking at the possibility that a nation-state may be behind the hack.

Funny how these "Government Officials" are now never even named.    As if there would have to be some justification for remaining an anonymous source in a case like this?

"In this [Black Hat] talk, I'm going to try to explain how to reverse-engineer an entire radio protocol, from physical to application layer," he says.
An attacker could wage a cyberattack on these devices as far away as 20 kilometers, he says. "You don't need to be near the facility to attack it," Santamarta says. And there are plenty of tools available for an attacker to jump onto the RF network. "The problem with radio is it's difficult to mitigate" an attack via it, he says.
The weak RF protocols and firmware could allow an attacker to inject fake radiation readings, so that if there were a radiation accident or leak, it couldn't be detected, for example. Or the reverse: it could send phony readings of high radiation levels when none were actually present, he says.

A German nuclear plant suffered a disruptive cyber attack, the news was publicly confirmed by the IAEA Director Yukiya Amano.

and here is another one were they achieved in placing malware on a non-internet connected computer network that controlled movement of spent fuel...


Gundremmingen officials said the IT system was not connected to the Internet and that the virus may have been carried into the network on a USB an employee used on his office or home computer, which would be the real source of the contamination.
The virus that was discovered in the system at the Gundremmingen nuclear plant was used to load and unload nuclear fuel from the power plant’s Block B and then transfer old fuel to the warehouse. 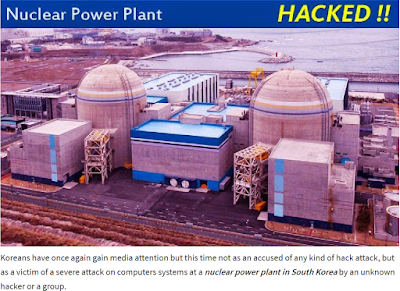 And in South Korea, hackers got into the computer systems of a nuclear plant stole, note this "other internal information about the plant".

The spin on the story is that is just focused on blueprints, which is bad enough, but pretended that it was the blueprints that were the most important thing, and that the hackers "threatened to release more blueprints."

The cyber attack came into light after a hacker posted blueprints of nuclear reactors online and threatened further "leaks" unless authorities close down the reactors. According to the South Korean Yonhap News Agency, the hacker was able to access blueprints of reactors, floor maps and other internal information on the plant.


U.S. authorities are investigating a cyber intrusion affecting multiple nuclear power generation sites this year, E&E News has learned.
There is no evidence that the nuclear energy industry's highly regulated safety systems were compromised. But any cybersecurity breach — targeted or not — at closely guarded U.S. nuclear reactors marks an escalation of hackers' probes into U.S. critical infrastructure.
Electricity-sector officials confirmed yesterday that they are working to unpack the significance of the secretive cyber event, code named "Nuclear 17."
Asked about the case, a representative from the North American Electric Reliability Corp. (NERC) said the nonprofit grid overseer "is aware of an incident" and has shared information with its members through a secure portal.
U.S. energy utilities pass around information on the latest hacking threats and vulnerabilities through NERC's Electricity Information Sharing and Analysis Center. That organization "is working closely with the government to better understand any implications this incident might have for the electricity industry," NERC spokeswoman Kimberly Mielcarek said in an emailed statement.

stock here, ya PlowboyGrownUp, I remember that article where he assured everyone that Nuclear Plants are ANALOG.   And he trotted out these full on lies:

The hackers can be forgiven for not knowing that nuclear plant operations and safety systems at nuclear plants are still analog, just like in the United States. The only systems that are digital, and connected to the internet, are administrative things like personnel files, procedures, e-mails, and environmental and other data acquisition, displaying and reporting.

The cyber attack came into light after a hacker posted blueprints of nuclear reactors online and threatened further "leaks" unless authorities close down the reactors. According to the South Korean Yonhap News Agency, the hacker was able to access blueprints of reactors, floor maps and other internal information on the plant.