Some have speculated that the US Navy is intentionally trying to sink these ships that they cannot decontaminate.

It sure is statistically improbable that this is just coincident.

I suggest the cognitive abilities are affected by long term exposure to radiation, and this is increasing rate of accidents.

also noted the this new accident, the John McCain, had just challenged China last week by sailing close to one of China's newly built military islands.


On June 17, the USS Fitzgerald collided with a container ship off the coast of Japan. That collision resulted in the deaths of seven US sailors. The Fitzgerald will be transported to the US for repairs.
On May 9, the guided-missile cruiser USS Lake Champlain was struck by a small fishing boat off the Korean Peninsula.
And in late January, the guided-missile cruiser USS Antietam ran aground while trying to anchor in Tokyo Bay. Authorities at Yokosuka Naval Base said the Antietam remains out of action.
The official contingent of Operation Tomodachi,    The US Navy participation in radiation polluted air and water off of Fukushima immediately after the Triple Melt Down.

stock here -- in a quick internet search, I could not find evidence that Lake Champlain or Antietam participating directly in Tomodachii, Although all 4 ships with accidents were reported to have been based at Yokosuka Japan.

A summary of Destroyers in Japan, Fukushima, and Accidents

Carl Schuster, a former director of operations at the US Pacific Command's Joint Intelligence Center, said the oil tanker would have been at least three times bigger than the USS John S. McCain.
"Oil tankers are huge and it takes miles for them to change course," he said.
"When you're going into a congested channel, you're supposed to be very alert, track ships around you to a very meticulous degree."
The Malacca Strait, which runs between Indonesia, Malaysia and Singapore, is the world's second busiest waterway according to the World Economic Forum. The collision took place in waters to the east of the Malacca Strait, US authorities said.
At a press conference Monday afternoon, Malaysian authorities said both ships were heading toward Singapore from the South China Sea when the collision occurred. They described the area as very busy, with some 80,000 ships passing through it every year.
Both ships should have reported in to what the Malaysian authorities called a maritime "traffic separation scheme," essentially air traffic control for ships. 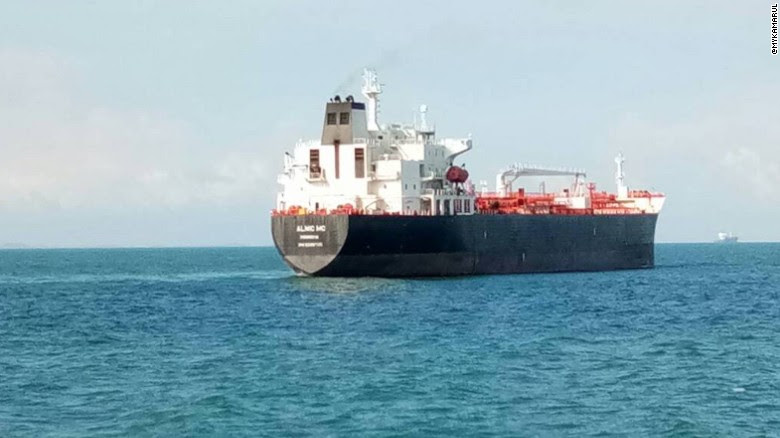 The tanker Alnic MC
Francona said no matter what the tanker did, the faster, more-nimble US destroyer should have been able to avoid a collision.
"How does a state-of-the-art Navy destroyer equipped with multiple radar systems and communications gear with a full bridge watch not see, detect and evade a 30,000 ton slow-moving (10 knots) behemoth?" Francona asked.

A US Navy official told CNN the McCain had experienced a loss of steering before the collision, but that steering had been regained.
Merchant marine websites describe the Alnic MC as a 30,000-ton, 600-foot-long oil tanker flying a Liberian flag.
The Maritime and Port Authority of Singapore said the Alnic sustained damage to a tank at its bow, about seven meters (23 feet) above the waterline. No one was injured on the tanker, it said, and no oil spill was reported.
The McCain is named for the father and grandfather of US Sen. John McCain. Both of McCain's relatives were US Navy admirals. The senator was a captain in the US Navy.
The vessel is 505 feet long and displaces about 9,000 tons.
CNN's Yazhou Sun, Elaine Ly, Marc Lourdes, Sandi Sidhu, Jim Sciutto and Ryan Browne contributed to this report

Guess what the USS Fitzgerald and the USS Mcstain have in common????? Anybody anybody????
They were both part of operation Tomodachi. Coincidense????
Google US navy aims to sink radioactive fleet and see if you can connect the dots.