The article and a good rebuttal are included, as well as names of 6 of the so called 27 experts.   I am hoping people can put in a half hour or so and dig deeper for more of the authors or for specific links on authors to show their background and actions.

stock adding:  The 100% Liberal group of "professionals" who wrote a book detailing Trump's supposed many mental illnesses (which comes out OCT 3) are pretending that the Duty to Warn applies to the Trump situation, which clearly it doesn't.    They are attempting scoot around the Goldwater Rule, and methinks setting themselves up for a libel or defamation lawsuit or being debarred professional or university affiliations.

Consider this.   America is now down trodden with mental illness, way over medicated with dangerous stuff that sometimes helps depression, but we also find that mass murderers are very commonly on psychiatric drugs.

And the whole "Mental Health" industry is OK with this.   Turns a blind eye to it, participates in it, is complicit with the Pharmaceutical industry.    To call most of them "experts" when this obvious huge grievous disservice to the public is being foisted on them, is an insult to "science".

But per the snippets we are allowed to see, they are going to, from afar, diagnose the President of the
United States, Trump, as
Those are some strong words.    Let's see what they really mean, at the bottom of this article.

stock here: There are battle lines drawn.   It's the recent 4 decades old push by the Globalists, the Zionists (mostly Jews) who have needed to weaken America and Europe, in order to roll out a One World Government that is much stronger than the UN, even though they use the UN for current purposes.

Lots of smart and caring people get sucked into the diatribe, too.    A pre-disposition to lean one way in thinking, was co-opted by the Globalist cause, and manipulated into a tool to further the Centralized World Government control scheme.

So when I saw promotion of this book coming out in October 3, I figured it would be worth a little expert to look into these "Experts" and see what their backgrounds were.   It was funny that it took little more than 30 minutes to get a pretty clear view and trend.

It's a "Liberal" thing.    The Liberal "cause" has been co-opted by the Globalists that be.    The liberals don't realize their role in multi-point strategy to bring America to it's knees, to eliminate the Constitution, and the resilient, morally grounded, Christian middle class, at least eliminate their financial stability and overall opportunity for action.


But right after the book quote below I want to show some critiques of the article (highlighted in red), which were nicely done and eliminated a lot of work that I would have had to do.


Philip Zimbardo and Rosemary Sword, for instance, explain Trump’s impulsivity in terms of “unbridled and extreme present hedonism.” Craig Malkin writes on pathological narcissism and politics as a lethal mix. Gail Sheehy, on a lack of trust that exceeds paranoia. Lance Dodes, on sociopathy. Robert Jay Lifton, on the “malignant normality” that can set in everyday life if psychiatrists do not speak up.

His madness is catching, too. From the trauma people have experienced under the Trump administration to the cult-like characteristics of his followers, he has created unprecedented mental health consequences across our nation and beyond.

A critique of the article come from many commenters.    But  this short summary with a linked
extended rebuttal caught my eye.  This is a comment on the Independent Whig.

Here is a supposed justification on why psychology is so heavily "liberal".

And here is the full "debunk" if you wish to accept that word, related to the image snippet above.

Robert J Lifton was a key constructor, Bandy X. Lee is called the editor or author. 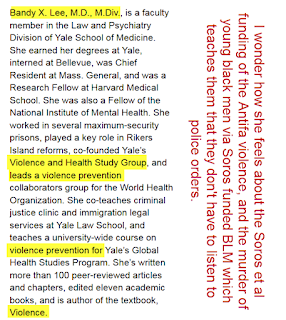 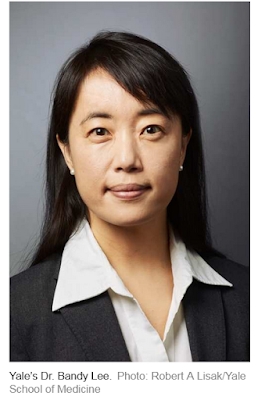 The head author, or editor, Bandy Lee, has one other book I could find.   Her "expertise" in diagnosis mental disorders doesn't seem supported by this other book


---- Beginning with a powerful essay on the individually and globally therapeutic qualities of art and beauty by Elaine Scarry of Harvard University, this volume brings together a diversity of theoretically minded scholars, scientists, artists, and healers. In the form of critical and reflective essays, alongside images, poetry, and fiction, this book allows the reader to experience the bursts of ideas and sensory triggers that respond to and extend the artistic installations and performances of the colloquium – and welcomes the reader into the conversation.

It seems a bit extreme to have an expert expressing a psychoological opinion to also talk like this, as she does

Thank you! Senator Durbin we need your and Senator Duckworth's leadership now more than ever...please band together with your fellow congress people who care more about our country than their party to impeach this unstable, impulsive, thinks he's above the law, man in the white house...please!

Jennifer, the laws are already on the books, they are simply being enforced finally.
Like · React · Report · Jan 30

Mark Doering the laws stating that the president has no checks and balances? Thanks for the mansplaining but I don't think so...
Like · React · Report · Jan 30

Their leadership hasn't done much to help the state of Illinois recently, so keep praising their effort!
Like · React · Report · Jan 31

Marc Sweda we are talking about issues that are impacting the entire country here...
Like · React · Report · Jan 31 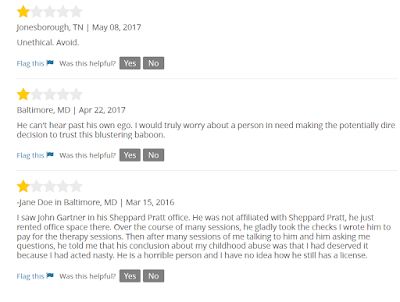 If you asked me to pick a face to exemplify a sociopath, his would be the face.    LOL linked in with the New York Times......      http://www.johngartner.com/

LOL he also writes in the Washington Post, about economics of mass immigration.

Bill Doherty brought together Trump critics and supporters across the nation in efforts to find common ground.

stock here----uh, how does that mesh with co-authoring a book to state that Trump is seriously insane in a number of ways, and asking for his impeachment.

he is the first signature on this 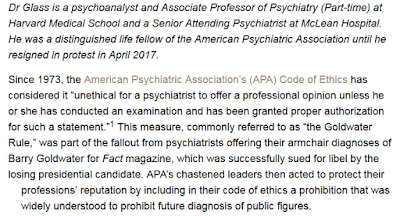 The APA responded by doubling down on professionalism

One month later, perhaps in response, the ethics committee issued a new interpretation of the Goldwater Rule. While the language of the underlying code remained unchanged, the committee’s new opinion made it clear that the prohibition was not restricted to making diagnoses, stating that it “applies to all professional opinions offered by psychiatrists, not just diagnoses.”4 The APA statement continues:
of the APA

To understand the ramifications of what they are trying to ascribe to Trump as serious mental illnesses (multiple), lets look at what these illnesses really mean----


The bottom line is that a narcissist is completely incapable of love and void of empathy.

It is interesting how many clearly false arguments and false associations are used.   I will repeat a phrase I used above, and please read after considering the following paragraph from the interview.

stock here----Consider this.   America is now down trodden with mental illness, way over medicated with dangerous stuff that sometimes helps depression, but we also find that mass murderers are very commonly on psychiatric drugs.

And the whole "Mental Health" industry is OK with this.   Turns a blind eye to it, participates in it, is complicit with the Pharmaceutical industry.    To call most of them "experts" when this obvious huge grievous disservice to the public is being foisted on them, is an insult to "science".

From the article, note the often used Nazi reference.


We have to contest it, because it is malignant normality. For the contributors to this book, this means striving to be witnessing professionals, confronting the malignancy and making it known.
Moyers: Witnessing professionals? Where did this notion come from?
Lifton: I first came to it in terms of psychiatrists assigned to Vietnam, way back then. If a soldier became anxious and enraged about the immorality of the Vietnam War, he might be sent to a psychiatrist who would be expected to help him be strong enough to return to committing atrocities. So there was something wrong in what professionals were doing, and some of us had to try to expose this as the wrong and manipulative use of our profession. We had to see ourselves as witnessing professionals. And then of course, with the Nazi doctors I studied for another book — doctors assigned, say, to Auschwitz — they were expected to do selections of Jews for the gas chamber. That was what was expected of them and what for the most part they did — sometimes with some apprehension, but they did it. So that’s another malignant normality. Professionals were reduced to being automatic servants of the existing regime as opposed to people with special knowledge balanced by a moral baseline as well as the scientific information to make judgments.


So in the mental health crisis of USA and elsewhere, the "witnessing professionals", but in the wrong way, seems to be very relevant.    stock here--- I don't see any justification for these 27 experts to claim a "moral baseline" when they go clearly out of their way in false arguments.....as exposed here:

He further goes on to state that the best case scenario is that Trump is a Psychopathic Liar and the truth is far worse than that.