911 Attacks Were an Outside and Inside Job -- Crossing the Rubicon

Crossing the Rubicon -- Internalizing the Knowledge that 911 Attacks were carried out by factions of the US government is a tough one for many  to wrap their heads around.    It is almost the magnitude of being to horrible to believe.    Once you make this mental jump, crossing the Rubicon so to speak, it is sure hard to go back to your old comfortable ways of thinking you knew enough about how the world really worked.

I added a video at the bottom, supporting my assertion that a small nuke or nukes were used to take out the center core of the buildings, which together with the unique "exeskeleton" structure, were both needed to collapse these building on their own footprint.   i.e. a demolition.   It also shows rock sub grade floors below street level, and the obvious melted rock look should capture your attention.


So in the winter of 49BC Caesar decide to take his army across the Rubicon and start a civil war. By crossing the Rubicon he had passed the point of no return, committed everything and gambled all. As he crossed the Rubicon he turned to his men and shouted the immortal words, "The die is cast."
On January 10th, Caesar, with his faithful 13th Legion marched on Rome. Over the next five years he fought, bribed and negotiated his bloody way to the top. 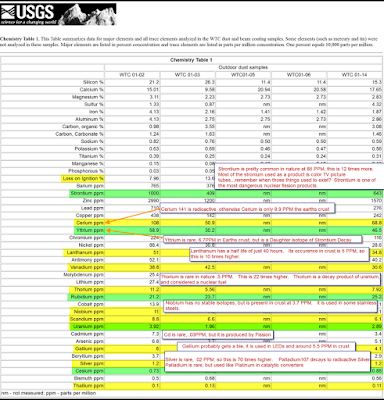 I did not "cross this Rubicon" until last year.    I found a source to USGS debris testing, and being an
expert in radiation, immediately noticed radio-isotopes that were present in ratios of hundreds of times more than would just be normal.