Hurricane Irma Update and Trend of Less Hurricanes, Not More 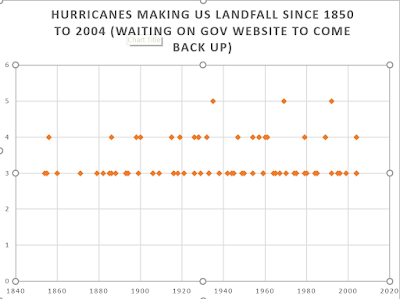 Recency Bias, it can affect anyone, even if on guard for it.

Hurricanes are becoming less frequent, although it does appear that larger hurricanes are being
generated, but there really are just a handful of Class 5 hurricanes that have made landfall in the USA. So that data is sparse enough, that I can't put much stock in it.

We have had a dearth of hurricanes, very stable weather

But then this apparently scientific and statistical approach, says it could be just chance.   kind of funny their reluctance to try to create a hypothesis, and instead just "conclude".   They must be paid gov climate "scientists" who can't think their way out of a grant bag. 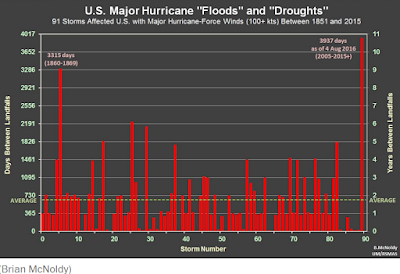 Hmmm......longest "drought" of hurricanes in recorded history, and NASA concludes it is "just luck", because otherwise someone might point the finger at the lie called man made global warming.

No Major Hurricane Has Made Landfall In the US In More Than 9 Years https://weather.com/storms/hurricane/news/major-hurricane-us-landfall-drought-study May 1, 2015 – A new study says that the current drought of major hurricanes making landfall in the U.S. may be due to luck.