I will update this article as information presents itself.   At the far bottom are maps of the nuclear plants and the projected trajectories.   But the story below is the real story, they are set up for flooding, like Fukushima.

Added at bottom, photos of 1992 Turkey Point serious damage to critical systems.   This storm was around 140MPH, Irma may be 200.    The way wind power works is a squared law.    Irma will be twice as strong.


I am reviewing the NRC Flooding Analysis post Fukushima.   Initial review is concerning.

Hurricane Andrew Hit Turkey Point 1992. There were a ton of "lessons learned" generated in a letter, but not implemented. The nuclear cartel has captured the NRC and the NRC has no balls to force them to shut down now.

Some very serious problems were close to happening, like a stack damaged and falling on the generator building, loss of that building would lead to a meltdown, a Fukushima.

The on site water tank collapsed onto the fire water system, destroying it. Any plant fire would not have been put out, and the result….a meltdown, a Fukushima


They have several flooding scenarios, one is LIP (Locally Intense Precipitation) another is the PMSS (Probable Maximum Storm Surge).

They store emergency equipment in other buildings as part of a FLEX strategy.   These systems need retrieval, movement, and installation in order to work.   This is not at all realistic during a flood.

See the green highlights, they are hanging their hats on the flood going completely away in 75 minutes.    SERIOUSLY! 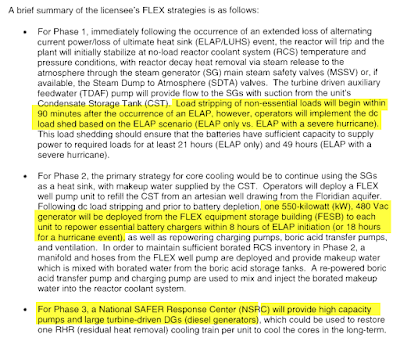 Then they are planning to bring a large generator from another building and install it.    AGAIN, in an emergency and a flood, they are not going to be able to accomplish this work.    The gensets should be in place and ready to go!!!! Not to be installed during a flood!    This borders on insanity

The Component Cooling Water (CCW) area is super important because if you can't cool the reactor and associated equipment, you can have a meltdown, think Fukushima.      The Turbine building is also super important, it "houses" the Critical Auxiliary Feedwater (CAF) Pumps which cool the reactor directly in an emergency.     But not to worry, the owner of the plant says these CAF pumps are 7.5 INCHES higher than the expected flood levels, so no further protection is needed.   And the Lap Dog NRC "agreed" with the owner. 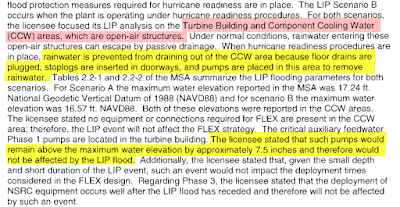 Amazingly, in an area subject to Hurricane flooding, and a steady attack of salt air, both critical "structures" are open air, they don't even have walls to protect the equipment.   See Salmon colored highlight. 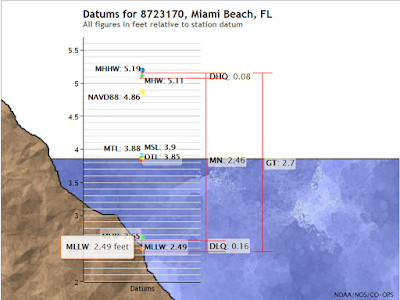 Amazingly though, since 1980, they reduced the maximum flood level.    It used to be 22.5 MLW
(Mean Low Water Datum).   See further below the new Max Level is 17.5 NAVD88 (A new Datum set in 1988 which is 2.21 feet higher than MLW see link).    Them bottom line though, is that even though there was a Datum change, they still reduced the level of the maximum probably flood, AFTER FUKUSHIMA.   Rather than get safer, they became more risky.

assuming that wind would only create waves of 4.2 feet.   If the waves are bigger then flood level would be even higher.    Here is the earlier source

Then they back it down again, see the blue highlight below.

Here is the NRC report on Turkey Point Flooding.   They cite tabulated values and summaries, but these are strategically not included with the document.   They want as few people as possible to understand the situation and assumptions, which a summary table would make it too easy.   Only those with the time, knowledge, and patience to do it will see how horribly inept their plans are.
https://www.nrc.gov/docs/ML1714/ML17143A034.pdf

Now the stronger Irma is predicted for a direct hit on both nuclear plants in Florida.    The captured NRC does not have the balls to demand a prompt shutdown.

I have made contact with both plants and asked them if they have a definite time-frame that they will shut down for safety.    Neither one has responded as of 30 minutes ago. 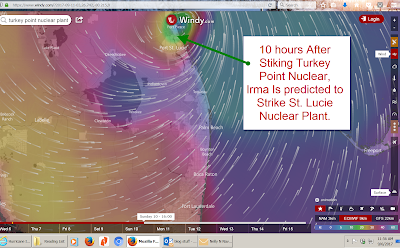 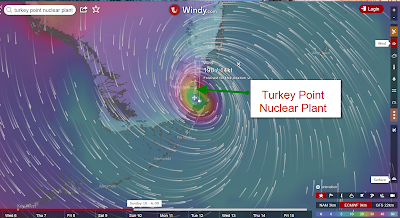 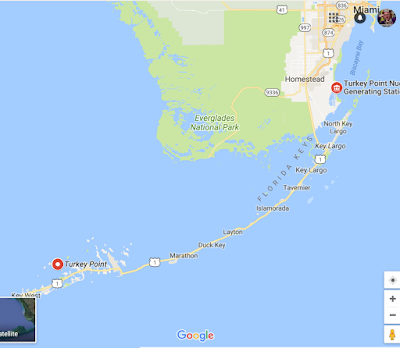 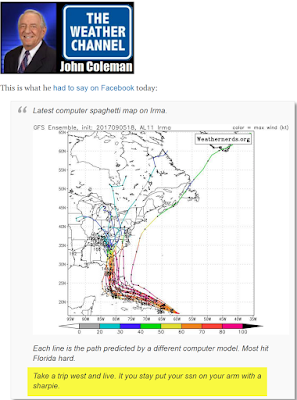 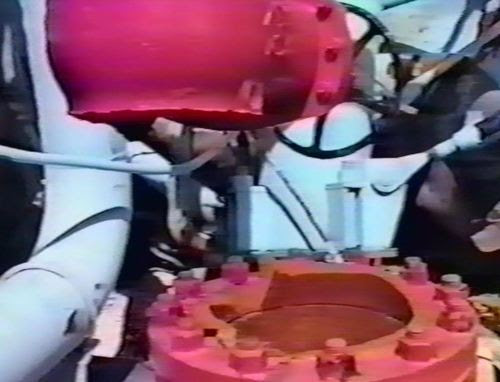 Figure 3.
In addition, the winds severely cracked the exhaust stack on the Unit 1 oil-fired plant. Figure 4 shows a close-up of the cracked exhaust stack. If’ the damaged stack had fallen, it could have landed on the building housing the emergency diesel generators for the nuclear units. Considering that the diesel generators were the only source of ac power at the plant for several days, it was extremely fortunate that the leaning stack of Turkey Point did not fall. 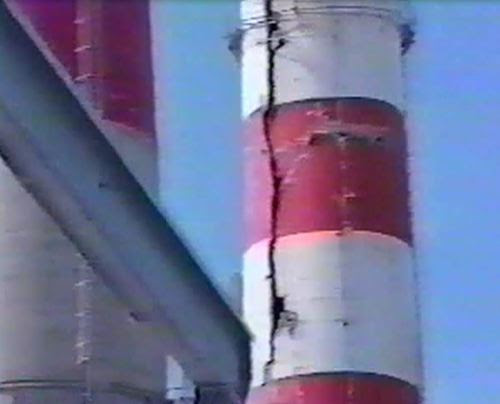 Our Takeaway
A nuclear plant should be designed to withstand the forces of nature expected at its location. Hurricanes with winds up to 175 miles per hour occur in south Florida. A good design would not have high winds disable the fire water system and seriously challenge the backup power system. It’s just wrong to design the emergency diesel generator building to withstand high winds but construct it within falling distance of a heavy stack likely to be toppled by high winds.