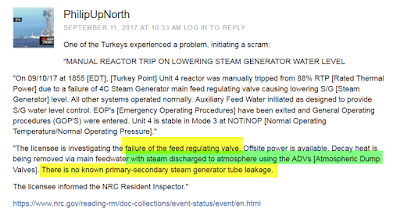 All the drama and buildup to Hurricane Irma, surrounding the threatened nuclear reactors at Turkey Point, but the real news happens after the hurricane.

I wrote the following in the comments section in response to a gov nuclear guy who wants this to be "no big deal" but it could be.

Turkey Point 4 has a refueling outage 10-31-17.    They would do anything to not have to shut that reactor down, along with the increased inspections, review of all the service interval documentation, and most likely, the NRC finding that FPL was non compliant on some important issues, and would therefore not let them restart.    FPL would rather save this non-compliant work items for the shutdown.

They also don't need any bad press at this time, I read somewhere that they go to trial in October for the ongoing tritium contamination that they have been busted on, after they knew about for years and did not report it.

Basically, they would have done anything not to shut this reactor down.   Once a plant is shutdown, and has many problems, there is a decent chance that it is shut down forever.

So even when they noticed the water levels dropping in the steam generator, they were trying to come up with some type of fix in order to avoid the SCRAM.   While they were trying, the automatic systems initiated the SCRAM.    It is much better to SCRAM from a lower output level, lower temperatures.    SCRAMing from a high output puts a lot more shock on the system, again, not just putting more wear and tear on everything, but increasing the chance of something really going wrong.   They SCRAMed from 88%, a high level, and curious why it was not 100%.

They claimed it was a manual SCRAM, but this is not credible for the reasons above.

A reporter from World Nuclear News contacted plant operators and got the information on how the plant had auto SCRAMed itself.    Whoever they talked to "did not get the memo" that the NRC was going to report that it was a "manual SCRAM" meaning that they were really in control of the situation.


Unit 4 shut down automatically on the evening of 10 September

Ah, but you miss the main points:
1) Plant was running at 88% prior to "manual scram", which I believe to be an automatic SCRAM but they wanted to pretend they were in control
2) This is coincidental with the hurricane and shutdown of the other reactor.   This is suspicious of a more important underlying problem
3) FPL made it a point to have NRC state there are no know major problems with the steam generators.   Which makes me think the lady doth protest too much...why belabour this point, unless of course there was leakage, and therefore cross contamination and thus radiological release.   The original steam generators only lasted 8 years, they were replaced around 1982, so the new set is now 35 years old.   hmmmmmmm

Also FPL's 2014 attempt to cover up a steam leak on this aging plant is duly noted.   They pretended their shutdown was a "pre-planned evolution"

Pressure to max out profits from this aging plants are clear cut as shown by the 2008 outage...

David Hoffman, a nuclear supervisor at Turkey Point, resigned over the incident and was subsequently sued by Florida Power and Light for return of a bonus. Hoffman countersued, claiming he was pressured to restart the reactors while they were in a condition which in his judgment made it unsafe to do so. Upper management wanted the reactors restarted during xenon dead time, which would have led to the operators at the controls having to continuously step control rods to safely manage reactor output.

Sunday 18:55 Reactor only running at 88% for some unknown reason 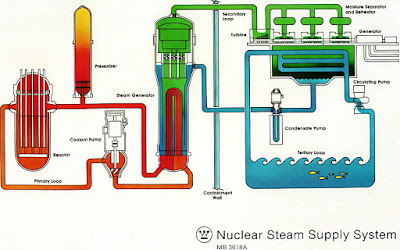 
The blue juice in one of the 4 steam generators go too low, so they pumped more in. The red juice got angry at all the commotion so the operators shut the reactor down. The reactor operators don' t like it when the red juice wants to leave the containment building and comes to visit them.
Unusual that reactor was at 88% – something else was happening that they're not saying.

My suspicion was correct, it was an automatic SCRAM from 88%. If they wanted a more controlled manual SCRAM they would have taken it to 30% or so.

Two nuclear units at St Lucie were able to continue operating as Hurricane Irma made landfall in Florida. One unit at Turkey Point was shut down as a precaution in advance of the storm as nuclear operators and regulators put storm preparation procedures into action, while the other shut down automatically because of a valve-related issue.
============================================
Mining Awareness always does good work.    He/She picked up on this story and ran with it.