"Fluoride Stare" -- Do People Just Not "Get It" Anymore, Or Do They Get It But Just Don't Care? 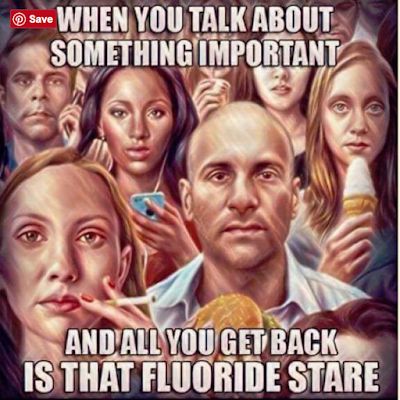 So how to "get rid" of this nuclear byproduct?    Put it into municipal drinking water at "low levels"

Downblending is becoming more and more "popular".    But when you have 100 toxins entering your water, air, and food everyday....and non are at toxic levels, but combined....we are all sick, fat, and cancerous.    Time to wake up, before corporate and governmental idiocracy kills us all.

This study from Harvard shows an average IQ drop of 7 points among 14 year olds that drank fluoridated water.     If that isn't enough to "stop the madness" what is?

The average loss in IQ was reported as a standardized weighted mean difference of 0.45, which would be approximately equivalent to seven IQ points for commonly used IQ scores with a standard deviation of 15.*  Some studies suggested that even slightly increased fluoride exposure could be toxic to the brain. Thus, children in high-fluoride areas had significantly lower IQ scores than those who lived in low-fluoride areas. The children studied were up to 14 years of age, but the investigators speculate that any toxic effect on brain development may have happened earlier, and that the brain may not be fully capable of compensating for the toxicity.
“Fluoride seems to fit in with lead, mercury, and other poisons that cause chemical brain drain,” Grandjean says. “The effect of each toxicant may seem small, but the combined damage on a population scale can be serious, especially because the brain power of the next generation is crucial to all of us.”

stock here:  Above point, is well, exactly my point.    "Scientists" do study after study to show that "we cannot prove that this chemical at these levels, sor sure causes harm".   And that is the great lie, the combined damage from 10 or 100 chemicals is what is taking us down.

What follows is a blatant plagarism from a reader.   trump that.

It's a lovely banana republic we call America, wherein comes news that contradicts 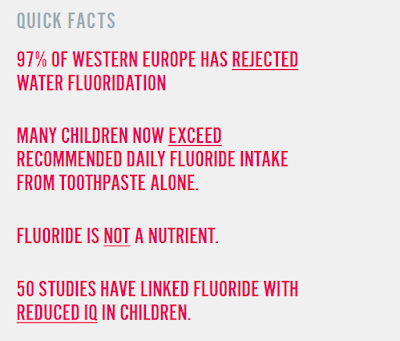 decades of official assurances that water fluoridation is safe and effective.


It seems that some black folk got uppity when they noticed new science saying they were disproportionately harmed by fluoridation in relation to the rest of the population.


It really bent the CDC dental office when it learned that Andrew Young, one of Martin Luther King's closest associates, was asking questions and taking names. That sent them off in a tizzy to the trade org that sets standards for the dental industry. What standards; what assurances? It turns out that the library of CDC and ADA studies showing safety and effectiveness is scant to non-existent. "Oh no! What to do?", cried the emails passing between Atlanta and Chicago.

This month marks the fifth year since the City of Fairbanks, heeding the call of its residents, turned off the fluoride pumps. Sixty years of running down a cold trail; affected DNA will require years to recover but at least the mistake was corrected.

Anchorage has yet to awake from its stupor, where it dumps tons of microbe-killing poison into the watershed before finally taking residence in beluga whale and salmon habitat. If you know Anchorage folks who ought to be paying attention, turn their heads north. Gently. One of the symptoms of fluoride exposure is muscular stiffness.