stock here--publishing in draft format.   My computer is running a special data recovery program.   I tried to repartition my drives to provide enough room for photo management and backups, and in that effort, lost my entire data drive, which became recognized as unformatted.   I had a recent OS system image that I was able to transfer to a nice brand spanking new 3 TB drive, and then reset the bios to boot from the new drive so I could work on the "old drive", it is just 49% done but found 7,125,000 files, so I hope it is doing well.

GOM posted this video at ENENEWS, it shows pretty much the whole JWO agenda in less than 3 minutes. Now you don't also get their strategies in 3 minutes, you need to dive down the rabbit hole a bit for that. And check the comment section, there are so many people who are awake, and lambasting this propaganda. Funny how the true believers don't show up. Also note how there are like 5% white people in this video, hmmmmm.

Bottom line...must let it run, and hope.   My most important stuff is on a hot swappable file server with 2X backup, but losing my local data drive would suck big time.

So I can't finish until I can reload "Snagit" which had components on the failed partition.

The partition adjustment occurred while using Acronis Disk Director 11.    Their support is pretty much non-existent, although their website pretends you can get support, but it is a guise.    They were a great product 10 years ago, now becoming close to dysfunctional. 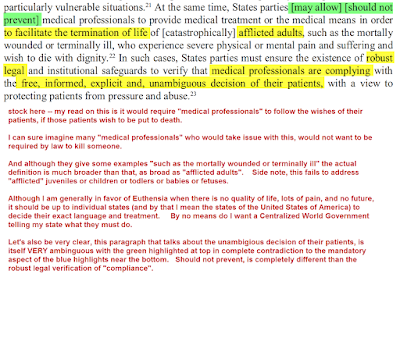 stock here -- my read on this is it would require "medical professionals" to follow the wishes of their patients, if those patients wish to be put to death.

I can sure imagine many "medical professionals" who would take issue with this, would not want to be required by law to kill someone.

And although they give some examples "such as the mortally wounded or terminally ill" the actual definition is much broader than that, as broad as "afflicted adults".    Side note, this fails to address "afflicted" juveniles or children or toddlers or babies or fetuses.

Although I am generally in favor of Euthanasia when there is no quality of life, lots of pain, and no future, it should be up to individual states (and by that I mean the states of the United States of America) to decide their exact language and treatment.     By no means do I want a Centralized World Government telling my state what they must do. 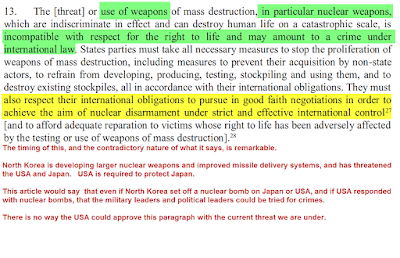 The timing of this, and the contradictory nature of what it says, is remarkable.
North Korea is developing larger nuclear weapons and improved missile delivery systems, and has threatened the USA and Japan.   USA is required to protect Japan.

This article would say  that even if North Korea set off a nuclear bomb on Japan or USA, and if USA responded with nuclear bombs, that the military leaders and political leaders could be tried for crimes. 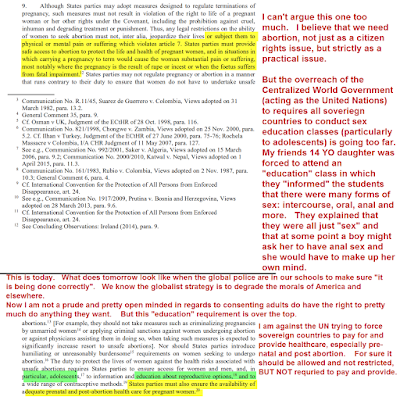 I can't argue this one too much.   I believe that we need abortion, not just as a citizen rights issue, but strictly as a practical issue.

This is today.   What does tomorrow look like when the global police are in our schools to make sure "it is being done correctly".   We know the globalist strategy is to degrade the morals of America and elsewhere.
Now I am not a prude and pretty open minded in regards to consenting adults do have the right to pretty much do anything they want.    But this "education" requirement is over the top.

Encouraging black men to put their lives at risk by disobeying police orders is disgusting. 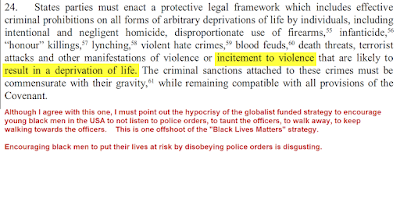 
I could see why many countries would have a problems with the Centralized UN telling them how to
do Gun Control, Knife Control, Taser Control.


And then requiring the "State" police or a UN Police to continuously supervise within each country, their

1) Private entities
2) Transportation
3) Hospitals (must make sure those Doctors are doing what the UN wants)
4) Security firms.

Anyone see any possible problems with that? <sarc>

“We must realize that our party’s most powerful weapon is RACIAL TENSION. By propounding into the consciousness of the DARK races, that for centuries they have been oppressed by Whites, we can mold them to the program of the Communist Party. In America, we will aim for subtle victory. While inflaming the Negro minority against the Whites, we will endeavor to instill in the Whites, a guilt complex for their exploitation of the Negros. We will aid the Negroes to rise in prominence in every walk of life, in the PROFESSIONS, and in the world of SPORTS and ENTERTAINMENT. With this prestige, the Negro will be able to INTER-MARRY with the Whites and begin a process which will deliver America to our cause..”