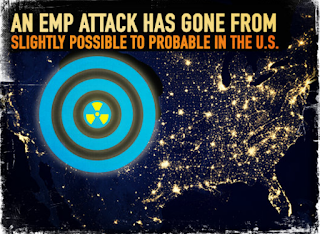 stock here - The source documents from the Gov are halfway down on this article.

A little background, prior to me becoming a solar expert, I had an unusual specialty in Hawaii and Guam, designing, building, and protecting advanced military communications and power systems from "HEMP" more commonly known as EMP Nuclear Weapons.

Funny, I also got my first real solar training at Anderson Air Force Base in Guam. 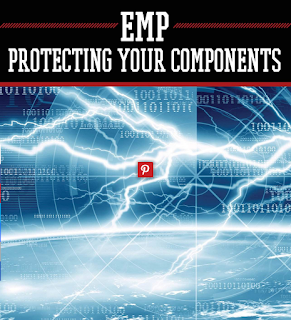 So let's drop to the punchline.   The US believes that North Korea is planning an EMP attack on the homeland.

This is real folks.      But "they" are taking this CME / EMP world changing event seriously.   What is interesting is that they have done these simulations in the past, but just described it as a "massive nationwide outage" without attributing a cause and also stating that it is "not likely".

Conspiracy anyone?   This year, they specifically attribute the nationwide communication failure to a Coronal Mass Ejection (CME).    This is interesting because a CME would have to be really massive, unprecedented to actually fry electronics.    CMEs in documented history have fried out power line and transformers, but to fry out electronics and especially electronics that are not connected to the power system, would require a CME that would make the Carrington event look small.

So methinks that they are specifically attributing this nationwide loss of comms to CME because they don't want people thinking that the total loss might come from a North Korean nuclear EMP weapon.    Methinks they have credible evidence that North Korea does have an EMP weapon.

US Gov and working with a wide base of civilian HAM radio operators will simulate a "Very Bad Day". 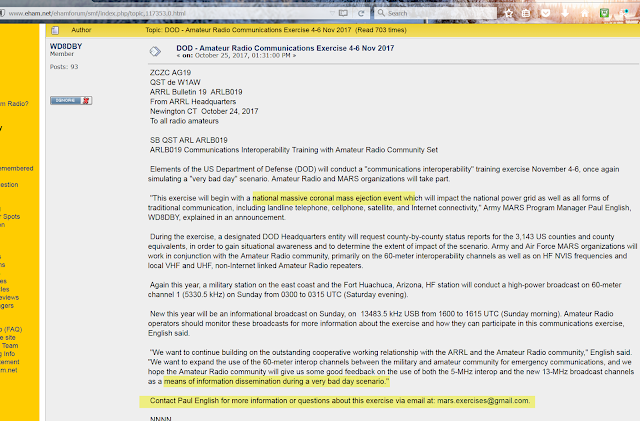 They have done these in the past, 2016 for example 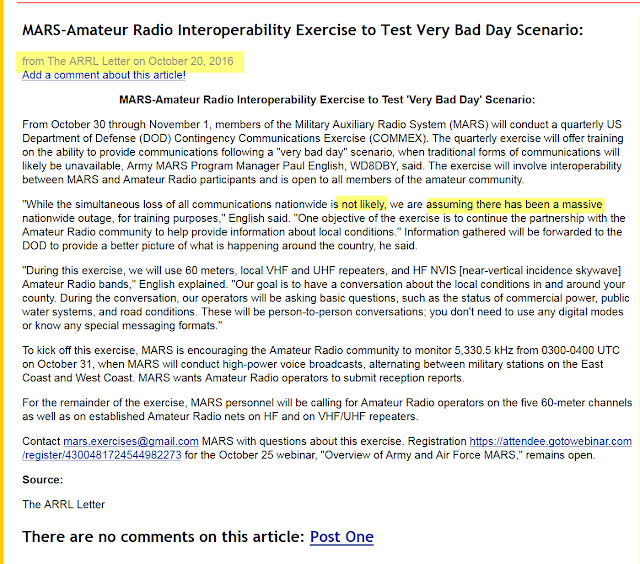 Sorry, I smell a little fear porn here.  Been heavily into all kinds of electronics for over 60 years.  We have recently experienced many M-class solar flares with CMEs [coronal mass ejections].  All you get from an M-class flare are spectacular auroral lights, and some changes to HF propagation for a short period, along with VHF & UHF skip.  We just had a low level X-class flare with no discernable effect because the proton stream was directed into space.  Yes, there have been many events in the 20th century stronger than Carrington, which blew out power lines and transformers.  All the world's tv sets were not wiped out, and refrigerators still worked. [after the power was restored].

"The Quebec Blackout was by no means a local event. Some of the U.S. electrical utilities had their own cliffhanger problems to deal with. New York Power lost 150 megawatts the moment the Quebec power grid went down. The New England Power Pool lost 1,410 megawatts at about the same time. Service to 96 electrical utilities in New England was interrupted while other reserves of electrical power were brought online. Luckily, the U.S. had the power to spare at the time…but just barely. Across the United States from coast to coast, over 200 power grid problems erupted within minutes of the start of the March 13 storm. Fortunately none of these caused a blackout."

Earth wasn't destroyed, and people didn't melt on the sidewalk, like some of the tards want everyone to believe.

If we receive a CME from a major X-class flare, there will be some permanent damage, but you have to remember that vehicles are already hardened to some extent by -

A.  Not being grounded [i.e., the pulse of electricity won't be grounded thru the vehicle]

Your car or truck radio may blow out, but not necessarily the engine computer.   Newer vehicles with On Star, etc. and which have the engine computer connected to an outer antenna may be especially vulnerable, which may, in fact, be all newer models of cars and trucks.

I believe the FBI and/or L.E. have pulse guns which can disable engine computers at very close range....this may not necessarily apply to a CME or EMP event, as the energy from such an event would dissipate according to the square of the distance between object and pulse generator [nuke].  For example, if you are 600 miles from Omaha and some "entity" sets off an atmospheric nuke at an altitude of 300 miles directly above Omaha, you would be around 854 miles from the blast point, and the pulse would have dissipated just due to distance in space.  I, personally, would not expect damage to an engine computer at that distance.

For example, during the Soviet EMP tests in 1962 over Kazkhistan

anything connected to long lines, i.e. power lines or really long antennas, was blown out.  This would include power company electrical switchgear as well as large transformers and substations, much like the 1989 Quebec situation.

Internet may survive partially or perhaps nearly intact because most of the net is glass fiber [fiber optics, or FIOS].  The equipment which feeds the fiber may be blown out due to power line problems.  Cell phones may be useless because the cell tower antennas will receive a direct energy blast.  The cell tower receivers would be first to go.

As far as the Nov. 2-6, 2017 MARS drill [Military Aux Radio System], [and FEMA drill], amateur operators have nets which meet on-air weekly, and some even conduct daily drills and net check-ins.  These drills are for equipment checks and operator training for situations like Puerto Rico, etc.  The Nov. 04, 2017 date may mean nothing, but it is an interesting
coincidence.  I doubt the author of this article, above, has any special insight into a govt. planned event.  We can only watch.
Posted by Stock at 11:40 AM