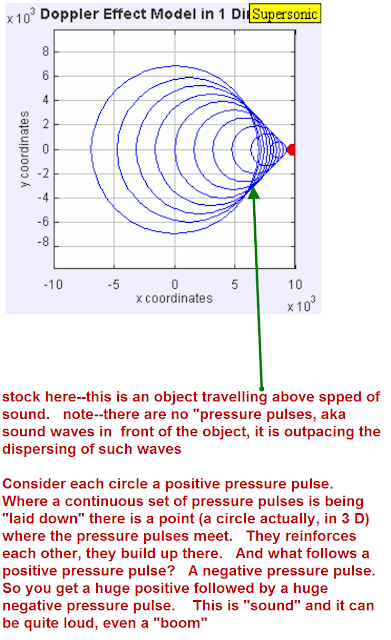 I think you will find this interesting, even if you are an engineer type, you might not understand this phenomenon called the sonic boom, but I think I can Bring It Home for you.

Many people are trying to decipher what really happened by listening to shot sounds, to determine
different caliber ammo being used, and perhaps "number of shooters".

Some have proposed that a bullet that can travel faster than speed of sound will make a sonic boom as it transitions from subsonic to supersonic, AND also another boom when it slows down from supersonic to below the speed of sound. There were also echos occurring in the LV coverage.

Some bullets are designed to fly supersonic -- above the speed of sound.    Shouldn't they break windows like the Concord used to?

Do they make a sonic boom?   Yes.   But they are small so you are not going to blow windows out.   The shape, length and max cross sectional width are important in how much "sound" aka pressure pulses, are made. 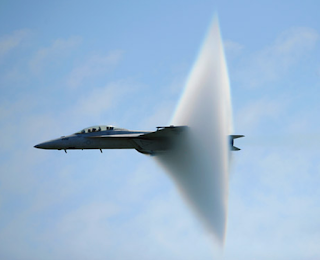 So let's clear something up right away.    Many people see a photo like this airplane "passing through the speed of sound", and that feeds into the idea that a sonic boom is a one time event that occur while passing from below to above speed of sound.     But that is wrong, get past that thinking to really understand it.

A sonic boom is not a singularity, not a one time event. Sonic boom does not occur when an object accelerates from a subsonic speed to a supersonic one, so it does not occur in the opposite case either.

Nothing special happens in either case, except that the aerodynamics of the object change. An object moving at supersonic speeds leaves behind a conical shockwave, like the bow wave of a boat but in 3D.

Sonic boom is what occurs from the perspective of an external observer when the shockwave passes them. Thus, sonic boom is not a single event, but every observer hears their own sonic boom at a different time. Anyone moving along with the object, such as the pilot of an aircraft, will not hear a boom.

The first example here is an object moving fast, but below the speed of sound.    Note that there is no place where the pressure pulses, i.e. sound waves all build up, they propagate forward and backward, pretty normally.