Why is the Deep State Using Football Knees As It's Venue?

Why would black men, some getting paid millions per Football game, want to create controversy, unrest? 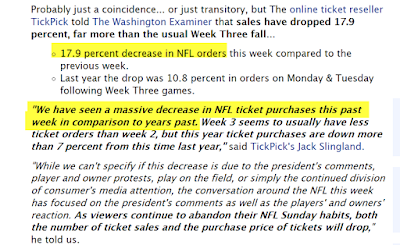 My first, not complete thought, was that it was because they are part of the entertainment industry.

We know the powers that be have bought up the media and the entertainment industry.    You'll have to do your own Googling to convince yourself of that one way or the other.

If you aren't already there in knowledge, AND also not willing to spend 30 minutes in a first step to really understanding what is going on in the world, then running down this rabbit hole with me is not going to be productive.

This latest "fad" is interesting to say the least. This is where we bring in some intuition, common sense, and knowledge of the human animal.

My first theory was that "Patriots like sports".     I was at the Green Bay / Bengals game at LAMBEAU FIELD!    Seems that every game, they have a fly over by some kick ass Military craft.   What other sport gets that?    Hot Dogs, Apple Pie, and Kick Ass Military Craft, what could be more American than that?

The JWO (thats my funny term for the Jew World Order a play on New World Order, since 90% of the James Bond Villain class sociopathic arsholes that somehow need to control the whole world are Jews)...the JWO want to degrade American society and stability and pull their control and wealth out of the chaos.    A prime component in creating instability is to divide the country, which they have been doing for years.

So my first theory, and it still applies, is that they wanted to further divide the sports loving Patriots, and so they came up with the "Disrespect the National Anthem" meme via kneeling, instead of hand over heart.

But that didn't sit well, well enough.    And I think I have more of the answer now.

After a big Football week and weekend, I was reflecting on how many places, even small colleges have football teams, and how people loved to participate in this type of "battle".    The Packers whooped up on the Chicago Bears, swinging the long term win loss into the Packers advantage for the first time in 84 years.    Kind of big, one of the greatest rivalries in sports.     Then Northwestern went up against the Badgers, David versus Goliath in a way, Northwestern just has 7000 students, and Wisconsin is over 50,000.   So Football was on my mind.

The level of "love of sports" has always amazed me.    I was an Equipment Coach for Northwestern's team, as well as actually playing a Big 10 sport myself, which was Waterpolo.    But standing on the sidelines at Northwestern games gave me a sense of the majesty of the game.

There seems to be some need for people to get "enough fighting".   Evolutionarily, it makes sense.   If groups of peoples were too peaceful, the competition would be less, extending into reproductive competition also.     Sports lets people play out their need to be part of a fight.    It's a good relief valve for society, a necessary one.

And Football being the most violent of the organized fighting that we (mostly) all love, is the Battle Royale.    So if some evil James Bond type villains wanted to increase the stress on a society, to increase the need to fight, what could be more perfect than to take away /reduce the efficacy of society's relief valve?

So the Football Knee to the Groin of America is a "wonderful" one two punch.


"They" have just not been able to get enough civil strife, civil war by their current tactics.