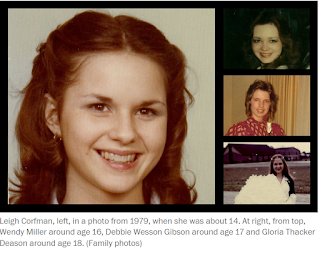 I am not defending Roy Moore here, because basically none of us really know what happened, in the case of said 14 YO Leigh (Picture at right supposedly at age of 14)

My take after quite a few hours of research?   He probably did take this girl on a few dates, and probably made an advance.    3 other girls in the story, all of legal age, said they never got beyond kissing, so he must have been quite a gentleman in that regard.   My other take is that he probably didn't know she was 14, she looks older than 14, and he didn't ask and she didn't tell.   She has had a chaotic life including being sued for not paying taxes for many years.

So use this page as some perspective.   This story was created by Zionist Jeff Bezos' Washington Post,  per Leigh's mother, they kept pestering Leigh 6 times to get a story.

Hannity (we spoke of him prior as being the next biggest target for the NWO to get rid of after they sacked Bill O'Reilly.) got himself in the rifle sights of the left, just by giving Moore some leeway to defend himself.   You be the Judge.

Age of consent used to be 10 or 12 almost everywhere in USA and elsewhere around 1900, Google it.

It should be obvious that 10 or 12 is "too low" but times change and the realty of "getting by" back in the day is something hard to picture.    One of those ways was early marriage.

Political correctness was harshly rewarded back then with things like starving or freezing. 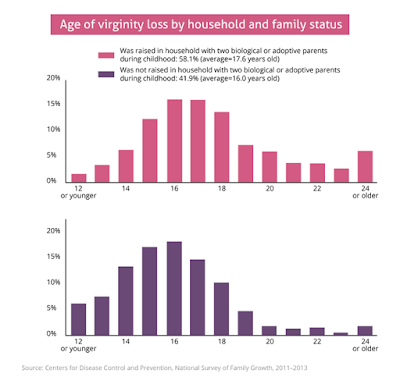 There are a lot of statistics that blanket the web which promote the idea that the average age of "loss of virginity" is right around 18 YO for males and females.    In this context, an age of consent of 16 seems pretty normal.    But that statistic is misleading, it is similar to lie about "Average Life Expectancy" which I covered in an article.

You can see how almost half of people start having sex at 16 or before, with the average being skewed upwards by a significant group that doesn't have sex until mid 20's or later.


The large text below goes to the story created by the WaPo.

Blue is my comments, Black is direct quotation from the WaPo article

The big "news" would be 14 year old  Leigh Corfman.   Even in the article above, by the Washington Post, who created this story, who found all these females, even in the article, they dance around the issue of any sexual contact, insinuating as hard as possible, but not coming straight out and saying so.   Read it closely.   This is all lawyered up, so quite possibly they want to juice it as much as possible, while still making a slander or defamation suit harder to press.

Below is the "fluff filler".   For sure there is no illegal stuff occurring in any of the 3.  So the addition of these three makes the "narrative" clear cut.


Aside from Corfman, three other women interviewed by The Washington Post in recent weeks say Moore pursued them when they were between the ages of 16 and 18 and he was in his early 30s, episodes they say they found flattering at the time, but troubling as they got older. None of the three women say that Moore forced them into any sort of relationship or sexual contact. 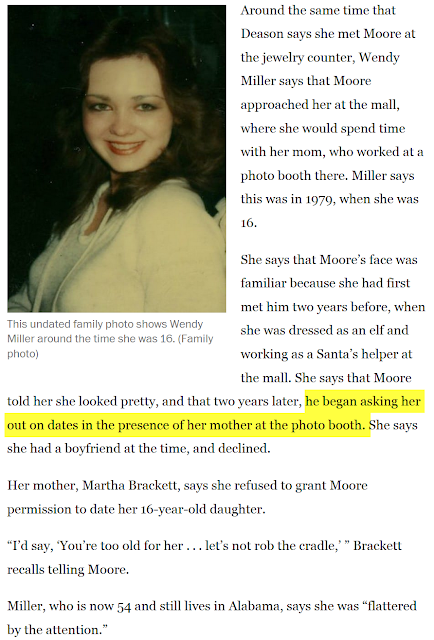 Wendy Miller says she was.....16 when he asked her on dates, which her mother forbade.

hmmmm, so the first girl that the "article" presents to us, is the youngest.   But they never had any date.   Does it seem credible that he would ask her out, and i mean ask "her" in front of her Mom?   Any gentleman in that situation would clear up quickly any possible overriding objection, and would have asked the Mom if it was OK take take her daughter on a date, probably even when Wendy wasn't there.

so the "began asking her" implies that he got turned down at least 2 times and maybe multiple times in front of both the daughter and the Mom.   It's possible, but it sees kind of weird.    Anyway, the age of consent is and was 16 in Alabama, so I guess this is just "filler material" to set precedent that he liked young women. 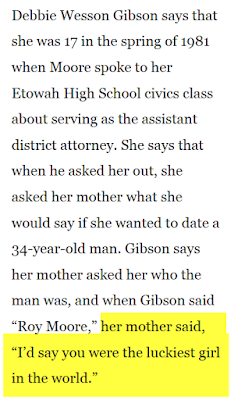 The pictures below show Debbie Gibson, one of the so called "accusers".   She now campaigns for Moore's opponent in the Senate race that is open because Jeff Sessions left. 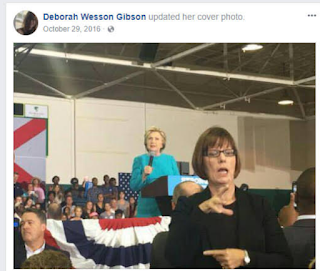 Debbie Wesson Gibson says she was 17 when Moore spoke to her high school civics class and asked
her out on the first of several dates that did not progress beyond kissing. 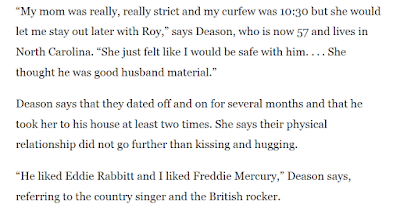 Gloria Thacker Deason says she was an 18-year-old cheerleader when Moore began taking her on
dates that included bottles of Mateus Rosé wine. The legal drinking age in Alabama was 19.

Kind of funny, "after multiple interviews" kind of hard to imagine women in their 50's wanting to take time for multiple "interviews".    Were these phone calls?   Were some offers made to them?   What were they told that they would possibly want to change their mind about "speaking"?

She remembers going inside and him giving her alcohol on this visit or the next, and that at some point she told him she was 14.

I don't think the above is likely.   A young girl, self admittedly  flattered by the attentions of an older man, is not likely to rock the boat, don't ask don't tell when it comes to age.   But of course, the Washington Post would need to establish that he was clearly informed about her age, to prevent the I didn't know she was under 16 defense.

In Alabama, the statute of limitations for bringing felony charges involving sexual abuse of a minor in 1979 would have run out three years later, and the time frame for filing a civil complaint would have ended when the alleged victim turned 21, according to Child USA, a nonprofit research and advocacy group at the University of Pennsylvania.

Mnuchin on Roy Moore: ‘It Appears That There Is a Significant Issue Here That Needs to Be Addressed’

We have seen a lot of dirty hits on good candidates over the years. That could be the case now, or it might not be.

However, the people of Alabama should take into consideration Judge Moore's 40 years of exceptional public service, service that won for him the love and respect of the people of Alabama.
And additionally they should consider the many, many times he has been the object of opposition research and consider if the timing of this allegation is suspicious.

Only after weighing all those considerations should the good people of Alabama make a decision.


Look, I'm sorry, but even before these reports surfaced, Roy Moore's nomination was a bridge too far.
— Senator Bob Corker (@SenBobCorker) Nov. 11, 2017

Others, though they included the caveat (of if ti's true), seemed more inclined to jettison Mr. Moore.

Jeff Flake of Arizona said Mr. Moore should step aside “if there is any shred of truth to the allegations,” and Susan Collins of Maine and Ben Sasse of Nebraska spoke similarly. Patrick J. Toomey of Pennsylvania and Tim Scott of South Carolina said they found the accusations more believable than Mr. Moore’s denials; Rob Portman of Ohio said he assumed they were true because the women making them were on the record. And Lindsey Graham of South Carolina said Mr. Moore “should be dealt with very severely” if he behaved as reported.

“Any person who believes these allegations are not that bad,” Mr. Graham told ABC’s affiliate in Columbia, S.C., “I don’t want them to be a part of the Republican Party.”

And another  "new accuser" 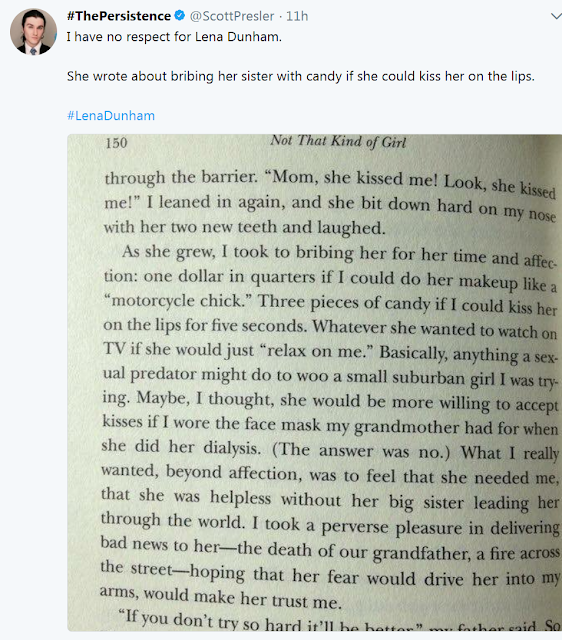