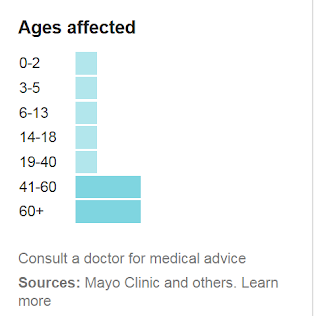 Had friends in from out of town, went to visit other friends too, one ladies' husband was a super nice guy always making sure everyone at the party had whatever they wanted….died last December 21, solstice day.

Big surprise to us and super quick, he had pancreas cancer (same thing took Steve Jobs down) which is often not diagnosed until it is too late, and it readily spreads to other organs, so sometimes its called the silent cancer.   It is predicted to be the 2nd most deadly cancer by 2030.

EXECUTIVE SUMMARY
Screening would be effective.


Using mathematical models to study the timing of pancreatic cancer progression, the scientists conservatively estimated an average of 11.7 years before the first cancer cell develops within a high-grade pancreatic lesion, then an average of 6.8 years as the cancer grows and at least one cell has the potential to spread .

Green tea (you can buy it in a pill) is shown to reduce pancreatic cancer risk.

But there are “signs” but these signs come too late almost always.    I also have friends that have lost loved ones in Hawaii, from this.

50% of all victims have these 2 signs, however, once you have these symptoms, it may be later stage and too late.

Causes – Many Pancreas cancers have no identifiable cause 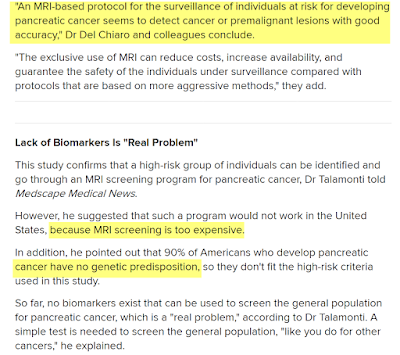 There is basically no commonly available way for early detection, and the new strategies of the “medical system” are to not screen for pancreas cancer  AT ALL.

So like all other modern medicine, your health is controlled by for profit corporations, who insist on rationing care and it’s getting worse.   Knowing what to say and how to say it may get you better treatment.    Doctors have to justify every test to insurance companies, so they need  a reason to request a test.    Family history / genetics is one of the best ways.

There is a blood test that looks for “CA 19-9” but it doesn’t always get produced even if you have pancreatic cancer, and sometimes there is a false positive, and sometimes, if detected, it’s already too late.    So they use this as an excuse to not test at all, see how that works?

Your best bet for getting tested is to explain any family history of pancreas cancer, but history of other types of cancers of course it needs to be direct blood relatives.

They can test for gene changes which can show “increased pancreatic cancer risk”
Endoscopic ultrasound is a newer test for detecting early p/cancer.   They won’t give you this unless the genetic test shows increased risk, or you have “a strong family history”

CT scans can be used, but these involve thousands of X-ray in just seconds, so the radiation dose is unacceptable high.  Like 20 years of radiation in a few seconds.   CT should be outlawed, as MRI is superior is all aspects, except some specific bone imaging.   But they still have these CT machines and the people who know how to use them, so they still use them.

A special kind of MRI called an MRCP can give high-quality pictures of the pancreas, the pancreas duct, and the bile ducts.  However, some patients who are claustrophobic may decide against having an MRI performed.

Some doctors will prefer an Endoscopic Ultrasound over even the MRCP/MRI because they can also get a biopsy at the same time, a biopsy is a tissue sample they can get with a very fine needle.   The “Endoscopic” means they stick a tube down your throat with the ultrasound and a tissue gathering needle.   They also feel that they can get a better view of the pancreas than with the MCRP/MRI, but that seems a little sketchy to me.   I think they like the “biopsy” approach because then they have “proof”.     But the problem with taking byopsies is that if you are poking into cancer stuff, you can also spread the cancer right then and there.

https://www.ncbi.nlm.nih.gov/pubmed/11297271
from the above, it is callous how they say that if your chance of getting this horrible cancer goes up 650% it is “not significant”

On the above article link, I signed up for a “Medscape” account as a “medical educator”

They have a bunch of interesting stuff, like up to 30% fat is “good for you”, see here, but you might need an account.   This guy headed a study on 135,000 people, and showed it to his mom who said “duh that what my grandma and her grandma knew all the time.”

They also prove that eating animals, makes you less likely to be depressed.   Another duh!